The stars must be right! 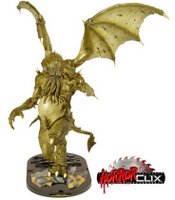 As if it weren't already a sure thing that I'd shell out money for WizKids' new HorrorClix Collectible Miniatures Game, shipping this summer, now I've learned that Cthulhu will be included in the first set. Ia! Ia! Cthulhu fhtagn!

Of interest to comics and gaming retailers, WizKids is making the first set of all of its new products returnable. Maybe if comics publishers would make the first three or four issues of any new series returnable, shops would have more incentive to promote new series. And publishers would have less incentive to slap a new "No. 1" on every reboot.
Posted by Franklin at 1:33 AM