Since then, the titular penny has lost more than one-third of its value, according to the inflation calculator at www.usinflationcalculator.com. Yet the movie is set in the 1930s. So, take the TARDIS farther back, to the dark days of the Great Depression, and a penny from today suddenly has the purchasing power of 14 cents.

It's like when baby Kal-El journeys from Krypton to Earth, gets super powers and becomes Superman. In the past, the penny becomes the Superpenny, able to buy the stuff of 14 ordinary pennies.

But here in 2013, the penny is just the lowly penny. People drop them on the sidewalk and can't be bothered even to bend over and pick them up. A penny just isn't worth that much time and effort, and besides, my back hurts. From a monetary point of view, the penny is now a bigger wimp than Clark Kent ever was.

That's why there is a movement afoot, once again, to do in the penny once and for all.

Some groups like Citizens to Retire the Penny have campaigned to eliminate the penny from circulation for years, and President Barack Obama recently added his voice to those calling for change in our change. But so far they have been no match against the feared zinc lobby, or, as I like to call it, Big Zinc.

Yogi Berra once quipped, "A nickel ain't worth a dime anymore." That isn't just a truism; it's economics. About 100 years ago, a penny was worth roughly a quarter, adjusted for inflation. But after a century of Federal Reserve-backed monetary expansion, a penny ain't worth a quarter anymore. It ain't even worth a penny.

Other governments have already killed their pennies. Canada ended production of its 1-cent coin earlier this month. As governments inflate their currencies, lower-denomination coins cease to be worth minting, or even face value. It costs the U.S. government 2.41 cents for every penny it mints.

By that standard, the penny is worth more dead than alive. You're better off melting them down and selling the zinc back to the U.S. government to make more pennies. If "Seinfeld" were still on the air, this would be a great get-rich-quick scheme for Kramer and Newman.

The only economic case to be made for the penny is without it businesses would round up their prices and we'd all end up paying more. But that argument is probably overstated, and as the penny continues to lose value, less and less persuasive. You might as well complain that businesses have to round up to the nearest cent because there are no half-cent coins. (Yes, there used to be half-cent coins in the U.S., from 1793 to 1857.)

Add to all that the hidden cost of keeping up with pennies, counting them out, storing them, sorting them, driving them to the nearest Coinstar machine to get rid of them and the time spent wrapping them to take them to the bank, and pennies are surprisingly expensive for something so worthless.

The penny's only remaining value is cultural.

We name daughters Penny. We don't name them Nickel or Dime. It's "a penny for your thoughts," not a quarter because, face it, no one cares that much about what's on anyone's mind. And if you're really poor, you "don't have two pennies to rub together" because not even really poor people will bend over to pick them up.

The only known form of communism to work are the "take a penny, leave a penny" trays you find in convenience stores and restaurants. When they are gone, it'll be the worst day for communism since the fall of the Berlin Wall. It gives new meaning to "red cent."
Posted by Franklin at 12:12 AM No comments:

Since his death in 1981, Fredric Wertham's reputation has taken a significant hit.

In the 1950s, Wertham, a psychiatrist, was a popular author and public figure, quoted in the media and giving testimony before Congress. His 1954 book, "Seduction of the Innocent," was the intellectual ammunition in the moral panic of the day — the crusade against juvenile delinquency. And Wertham placed the blame squarely on comic books.

Today his reputation is mostly that of a ridiculous crank, a puritanical moralist who tried to blame Batman and Robin for male homosexuality, Wonder Woman for lesbianism (and bondage and S&M), and crime and horror comics for every form of juvenile misbehavior imaginable.

As it happens, neither view of Wertham is strictly true. The truth, it seems, is far simpler.

Fredric Wertham was a fraud.

Carol Tilley, a librarian and professor at the University of Illinois at Urbana-Champaign, went through Wertham's papers, which he left to the Library of Congress. In the papers devoted to "Seduction of the Innocent," she found evidence of a very different seduction, evidence she details in an article published in Information and Culture: A Journal of History.

"Lots of people have suspected for years that Wertham fudged his so-called clinical evidence in arguing against comics, but there's been no proof," Tilley said in a university press release this week. "My research is the first definitive indication that he misrepresented and altered children's own words about comics."

"Fudged" is a charitable word. Tilley found Wertham exaggerated claims, omitted critical information and altered his subjects' statements. In one case, that of a 13-year-old boy who sexually abused another boy, Wertham overstates the 13-year-old's interest in Batman and, far worse, leaves out that the 13-year-old was himself sexually abused by another boy. One might think history of sexual abuse would be more relevant than history of reading Detective Comics. Wertham thought otherwise.

The charitable reading of that is Wertham was himself seduced, possibly by the minor celebrity he attained as an anti-comics crusader, but most likely by his grand theory that one could explain juvenile delinquency just by pointing an accusing finger at that crudest and most commercial of pop art forms of the day, the lowly comic book. Nothing seduces an Ivory Tower-dweller quite like a grand theory.

Before Wertham, the moral panic he helped foment and the comics industry's craven self-censorship under the Comics Code Authority, comics were a free for all. Unlike broadcasters, comics publishers weren't regulated by the FCC, and unlike the movie studios they weren't beholden to the Hays Office. After Wertham, the vice tightened and sales plummeted. EC Comics, upstart publisher of still-influential horror titles like Vault of Horror and Tales from the Crypt, got out of comics entirely. The Comics Code, crafted by its more-established rivals, seemed written to put EC out of business.

Science is supposed to be objective. Unfortunately, science is full of scientists, who are merely human and subject to bias, preconception, hubris and, occasionally, even corruption. Another kind of seduction is the temptation to bend facts, omit facts and, yes, "fudge" facts in the service of a supposedly noble cause. And what could be more noble than saving children?

So one moral panic follows another, some promoted by left-leaning intellectuals like Wertham, some by social conservatives, and some by oddball alliances of the two. The targets change. One day it's comics, the next TV, the next rock music, the next Dungeons & Dragons, the next violent movies and now video games. The "science," however, is always suspect.

Wertham's seduction should prompt us to think twice when faced with his successors.
Posted by Franklin at 12:30 AM No comments: 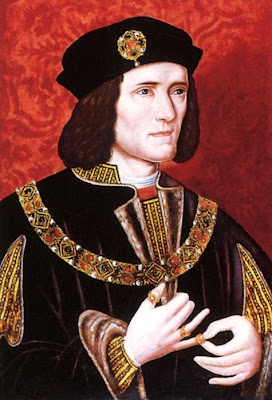 Richard III is finally getting his second act.

The last English king to die on the battlefield, Richard was disinterred last year from his resting place beneath a car park in Leicester, England. (Still no sign of Jimmy Hoffa.) This week, scientists revealed the results of a DNA comparison and proclaimed the 527-year-old remains those of of the last Plantagenet king, killed on Bosworth Field, some 20 miles away, on Aug. 22, 1485.

If his bones could talk, they'd shout, "A hearse! A hearse! My kingdom for a hearse!"

Even his enemies admit his courage. He died fighting and he died badly, sustaining multiple fatal wounds to the skull, along with postmortem injuries for good measure. He played the game of thrones and lost.

The archaeologists who found him haven't said if there was any good interred with his bones, not that one would expect it given his reputation as the most villainous of English monarchs, a Machiavellian schemer who likely — but it is disputed — had his nephews murdered to secure his throne, and who was cursed with a twisted, deformed body matching his dark, twisted soul.

Turns out Richard III did indeed have a twisted spine, likely from scoliosis.

Richard's death ended the War of the Roses, the House of York's dynasty and the entire Medieval period. It ushered in modernity and the Tudors, beginning with the coronation of Henry Tudor as Henry VII. Henry VII begat Henry VIII, who begat Elizabeth I, who reigned over the age of Shakespeare, as those of you who have seen "Shakespeare in Love" no doubt recall.

Judi Dench won an Oscar for her portrayal of Elizabeth I in that film, but I'm partial to Miranda Richardson's daffy and bloodthirsty portrayal of the queen in "Blackadder II." Richardson's capricious Elizabeth is always threatening to chop off people's heads, which is a good summation of what happened to those who offended monarchs back in the day.

So, when it comes to Shakespeare's portrayal of the House of Tudor's old foe, he doesn't spare the cheap seats. Building on other contemporary portrayals of Richard III, Shakespeare's version is a hunchback with a limp and a withered arm, all outward symbols of his villainy. (The recovered skeleton shows no sign of a withered arm.) It is Shakespeare's Richard that has, through intervening centuries, entered the public consciousness and devolved into caricature. (See, for example, the Richard III ward in Monty Python's "Royal Hospital for Overacting" sketch.)

History is a moving target. Even the exact location of the Battle of Bosworth Field wasn't settled until three years ago, when archaeologists put the location a mile southwest of what had been taken as fact for 500 years. Bosworth Field tourists have been getting lost since Columbus got lost.

Shakespeare may have been a Tudor propagandist, but Richard III's remains on their own won't improve the king's image. Mostly, they confirm what history and drama have said, from the hunchback to the brutality of his death. His shallow, forgotten grave hints at just how disliked he was — at least by the Tudors and Lancasters.

Whether he really did in his nephews or whether he was a good and fair administrator, when not vying with his rivals, will remain matters of debate. No amount of forensic detective work, apart from finding the nephews walled up in the Tower of London, will change that.

Without a doubt, Richard III was a nasty piece of work, but so were the Tudors and Lancasters.

For what it's worth, Vlad the Impaler has his revisionist admirers, too.
Posted by Franklin at 12:26 AM No comments: