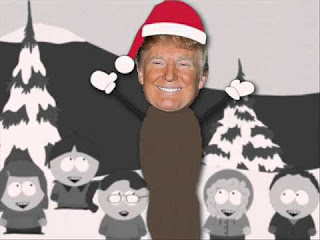 Trumpism is bullshit. That is to say Donald Trump, his bombastic proclamations, his haphazard policy pronouncements, and his supporters are bullshit.

I don’t mean bullshit in the usual sense of a crude insult. Nor do I mean it in the sense of magicians Penn and Teller, who on their Showtime television series referred to frauds and hucksters as peddling “bullshit,” rather than in terms that might lead to lawsuits, no matter how frivolous.

Rather, I mean bullshit in a precise, technical sense.

Ten years ago, Harry G. Frankfurt, professor emeritus of philosophy at Princeton, published a slim little book called On Bullshit. Surprisingly, this philosophical essay became a best-seller. Frankfurt was on to something. He surveyed the landscape and saw bullshit.

The best way to summarize Frankfurt’s analysis is through his distinction between a bullshitter and a plain old everyday liar. They have different relationships with the truth.

A liar knows and cares what the truth is, because the truth is something to avoid. The bullshitter, however, doesn’t care about the truth. He is indifferent to it. For the bullshitter, the truth literally doesn’t matter. Sometimes he may even tell the truth, and that’s fine, too. But most of the time, he doesn’t. When you speak or write without regard to the truth, the odds are against being truthful.

Talk radio, website comment sections, and cable television are fertile ground for bullshitters. But bullshit on Trump’s scale is new to presidential politics. We’re used to politicians who simply lie.

Richard Nixon lied. Bill Clinton lied. George W. Bush either lied or was lied to and passed it on. Hillary Clinton is intimately acquainted with the truth and wants no part of it.

President Barack Obama lies, but sometimes he bullshits. Is “If you like your doctor, you can keep your doctor” really a lie? President Obama would have said whatever he thought people wanted to hear regardless of its truth value. The only important thing was enacting the government program that would be his legacy. Regardless, Obama is not in Trump’s league when it comes to bullshitting. Compared to Trump, Obama is — as he himself might say — junior varsity.

Trump bullshits all the time, no matter the subject. Does he still believe thousands of Muslims in New Jersey cheered the collapse of the Twin Towers on 9/11? Who knows? He said it, and he’s sticking with it. The truth isn’t something to avoid or embrace; it just doesn’t matter.

The same goes for illegal immigration. Trump speaks off the top of his head, calling upon half-remembered headlines and something he may have seen on TV. The details are unimportant because the truth is unimportant. All that matters is Trump says what he says with gusto, that he convinces his supporters he’s the fighter they longed for.

The news media can fact-check Trump and proclaim his pants on fire, but for Trump that’s just another baseless attack. Truth is irrelevant to the bullshitter. Trump gets that, so why can’t those losers at The Associated Press and The Washington Post?

If the polls showing Trump extending his national lead are to be believed, Trump has found a constituency eager for bullshit. He also has found room to operate. If a candidate isn’t beholden to the truth or trapped in a lie, he has true freedom. He becomes the uber-candidate, a candidate beyond mere truth and falsehood. The old rules don’t apply to him.

Trump supporters display the same lack of regard for truth. Olivia Nuzzi of The Daily Beast interviewed Trump donors and found people like “the man who believes Trump has great intellect and his bold pronouncements are just showbiz.” They know Trump is bullshitting, and it’s part of his appeal. It may even be the key to his appeal. If so, it’s the answer to the question pundits and pollsters have asked themselves since Trump entered the race for the Republican presidential nomination in June and immediately claimed front-runner status, which he has yet to relinquish.

Trump is a bullshit candidate with bullshit ideas and bullshit supporters. As those of us not under Trump’s spell have feared, this presidential campaign is going to shit.

Franklin Harris is an editor and writer based in Alabama. His website is franklinharris.com, and he tweets at @FranklinH3000.
Posted by Franklin at 1:25 AM No comments: