Culture Shock 01.26.12: You're better off not running with 'The Devil Inside' 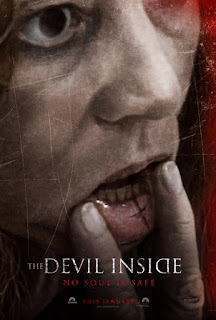 As a movie, "The Devil Inside" is a failure. As a horror movie, it's a scare-free bore. But as a test of the audience's willingness to put up with being jerked around for an hour and a half, "The Devil Inside" is a resounding success.
Never before have I attended a movie after which every single audience member made his displeasure known with some sort of verbal outburst, some of which I cannot repeat here. (Must think of the children.) I'd heard stories of audiences being so angry with "The Devil Inside" they threw popcorn at the screen — which means they were really mad, 'cause theater popcorn ain't cheap. That didn't happen at the screening I attended, which is a shame. That would have been entertaining.
As I recall, my own response at the time was something like, "That wasn't very good, now was it?"
That's an understatement. "The Devil Inside" will make you angry. Any hope I'd had that it would be "so bad it's good" faded in the first 20 minutes. This is a film that combines two overused horror tropes — exorcism and "found footage" — and makes something less than the sum of the parts. There's even a dash of "Da Vinci Code"-style Vatican conspiracy paranoia thrown in for bad measure. I almost feel bad for reviewing this movie. It's like drowning a puppy because it's too dumb not to poop on the rug.
The movie starts in the 1980s, with 911 recordings and police video taken from the scene of a triple homicide. The slaughter, it turns out, was committed by a woman (played by the aptly named Suzan Crowley, in the film's only credible role) who may or may not be possessed by the devil. (Go ahead. Guess.) Flash forward to the present day, and the woman is, for reasons that vaguely make sense only if you assume a vast Vatican conspiracy rules the world, incarcerated in an asylum next door to the Vatican in Rome.
Her now adult daughter Isabella (Fernanda Andrade) is making a documentary about Mom and exorcisms. Assisting her is a filmmaker (Ionut Grama) whose purpose is to hold the camera and be a jerk. (In these movies, the guy holding the camera is always a jerk.) During her quest, Isabella sits in on — and films! — an exorcism class. Turns out, Vatican-authorized exorcisms are really boring, and, as it happens, two rogue priests whom Isabella meets agree. The priests (Simon Quarterman and Evan Helmuth) have been performing unauthorized exorcisms on the side because the church is too busy covering up demonic possession to be of any help. Naturally, the priests decide to tag along for a fateful meeting with Isabella's mom.
After tricking the world's dumbest hospital staff into leaving them alone in an examination room with Isabella's mom, our four heroes confirm their worst suspicion: Mom is possessed not by one demon but by five. If you can add, you can figure out the rest.
That's the problem. There is nothing the least bit surprising about "The Devil Inside." Even the attempted scares are telegraphed well in advance. And the ending manages to be even less satisfying than anything in the "Paranormal Activity" franchise. It's no wonder people want to throw things afterward.
Writer/director William Brent Bell and co-writer Matthew Peterman have reached the rock bottom of the found footage genre. The whole contrived exercise seems like an excuse to take a trip to Rome — and then it rained the entire time.
Maybe they were just taking their disappointment out on the audience.
Posted by Franklin at 1:05 AM No comments: 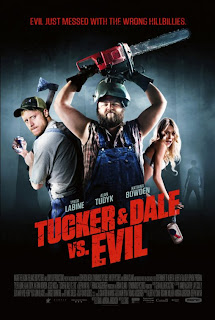 Maybe it's too much to expect two hillbillies to deal with more than one evil at a time.
Posted by Franklin at 3:12 AM No comments: 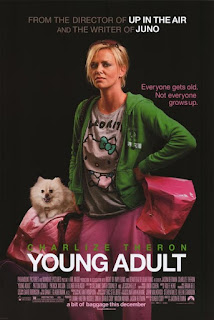 Mavis Gary is no serial killer, but she's undoubtedly Charlize Theron's most despicable character since she won an Oscar for "Monster."
Mavis is narcissistic, selfish and — ultimately — delusional. That's bad for her but great for us. Fortunately, Mavis is the kind of despicable that is fun to watch. Most of the time, anyway.
Directed by Jason Reitman from a script by his "Juno" collaborator Diablo Cody, "Young Adult" is a romantic comedy waiting to happen. All the pieces are there: a woman returning to her rural hometown from the Big City, an old high-school flame, a former classmate/confidant.
We've seen it a thousand times — usually with Reese Witherspoon in the starring role — and Mavis knows the fairy tale cliché only too well.
But "Young Adult" is not a rom-com. Instead, it's a slightly dark and refreshingly pointed reversal of the lazy, insulting rom-com formula.
After graduating high school, Mavis left her "hick" town for a bustling metropolis — in this case, Minneapolis, where she found modest success as a writer of young adult novels. But with her deadline to turn in the series' final volume looming, Mavis has a sort of premature mid-life crisis, set off by an email announcing the birth of her high-school boyfriend's new baby.
By all accounts, Buddy (Patrick Wilson) is happily married to his wife, Beth (Elizabeth Reaser), but that fact and the couple's new bundle of joy are just minor complications for Mavis, who returns to her hometown with her laser sight on winning Buddy back.
All she has to do is look her best — not a problem for someone who looks like Charlize Theron — inflate her resumé and convince Buddy they are meant to be together. It's just like in the movies.
The only person fully aware of Mavis' insane scheme is Matt (Patton Oswalt), a classmate Mavis virtually ignored in school, although it's subtly implied Mavis might be indirectly (and unknowingly) responsible for the brutal hate crime that left him crippled in more ways than one.
Matt is a geek who shares a house with his dorky sister, makes custom action figures and — in an unorthodox twist — distills bourbon in his garage. He tolerates Mavis only because he's had a crush on her since high school.
As he says during a scene where both are indulging their neediness, guys like him always fall for girls like her.
For the rest of us, Mavis is a hard character to like, and yet Theron still manages to make her sympathetic during fleeting moments, conveying hints of fear behind tired, hungover eyes. There's a real person behind Mavis' self-created, cartoon-character exterior, which evokes at times Paris Hilton, complete with a little dog tucked away in a shoulder bag.
"Young Adult" subverts the typical romantic comedy's clichés by always doing the opposite, but it subverts other Hollywood clichés, too. It says: "Most people are pretty happy. Family life can be fulfilling. Life in small-town America isn't all bad." Maybe those things aren't for everyone, but they're valid choices. The quiet suburban desperation of "American Beauty" says more about screenwriters than it does about the suburbs.
Despite centering on a miserable protagonist, "Young Adult" is a strangely optimistic film. In Reitman and Cody's neighborhood, most people are doing OK. When Mavis drives her trendy Mini Cooper through her old stomping grounds, wrinkling her nose at the chain stores and the combination KFC/Taco Bell/Pizza Hut — a Frankenstein restaurant that reeks of tackiness — she's not actually showing off her good taste. She's just being a snob.
Everyone's happy except Mavis and the people like Matt who are unlucky enough to fall for her.
Posted by Franklin at 11:09 AM No comments: