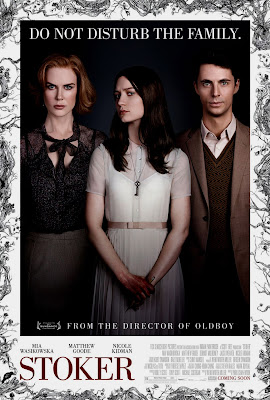 Philosophers and scientists have wondered for millennia about what makes us who we are, whether it is nature or nurture. It's a debate that predates even Darwin and modern biology.

Can the Cockney flower girl Eliza Doolittle become a real lady? Can Moe, Larry and Curly become true gentlemen? Or, like Popeye the Sailor, are we what we are and that's all that we are?

To put a finer point on it: Are monsters born or bred?

That's the head-high thicket into which director Chan-wook Park wanders in "Stoker" (DVD and Blu-ray), one of the year's most daring and disturbing films.

All is not right with India Stoker (Mia Wasikowska). As she says, her father is dead. But that is just the beginning of what troubles her.

Her mother, Evelyn (Nicole Kidman), is self-absorbed and perhaps overly eager to move on following her husband's death.

India is the exact opposite, and we wonder about the nature of her relationship with the father who took her on weekend hunting trips and helped her amass a collection of taxidermied kills.

"He used to say, sometimes you need to do something bad to stop you from doing something worse," India tells us, leaving those of us familiar with "Dexter" in mind of Harry's Code.

While Evelyn longs to get out of the house for shopping trips and ice cream excursions, India is in mourning, draped in Puritan black and reading books about death rituals. You could cut the tension, or perhaps a throat, with a knife.

Then arrives Charles Stoker, or as Evelyn calls him, "Uncle Charlie," her dead husband's brother and the uncle India never knew she had.

Isn't is odd to have an uncle, your dad's brother, whom no one ever bothered to mention? India thinks so, but her face, as always, betrays nothing.

Still, Charles (Matthew Goode of "Watchmen") is eager to help. He cooks. He tends the garden. He spends quality time with Evelyn, who seems only too eager to play Queen Gertrude to Charles' usurping Claudius.

But India is no Hamlet, and what Charles most wants is to take his blossoming niece under his wing.

He wants to be friends, but as India observes, they don't have to be friends when they're family. And family ties are the ties that bind, sometimes with zip ties.

Before long, India and Uncle Charlie are seated together at the piano, and for the first time, India, her fingers dancing on the keys, displays passion.

Where India's tutelage with her father left off, her tutelage with Charles picks up, and the gleam in Uncle Charlie's eye looks like something more than pride.

Coming of age isn't easy for anyone, especially in the movies, but coming of age in the Stoker family presents unique challenges that flirt with breaking the most taboo of taboos.

Park, a South Korean director best known to American audiences for his "Vengeance Trilogy" — "Sympathy for Mr. Vengeance," "Oldboy" and "Lady Vengeance" — delves deep into the aesthetic of "American Gothic" for this tale of a family in decay. The promotional art gives the game away, depicting Kidman and Goode as Grant Wood's unhappy couple, with Wasikowska as the pitchfork in the middle.

Wasikowska (Alice in Tim Burton's "Alice in Wonderland") gives what can best be called an obsessive performance, which combines an eerie lack of empathy with a sense of something burning beneath the surface. It's a performance that captivates and repels, and most of all surprises.

Nothing, least of all India, is what it seems.
Posted by Franklin at 12:00 AM No comments: 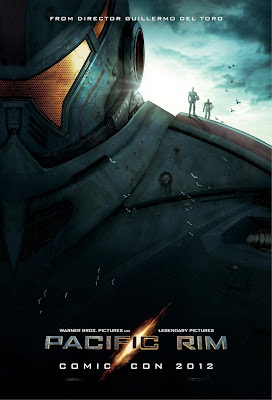 There is nothing more quintessentially Japanese than the idea of giant robots fighting giant monsters. Japanese producers have entertained audiences for five decades by pitting futuristic marvels of human ingenuity against lumbering, primeval and often mindless forces of nature.

Perhaps that is what you get when you have a society that has embraced a kind of neon-soaked, "Blade Runner" aesthetic of the future yet, because of geography and geology, faces the ever-looming threat of primordial devastation from earthquakes and tsunamis.

"Pacific Rim" director Guillermo del Toro ("Pan's Labyrinth") and screenwriter Travis Beacham ("Clash of the Titans") make no apologies for their love of Japanese cartoons (aka, anime) and monster movies. Peer into their film's DNA, and you'll find the genetic markers of everything from Gamera to Voltron.

In the near future, humanity faces extinction when a dimensional rift opens deep beneath the Pacific Ocean, allowing creatures from another world to come through and flatten cities all across the Pacific Rim, from San Francisco to Sydney.

To protect themselves from this seemingly endless parade of monsters, called kaiju, the nations of the Pacific Rim build giant robots, called jaegers, to fight them.

Hey, it's exactly the strategy anyone who grew up on Japanese cartoons would adopt.

The movie's characters are equally drawn from anime mainstays. They include the heroic jaeger pilot (Charlie Hunnam), the hothead (Robert Kazinsky), the quiet but formidable female (Rinko Kikuchi), the gruff and stoic leader who is keeping a secret (Idris Elba) and not one but two mad scientists who double as comic relief (Charlie Day and Burn Gorman).

"Pacific Rim" is a direct descendent of "Neon Genesis Evangelion," the influential 1990s anime series that took all of the "giant robot" cliches and mixed them with a heady dose of Carl Jung and Sigmund Freud. 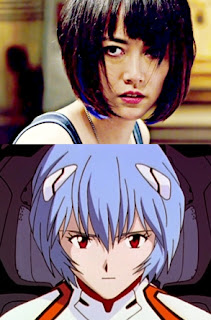 Del Toro and Beacham dial down the Freud. But just about every character still has daddy issues, especially Kikuchi's Mako Mori, who, with her purple-streaked hair and quiet demeanor, is the flesh-and-blood embodiment of "Evangelion" dream girl Rei Ayanami.

Basically "Pacific Rim" is from the template Japanese animators have used for decades, only now translated, by a Mexican director and an American screenwriter, into a colorful, action-packed, live-action thrill ride that's stripped down to the Platonic ideal of the robot vs. monster genre.

While the American-produced "Godzilla" of 1998 hid its monster, the kaiju of "Pacific Rim" are impossible to miss. While Michael Bay's "Transformers" films are an incoherent blur of CGI, the fights of "Pacific Rim" form a brilliantly choreographed ballet of destruction.

In "Pacific Rim," the power of nature is everywhere. Even when kaiju aren't attacking, our heroes' last-stand sanctuary in Hong Kong is besieged by monsoon conditions. But if nature is a constant threat, humanity's official institutions are a constant failure. Shades of Hurricane Katrina.

The world's governments abandon the jaeger program in favor of building a giant wall, which, unsurprisingly, fails to keep out the kaiju. Elba's Stacker Pentecost, however, opts for a more comprehensive solution to the "alien" problem. He turns to underground figures like Hong Kong crime lord Hannibal Chau (Ron Perlman), who can get him anything he needs, for a price.

Unlike other post-9/11 disaster movies that dwell on the visuals of falling buildings and ruined cities, "Pacific Rim," when not caught up in its spectacular metal-on-monster mayhem, focuses on how the human spirit overcomes a crisis, even in the face of that most intractable of monsters — the foolish politician.
Posted by Franklin at 12:00 AM No comments: 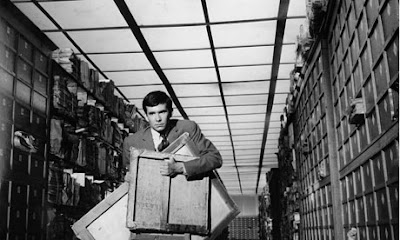 "Someone must have been telling lies about Joseph K., for without having done anything wrong he was arrested one fine morning."

So begins Franz Kafka's absurdist novel of bureaucracy, totalitarianism and paranoia, "The Trial."

Orson Welles directed a 1962 film version starring Anthony Perkins, who once told a revealing story about the direction Welles gave him. As I recall, the story went something like this:

Perkins was having difficulty finding an approach to the role of Joseph K. that Welles liked. So he asked Welles how he should play the part.

"Play him as if he's guilty," Welles said.

That bit of direction makes all the difference. The Joseph K. described by Kafka's omniscient narrator is, we're led to believe, blameless, a victim of "lies." The Joseph K. played by Perkins, on the other hand, is guilty. He's been found out, but no one will tell him the crime he's accused of committing, and it could be anything — or everything.

It shows in Perkins' brilliant and overlooked performance. His Joseph K. is twitchy, nervous and paranoid. Just because you're paranoid doesn't mean they're not out to get you. Nor does it mean you're innocent.

That's the insight Welles brings to the material. There are no innocents; we're all guilty of something. It's no accident that Welles paints his version of "The Trial" in the stark black and white of film noir, a genre he knew well from having made "Touch of Evil" and "The Lady from Shanghai." Everyone in film noir is compromised in some way, and Welles' "The Trial" does Kafka one better.

Welles says we're not only all the potential victims of faceless bureaucrats and politicians, we all have it coming, too.

That isn't to say all crimes are equal. Sometimes all it takes is a small crime, maybe even a crime you didn't know was a crime or that you committed.

In his book "Three Felonies a Day," Boston-based attorney Harvey Silvergate argues that because of the proliferation of complex and vague laws, the average American commits three felonies a day. That's felonies with an F, not merely petty crimes like speeding or jaywalking. That leaves all of us at the mercy and caprice of bureaucrats and prosecutors. So much for the rule of law. In the "Land of the Free," you're free only because no one has thought to lock you up.

So you say to yourself, "That can't be! I haven't committed any crimes. What crimes could I possibly have committed?" 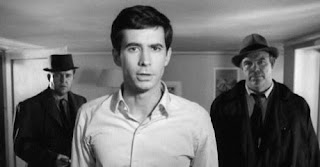 Now you know exactly how Joseph K. feels. Is that a little bit of sweat starting to form on your upper lip, by chance? Is it starting to show? Do you look guilty? You sure look guilty to me.

So does Joseph K., who, under Welles' direction in this neglected and underrated film — I think it's one of his best — becomes a film noir everyman, undone by a deadly combination of the system, femme fatales (Jeanne Moreau, Romy Schneider and Elsa Martinelli) and his own sins, whatever they might be, because they could be anything.

"The Trial" is gorgeously shot by Edmond Richard, who would go on to shoot Luis Buñuel's "That Obscure Object of Desire" and "The Discreet Charm of the Bourgeoisie." Taking advantage of location shooting in Croatia, he and Welles create a surreal, off-kilter environment of such immense scale that it threatens to swallow K. even as he attempts to navigate its shadowy corridors.

The system is bigger than any of us.

Welles' "The Trial" is available on DVD and Netflix instant.
Posted by Franklin at 12:00 AM No comments: