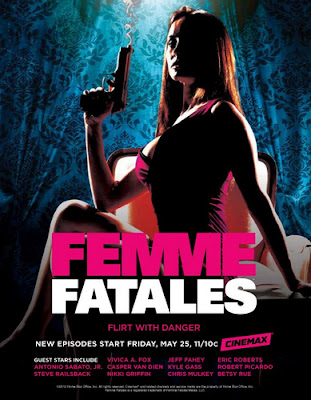 Sex sells, but in a buyer's market, Cinemax is still trying to differentiate itself. But when MTV no longer plays music videos, it's somehow reassuring that Skinemax still tries to live up to its name.
Posted by Franklin at 12:15 AM No comments: 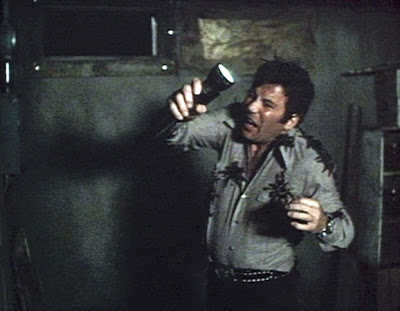 
The first time I saw "Vampyros Lesbos," I fell asleep, which is surprising on two counts.

Franco, a Spanish filmmaker who directed, by some counts, more than 180 films, died early Tuesday. He was 82.

In America, Franco enjoys little name recognition outside the circle of cult cinema aficionados. Unfortunately, one of his worst major films is probably his most widely seen: 1969's "The Castle of Fu Manchu" became fodder for the third season of "Mystery Science Theater 3000."

It's hard to keep up with all the films Franco made because he made so many, often issued under multiple titles, and he directed many of them under pseudonyms. But his better-known films have made him a polarizing figure. Almost no one who has seen Franco's movies is neutral about him. They love him, or they hate him. The closest thing to a middle ground where Franco is concerned comes from those critics who divide his films into two groups: the ones they love and the ones they hate.

And Franco never made it easy. Even his most ardent fans admit he could go a little too far with his mania for zoom shots.

At best, Franco was an uneven filmmaker, but he was almost never boring. Except for "Vampyros Lesbos," but here I'm in the minority; most Franco fans regard it as one of his best films. You definitely have a polarizing filmmaker when even his fans disagree about which are his best and worst films.

Franco burst onto the horror and exploitation scene with "The Awful Dr. Orlof" in 1962. "Orlof" — sometimes spelled "Orloff" — was Franco's answer to Georges Franju's classic "Eyes Without a Face," released two years earlier. Franco would return to the character many times throughout his career, culminating in what was Franco's last good film, 1987's "Faceless" featuring Telly Savalas, Caroline Munro and Brigitte Lahaie.

For a director who seemed bent on erasing the line between art house and schlock, Franco collaborated with a lot of talented performers. He directed Herbert Lom in 1969's "99 Women," the prototype for the women-in-prison genre; elicited the most bizarre, over-the-top performance of Jack Palance's career in "Deadly Sanctuary" (aka "The Marquis de Sade's Justine"); and teamed with Christopher Lee on numerous occasions, including 1970's "Count Dracula," a tedious but unusually faithful adaptation of Bram Stoker's "Dracula."

Franco also may be the only director who claimed to have had no difficulty working with Klaus Kinski, whom Franco cast in "Deadly Sanctuary" (as the Marquis de Sade) and in his surreal thriller "Venus in Furs," which, despite the name, has nothing to do with book.

In one interview, I recall, Franco said he simply shot take after take until Kinski, exhausted, gave the performance Franco wanted. Who knew the trick to dealing with Kinski was so simple?

Most of what I think are Franco's best films are the ones he made with producer Harry Alan Towers. They include "Venus in Furs," "99 Women," and 1970's "Eugenie."

Those three starred Towers' wife, Maria Rohm, but Franco's two muses were Soledad Miranda, star of "Vampyros Lesbos," who died in a car wreck in 1970 when she was just 27, and the woman who would become his longtime companion, Lina Romay, who starred most memorably in 1973's "Female Vampire." They eventually married and stayed together until her death early last year.

For Franco there was no stopping. He kept making movies until the end.

His last film, "Al Pereira vs. the Alligator Ladies," opened in Spain last month.
Posted by Franklin at 12:13 AM No comments: