SPLICE TODAY: Forget Everything You Know About Schooling

My latest for Splice Today involves my epiphany about formal schooling after hearing so many professional educators fret about how much their students are forgetting during the break between when schools stopped classroom instruction because of the COVID-19 pandemic and when schools might reopen in the fall: Formal schooling is largely a waste of time and resources. 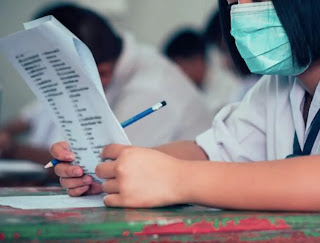 Posted by Franklin at 9:09 AM No comments:

REBELLER: H.P. Lovecraft, The Color Out of Space and the Fear of Everything

In a piece originally written for the late Rebeller, I examine Richard Stanley's H.P. Lovecraft adaptation Color Out of Space and how both Stanley and Lovecraft deal with fear of the outsider:

The irony of H.P. Lovecraft's fiction is not that it works in spite of his well-documented racism; it’s that it works because of it.
While Lovecraft's prejudices against black people and foreigners sometimes enter his works directly (see “The Rats in the Walls” and “The Horror at Red Hook”), they usually manifest in a more generic and universal way: a fear of a mysterious and existentially threatening other. This is what makes Lovecraft's works, especially his later works that formed what became known as the “Cthulhu mythos,” more palatable and more enduring. Fear and loathing of particular groups may be learned and depend on time and place, but fear of “the other” in a general sense is universal, and possibly at least partly instinctual. Like it or not, humans are essentially tribal, and a lot of human progress has depended on broadening our definition of who belongs to the tribe.
The trick today in adapting Lovecraft, especially for the movie screen, is to keep Lovecraft's fear of the other without keeping Lovecraft's particular targets.
Director Richard Stanley (Hardware, Dust Devil) meets the challenge with Color Out of Space, his first narrative feature since his close encounter with 1996's cursed production The Island of Dr. Moreau and its temperamental stars, Val Kilmer and Marlon Brando.
Apart from dispensing with the British “u” of Lovecraft's original spelling, Stanley moves the setting to the present day. He also gives us something Lovecraft never would: an African American narrator played by British actor Elliot Knight as a hydrologist whose work takes him into the wild woods west of Lovecraft's witch-haunted Arkham, Mass.
In interviews, Stanley has said casting Knight is one way of confronting Lovecraft's racism head-on, but it does so unobtrusively. It's simply not a factor in the story, which is playing on a different level. It's a kind of fan service, where those of us in the know about Lovecraft's more unsavory traits can sit back and laugh at the joke Stanley has played on him.
It's ironic, then, that Stanley's Color Out of Space is more in the spirit of Lovecraft than most other Lovecraft-inspired movies, which get by with name-dropping Lovecraftian creations like Cthulhu, Dagon or Yog-Sothoth. (Fear not. Stanley drops a few names, too.) As fun as Stuart Gordon's Lovecraft movies are, for example, only 2001's Dagon and his 2005 Masters of Horror episode “Dreams in the Witch-House” really feel like Lovecraft.
Knight's Ward Phillips is surveying for a new reservoir, which brings him to the Gardner farm where Nathan Gardner (Nicolas Cage) and his family have traded life in the city for the tranquility of raising alpacas in the sticks. Wife Theresa (Joely Richardson) is a stock trader recovering from cancer surgery and connected to her clients by dodgy satellite internet. Daughter Lavinia (Madeleine Arthur) is a practicing Wicca casting spells that fail to transport her back to civilization. Eldest child Benny (Brendan Meyer) spends his days getting high with the neighborhood squatter, Ezra, played by stoner specialist Tommy Chong. And Julian Hilliard of Netflix's The Haunting of Hill House plays youngest sibling Jack.
From the start, this is a family under stress and just one crisis away from full dysfunction. The crisis arrives as a large glowing meteorite that crashes in the Gardners' front yard.
Within days, the meteorite has disappeared, but its unearthly color remains. Indescribable colors, like non-Euclidean geometry, may sound great in print, but they don't translate to the screen. Stanley settles on neon lavender. Anyway, it gets into the soil, into the plants and into the water that the Gardners and their alpacas drink.
From there, the color's malignancy proceeds in true Lovecraftian style, bringing madness, body horror, transformations, and death, all of which provide another chance for Cage, fresh off Mandy from the same producers, to go Full Nicolas Cage. If that's what you're here for, you will not be disappointed.
Stanley and co-screenwriter Scarlett Amaris drop hints of contemporary relevance — glimpses of pollution and climate change we're probably meant to take as akin to the color — but in the end the color is a different threat entirely. As Lovecraft would insist, human activity is trivial compared to the threats posed by a universe indifferent to human existence.
Medical science can fight Theresa's cancer, and Ezra's boondocks shanty can escape the prying eyes of the surveillance state and surveillance capitalism, but both are powerless against the color.
And what a color is it. Everything is beautifully shot by Steve Annis, whose previous work is in music videos. Color Out of Space is a bold standout in a genre that's come to be dominated by low lighting and monochrome.
For Lovecraft, the “colour of space” might have been a stand-in for a flood if immigrants he saw entering every aspect of society and corrupting it, but its power lies in that it could be any invader. Stanley's own spin on the formula is to make the Gardners invaders, too. Unlike the family of Lovecraft's story, Stanley's are transplants just as the color is.
Nathan has a Baby Boomer infatuation with getting away from the rat race, but his way of going about it is to embrace the latest fad, alpaca ranching: Alpacas are “the animal of the future,” he tells his children. Taking over a house that used to belong to his estranged father, Nathan is the only Gardner who wants to be there. The rest would just as soon have stayed in the city, but they're all a disruptive influence in the woods west of Arkham, just like the color is.
Particular fears may change, but the instinct remains.
Franklin Harris is an editor at The Decatur Daily in Decatur, Ala.
Posted by Franklin at 2:51 PM No comments: