The original 1973 version of "The Wicker Man" is a horror classic. The 2006 remake starring Nicolas Cage is an unintentionally hilarious diversion.

Unfortunately, "The Wicker Tree" — director/writer Robin Hardy's completely unnecessary followup to the 1973 film, which he directed from Anthony Shaffer's screenplay — is neither.

It's neither good nor bad enough to be entertaining, and you find yourself wishing the inevitable and unsurprising conclusion would just hurry up and arrive already.

Not quite a sequel and not quite a remake either, "The Wicker Tree" tells basically the same story as "The Wicker Man," only with a much less interesting and far more grating cast of characters.

Speaking of whom, meet Beth and Steve (Brittania Nicol and Henry Garrett). They're a young couple from Texas on a mission trip to bring Jesus and their contemporary Christian musical stylings to the poor lost souls of Scotland. Never mind that, last I heard, Scotland was a mostly Christian land. Nevertheless, as luck would have it, Beth and Steve have the good fortune to find one village where the locals all still worship the "old gods."

And by "good fortune" I mean horribly bad fortune.

Yet the locals seem strangely welcoming of the two Texans, even if they aren't the least bit receptive to their message, happy as these Scots are to remain in their blissful paganism.

Clearly, something sinister is afoot, what with village leader Sir Lachlan Morrison (Graham McTavish) practically twisting his mustache at every turn. But our two young heroes, with their purity rings and pledges of chastity until marriage, are oblivious to it all.

They're dumber than a bag of rocks, and every time Steve grins, you just want to punch him in the face. (And, yes, he wears a cowboy hat everywhere. Even in church.) If you're looking for an unflattering caricature of Texans, Christians or kids who go to contemporary Christian concerts, this is it. Perhaps a better title for the film would have been "The Straw Man."

The pagans don't come out of this any better, especially Sir Lachlan, who turns out to be a cynical manipulator, exploiting his people's beliefs for his own benefit. It's the same one-dimensional religious baddie we've seen in a dozen other films, only this time he's a pagan.

If the message here is that all religion is bad, it would have been far more honest and effective at least to have characters who resemble human beings with genuine human beliefs. In the original "The Wicker Man," you can sympathize with Edward Woodward's upright but woefully naive Sgt. Howie. Beth and Steve, however, invite only ridicule.

And, let's face it, McTavish, in a role originally intended for Sir Christopher Lee (the original film's magnificent Lord Summerisle), is no Christopher Lee. (Who is?) Alas, Sir Christopher is here relegated to a brief and pointless flashback, which serves only to remind us that "The Wicker Tree" might possibly be watchable if Lee were in more of it.

Unfortunately, Lee, who turns 90 on Sunday, injured himself on the set of another movie and had to back out of the starring role.

But really, I'd settle for a deranged Nic Cage, running around in a bear costume, punching women in the face and screaming about bees.

Unlike the 2006 edition of "The Wicker Man," "The Wicker Tree" is sadly lacking in YouTube-friendly moments of absurdity. It just plods along, going exactly where the other two films went before, but taking a far less scenic route to get there.

Fair or not, the comparisons to Christopher Nolan's "The Dark Knight" are inevitable, especially with his forthcoming sequel "The Dark Knight Rises" waiting in the (bat) wings. 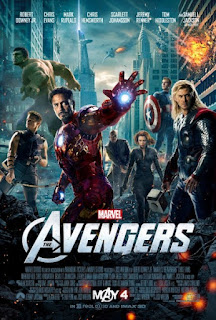 But while Nolan tried to pry Batman free from the genre conventions of superheroics by placing him in a more-or-less realistic setting — not always successfully — Joss Whedon has turned "The Avengers" into the ultimate superhero film, one that embraces its conventions with unapologetic glee.

While "The Dark Knight" is a great film, and obviously a showcase for the late Heath Ledger, it's not necessarily a great Batman film. But "The Avengers" is a great superhero film — one that reminds us why the superhero genre has been so resilient.

Whedon's accomplishment is even more impressive given the logistics involved, taking the pieces of a superhero universe established across five previous films — "Iron Man," "The Incredible Hulk," "Iron Man 2," "Thor" and "Captain America: The First Avenger" — and forging a seamless whole.

The result is much like the Marvel comics on which "The Avengers" is based. It's a fully realized superhero world, where it makes perfect sense for a demigod out of Norse mythology to interact with a man in an American flag costume and an egotistical billionaire with an invincible suit of armor.

The story begins with Thor's power-hungry brother Loki (Tom Hiddleston), who has been cast out of Asgard, forming an alliance with a mysterious alien race to take over the Earth. But to do so, he needs an Asgardian relic called the Tesseract, which can open a portal through which the alien army can invade. The Tesseract, however, was lost centuries earlier, eventually falling into the hands of the Red Skull during World War II before being lost again and recovered by Howard Stark, the father of Tony Stark, aka Iron Man (Robert Downey Jr.). Now it belongs to the global security/spy agency SHIELD, led by Nick Fury (Samuel L. Jackson), which has its own plans for it.

But before SHIELD's plans are complete, Loki steals the Tesseract, forcing Fury to call on an unlikely group of heroes to save the day, if they ever stop fighting amongst themselves.

It's a lot for Whedon to juggle, but almost everyone gets a chance to shine. (Sorry, Hawkeye. Better luck in the sequel.) As usual, Downey's Stark owns every scene he's in, and Ruffalo brings both a warmth and a simmering intensity to Banner. But the real surprise here is Johansson, who gets the meatiest part and makes the most of it, from her hilarious first scene to her emotional showdowns with Loki and the Hulk. Whedon, creator of "Buffy the Vampire Slayer," is known for his strong, butt-kicking heroines, and he delivers again here, while also peppering the script with the snappy dialogue that's become his other calling card.

"The Avengers" also features yet another indispensable supporting performance from Clark Gregg as SHIELD Agent Phil Coulson, who has been a fan favorite since he first appeared in "Iron Man." For this outing, Whedon casts him in the part of the Everyman, who is more than a little starstruck when confronted with his childhood hero, Captain America.

It's Coulson who sums up why movies like "The Avengers," with their old-fashioned battles between good and evil, are still important. When Steve Rogers wonders if his star-spangled Captain America costume isn't too old fashioned, it's Coulson who says the world sometimes needs a little old fashioned.

Maybe now is one of those times.
Posted by Franklin at 12:35 AM No comments:


This is an idea that should work. Take a real-life writer known for his explorations of murder and the macabre, and embroil him in a murder mystery of his own. 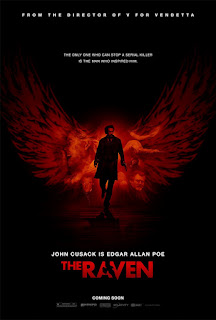 But "The Raven" seems as lost as any maiden whom the angels named Lenore.

John Cusack stars as a man who answers to the name Edgar Allan Poe. While this Poe has the same name as the famous poet and claims to have written that Poe's works, he doesn't really seem a lot like the historical Poe he's meant to be — even allowing that this is an alternate history in which Poe pursues a serial killer.

Perhaps it's because this Poe is also in love, seemingly having put the memory of his dead wife Virginia — inspiration for many of his works — behind him.

Well, it wouldn't be a Hollywood movie without a love story shoehorned into it, would it?

Poe did court other women after his wife's death, but they're omitted here. In this case, the object of Poe's affection is Emily Hamilton (Alice Eve), whose father (Brendan Gleeson), quite naturally has no desire for his daughter to marry a disreputable, drunken and impoverished poet like Poe.

As plot points go, this seems far too familiar.

But why dwell on that when we have a murderer on the loose? And the particulars of his murders seem familiar, too. Intentionally so, leading Detective Fields (Luke Evans) of the Baltimore police to suspect they are all based on Poe's stories.

So, how do you catch a killer whose methods mimic the stories of the city's most notorious writer? You enlist that writer's help, of course.

So, Fields and Poe are on the case, collecting clues even as the morgue collects corpses.

Director James McTeigue ("V for Vendetta") is still trying to shake all of the bad habits he picked up while working for the Wachowskis — including the unwelcome, if brief return of "bullet time" — while the screenplay never delivers the twists and turns needed for a good mystery.

The one unsatisfying twist we do get tries to put a new spin on the historical Poe's final days, which remain the subject of speculation.

So, it falls to the movie's star to carry us through, but Cusack, while likable, has little to work with. His Poe occasionally hints at the moodiness of the genuine article, but just when that seems to be going somewhere, he has to be happy again because he's in love. His mood swings are dictated by what the plot needs at the time. The only time Cusack really seems to be Poe is when he is launching an attack on one of his literary rivals — something the real Poe excelled at.

It's almost a given that movies that take shots at critics are made by people who don't expect to get favorable reviews. Now, I don't take it personally, but "The Raven" isn't especially kind to critics. One of them even ends up beneath Poe's infamous pendulum, and fittingly he's named Griswold, after a real-life Poe rival who did his best to tarnish Poe's reputation after his death.

It's one of the few, fleeting clever bits that only Poe enthusiasts will recognize and appreciate, although I find myself wishing Griswold had been the killer — a Salieri to Poe's Mozart — because there are no feuds quite like literary feuds.

Another clever moment hints at the posthumous rehabilitation of Poe's literary reputation among French critics before American critics finally started to take him seriously.

And what would Poe, no slouch as a critic himself, have made of what's been made of him in "The Raven"?

The real Edgar Allan Poe's life was filled with enough tragedy, drama, heartbreak and rivalries to make a pretty compelling movie. I wish someone had made that movie instead of this one.