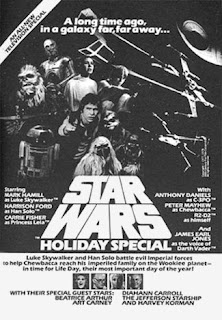 It was around Thanksgiving in 1978 that "The Star Wars Holiday Special" aired for the first and last time.
George Lucas supposedly hates the special so much it remains the only part of the "Star Wars" saga he hasn't marketed, merchandised and re-released multiple times in multiple formats.
And this is a man who still defends Jar Jar Binks.
That tells you two things. One, "The Star Wars Holiday Special" is bad in ways no brief plot synopsis can convey. (I will say Bea Arthur is in it, and she sings a song that is not even close to the worst thing about it.) Two, Lucas didn't have anything to do with it. His name isn't even on it. And it's much easier to disown something you're not responsible for.
Perhaps overcome by their devotion to their ancient religion, some "Star Wars" fans track down bootleg copies of "The Star Wars Holiday Special" — a much easier task now than years ago — and muddle through.
For some, this is a holiday ritual, and, truthfully, it's no more painful than most family gatherings, especially if your family is the Manson family.
Being a "Star Wars" fan is a lot like being in a dysfunctional family.
One day Uncle George gives you a timeless story about a boy, a girl and a universe, then the next thing you know, you're watching Chewbacca's family grunt at each other — without subtitles — for 20 minutes straight. (Again, this is much like human holiday gatherings.) It's one thing for some one-off TV special that Lucas disowns to let you down. It's another thing for the man himself to do so. That's an entirely different level of disappointment.
For an idea of what I mean, see Alexandre O. Philippe's 2010 documentary "The People vs. George Lucas," which recently made its way to DVD and video on demand.
In this case, "the people" is a subset of "Star Wars" fans who think the original trilogy belongs as much to them as it does to Lucas.
Think of them as Occupy Skywalker Ranch, only without the occupy part.
These are fans who have made themselves at home in that galaxy far, far away. The more enthusiastic of them make their own fan films set in the "Star Wars" universe, a practice Lucas even encourages when other copyright holders might unleash their lawyers.
Unfortunately, that sense of "fan ownership" runs into reality whenever Lucas — a tinkerer since boyhood, Philippe tells us — decides to tinker with his trilogy.
Lucas isn't just tinkering with movies. He's tinkering with memories.
Yet this sort of revisionism is common, particularly when it comes to sci-fi. Ridley Scott unveiled his "final cut" of 1982's "Blade Runner" in 2007, while Robert Wise's "director's edition" of 1979's "Star Trek: The Motion Picture" made its debut in 2001.
The difference is Scott and Wise improved on what was originally screened in theaters. If Lucas did that, few would complain. But every time Lucas changes the "Star Wars" trilogy, it's for the worse. We end up with new scenes that serve no purpose, digitally inserted characters who wander aimlessly into the frame and spoil the composition, new dialogue looped into scenes for no good reason, and "improved" special effects that don't mesh with the original.
Like Darth Vader says in "The Empire Strikes Back," "I am altering the deal. Pray I don't alter it any further."
At least I think Vader says that. He did in the original, anyway.
Even as a lifelong "Star Wars" fan, the best I can manage is weary ambivalence. Despite silly, overly entitled notions of fan ownership, "Star Wars" belongs to George Lucas, and he can do whatever he wants with it.
But as a critic — and a fan — I can't ignore where he goes wrong.
Sure, blame others for Bea Arthur. But blame George Lucas for Greedo shooting first.
Posted by Franklin at 12:48 AM No comments:

If you want to make a movie today, you might seek out a location where the tax incentives are enticing (Australia, perhaps) or the production costs almost nonexistent (for example, Bulgaria).
During the 1970s, the place to be if you wanted to make a movie on the cheap and without a lot of pesky safety regulations was the Philippines, and "Machete Maidens Unleashed!" — the new documentary from director Mark Hartley — is a 90-minute crash course in the seat-of-your-pants filmmaking that resulted.
Throughout the decade, producers from the West looked east for a place to shoot inexpensive movies, mostly for drive-ins. Chief among them was B-movie king Roger Corman, who had formed New World Pictures and was instilling his penny-pinching ways in a new generation of directors.
When Corman learned he could make movies in the Philippines less expensively than in the U.S., or just about anywhere else, that was all he needed to know. He dispatched director Jack Hill, and Hill returned with "The Big Doll House."
"The Big Doll House" wasn't the first "women in prison" movie, but it was among the first to push the genre's exploitation elements to their limits. It was a huge success back in the U.S., kick-starting a boom in similar movies, like "Women in Cages" and Hill's camp follow-up, "The Big Bird Cage."
All three — recently released together on DVD and Blu-ray as "The Women in Cages Collection" — feature Hill's greatest discovery, and the only real star to emerge from the Philippine film boom, Pam Grier.
In 1972, Philippine President Ferdinand Marcos declared martial law, but that did nothing to stop producers and directors from setting up shop in his country. They kept making their exploitation movies, and Marcos was just happy for the money. As director John Landis says, these were sometimes movies about overthrowing fascist dictatorships that were being made in a fascist dictatorship.
Or, as another filmmaker puts it, "Human life was cheap. Film was cheap. It was a great place to make a picture." With a few bribes, you could rent the army's helicopters for a day, provided they weren't busy putting down rebels somewhere.
It's an eclectic cast of characters that populates "Machete Maidens Unleashed!" The Philippines was where actors like Christopher Mitchum and Patrick Wayne — sons of Hollywood royalty — could make their own fortune, or not. It was where 2-foot-9 Weng Weng could be the hero in the bizarre spy spoof of questionable taste, "For Your Height Only."
It was mostly schlock and exploitation, although some of it wildly entertaining, Hill's movies in particular. Yet into this stumbled a film with an undeniable pedigree — "Apocalypse Now."
Martin Sheen may have woken up thinking he was in Saigon, but he was really in the Philippines. Where else was Francis Ford Coppola going to get all of those real military helicopters to set to "The Ride of the Valkyries"?
The Philippines was nearly the death of them both.
As with his earlier documentary, "Not Quite Hollywood," Hartley gives us high-octane history. It's not deep, but it is fun, glossy and well-made pop. If "Machete Maidens Unleashed!" doesn't quite equal "Not Quite Hollywood," that's only because, as wild as the Wild East was, the Philippines in the '70s and early '80s still wasn't as insane as Australia during the same period.
Those tax incentives you get in Australia nowadays are just no substitute for driving too fast, setting people on fire and blowing things up in the Outback.
"Machete Maidens Unleashed!" is new on DVD from Dark Sky Films.
Posted by Franklin at 12:35 AM No comments:

Culture Shock 11.03.11: Beavis and Butt-Head bite the channel that feeds them 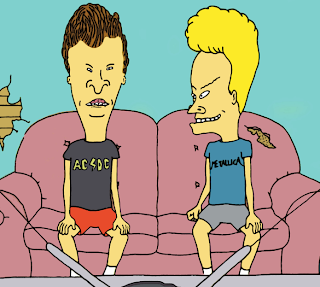 When the first new episode of "Beavis and Butt-Head" aired on MTV last Thursday, nearly 14 years after the show's apparent end, it was as if Beavis and Butt-Head had never gone away.
Like Sherlock Holmes returning from his "death" at the Reichenbach Falls, Beavis and Butt-Head picked up right where they left off.
They're still in high school and still laughing their way through every painful misadventure.
Their comeback seems perfectly timed. Something about this moment seems to be crying out for the deep cultural insights only two oblivious, cartoon teenagers can provide. And the first lesson Beavis and Butt-Head have for us is a simple reminder: The more things change, the more they remain the same.
When Beavis and Butt-Head vanished, it was from a world where the Internet was still new, "reality television" as we now know it was limited to MTV's own "The Real World" and MTV still aired music videos.
Beavis and Butt-Head return to a world of smart phones, smart cards and "Jersey Shore," to which "smart" doesn't apply.
But it's all the same to them. For Beavis and Butt-Head, the world was and is black and white.
There are things that are cool, and there are things that suck. And Beavis and Butt-Head know the difference.
In the 1990s, they told us Michael Bolton and Vanilla Ice sucked. Now, from the comfort of their battered sofa, they can confirm all of our darkest suspicions about "Jersey Shore" and "Teen Mom."
They may not have a large vocabulary, yet Beavis and Butt-Head have their place of distinction alongside other criticism-dispensing duos, like Statler & Waldorf and Siskel & Ebert's thumbs.
As before, Beavis and Butt-Head are idiots. In the season opener, they decide to become werewolves or vampires — it doesn't matter which — in order to attract women, because, as you know, women are all into that "Twilight" stuff. So, they get a homeless man, whom they mistake for a werewolf, to bite them.
Unfortunately, all that gets them is a litany of diseases that would intimidate even Greg House.
Yet when they watch television and talk back to it, Beavis and Butt-Head are almost geniuses, identifying and ridiculing stupidity wherever they find it.
Does TV make Beavis and Butt-Head smarter? Or is TV just so dumb now that they seem smart by comparison? What are we supposed to take away from Beavis and Butt-Head's half-baked couch-potato wisdom?
During his 14-year hiatus from "Beavis and Butt-Head," series creator Mike Judge turned to the Middle American pragmatism of "King of the Hill" and conceived the sci-fi comedy "Idiocracy," about a future that values anti-intellectualism and celebrity above all else.
When Beavis and Butt-Head talk back to their TV, it's impossible not to think of them as Judge's voice, and not just because he provides the literal voices for both.
There's a weird circularity to that. In the '90s, critics cited MTV in general and "Beavis and Butt-Head" in particular as prima facie evidence of Western civilization's decline and imminent demise.
Those were scary times. MTV had to forbid Beavis from saying "fire" on the off chance of his inspiring a generation of arsonists.
Today you again hear pretty much the same complaints about MTV in general and "Jersey Shore" in particular. And Beavis and Butt-Head have joined the chorus in passing judgment.
As far as Beavis and Butt-Head are concerned, the future of "Idiocracy" is the present of television, which has made Snooki and The Situation household nicknames.
It's too bad Beavis and Butt-Head aren't smart enough to get the joke.
I'm sure they'd laugh.
Posted by Franklin at 12:00 AM No comments: