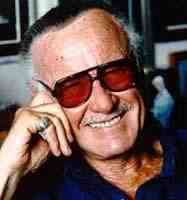 PR.com interviews (if you can consider public relations an "interview") Stan Lee about his life, art, and future business ventures:

PR.com: And now with POW! Entertainment, you have 40 original projects that are currently in development?

Stan Lee: Well I haven't counted them but I think that's a good guess. Yeah, we have any number of things that are in some process or some stage of development or production.

PR.com: And this has nothing to do with comics, they're being produced strictly for television and for film?

Stan Lee: That's right. Television, films, DVD's, telephone-mobisodes (mini episodic television for mobile phones). Some of them may end up also being comic books. Very often a movie producer will say, "Can we do a comic book to promote this prospective movie?" or something like that. And certainly there's no reason not to do comics, but basically we're a film and animation company.