It's not easy being green 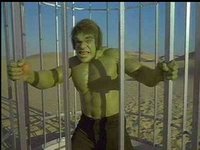 Former TV Hulk Lou Ferrigno is suing his brother over using the family name for a fitness equipment store in Stewartsville, N.J.:

It is in part the store's liberal use of green --— the color of the Incredible Hulk's skin -- that has the former world champion bodybuilder and television star seeing red.

In addition to monetary compensation, Lou Ferrigno asks the court to bar his brother from using the name ''Ferrigno Fitness'' or from using the ''confusingly similar'' splashes of green inside and outside the store.