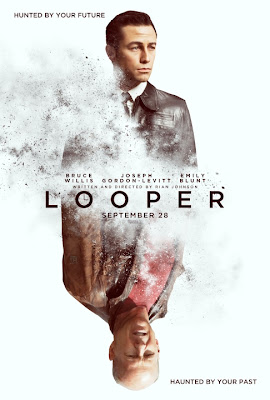 Trying to wrap your head around time travel can give you a headache.

If you're Marty McFly, you have Doc Brown to explain it to you. If you're Bruce Willis' character in "Looper," you down handfuls of aspirin because time travel literally gives you a headache.

One must forgive any time travel movie its occasional plot holes or lapses in logic. The thing about time travel, by its very nature, is it creates plot holes. In the language of the genre, they're called "temporal anomalies." If you've seen any "Star Trek" after the original series, you've likely heard of them. But good filmmakers are clever enough to disguise them or make them part of the story or at least divert your attention from them.

With "Looper," writer/director Rian Johnson ("Brick") tries a little of all three and delivers one of the smartest, most entertaining science-fiction films in years — and one of the best films of the past year. Add another to the list of Oscar snubs.

"Looper" (Blu-ray and DVD) is set in the near future, around 2044. A few decades later, in 2074, our narrator tells us, time travel will be invented — and immediately outlawed. This works about as well outlawing liquor in the 1920s or marijuana today. When the mob wants to off someone, it sends them back in time to the 2040s, where paid assassins await the easy, untraceable kill.

The ubiquitous Joseph Gordon-Levitt ("The Dark Knight Rises") plays Joe, one of the mob's hired guns in 2044. These hired guns are called "loopers" because when the mob of the future decides to cancel their contracts, it sends the loopers' older counterparts back in time to be killed by their younger selves, completing the loop and leaving no loose ends. In return, the younger version earns a windfall retirement package.

That may seem like a bad deal, but as Joe says, the job doesn't exactly attract forward-thinking people. It attracts reckless young punks who doubt they'll even live another 30 years.

So, Joe lives the good life, while he can, bumping off people from the future and stockpiling silver until he suddenly finds his future self (Willis) on the other end of the gun.

And Old Joe does the unthinkable. He escapes.

The bigger mystery comes into play when Young Joe, on the run, hides out with a young mother (Emily Blunt) and her brilliant but unsettling son, Cid (Pierce Gagnon).

Johnson pulls a few fast ones on us. First, he violates H.G. Wells' rule of science fiction: Change one thing and see what follows from it. Johnson changes two things. He introduces time travel, but he also posits humans who develop low-level telekinetic powers — an idea worth its own movie. It seems like a throwaway plot point at first, but it ends up being crucial.

Second, he covers up his biggest time-travel plot hole with a cinematic sleight of hand. If Old Joe escapes in 2044, how does Young Joe live out his life normally so he can he sent back in 2074? Johnson dodges the question by shifting the perspective. It goes from Young Joe to Old Joe remembering his days as Young Joe. It's a bit of a cheat, but all time travel stories are, and Johnson carries off his bait-and-switch so deftly you'd have to be a real curmudgeon to complain.

On the surface, "Looper" is a time-travel movie, but it's really about how we view the passage of time. Are we in it only for the short run? Can we sacrifice in the now for the sake of the future?

These are the sort of questions we ask ourselves all the time. We just don't have the future literally staring us in the face.