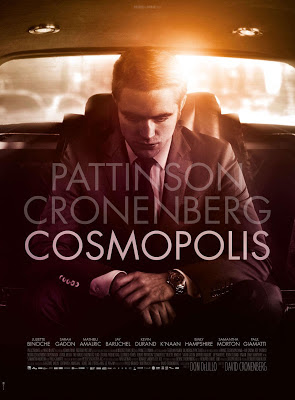 Packer has made a gazillion dollars doing something — what, exactly, I'm not sure — and now heads a company run by T-shirted computer geniuses and senior executives who double as philosophers.

I suspect Packer, a man bored by everything, is supposed to be bland. But it's difficult to say where Packer's characterization stops and Pattinson's own lack of screen presence starts. Plotwise, the entire movie involves Packer riding in a stretch limo from one side of Manhattan to the other to get a haircut. Seriously, that's the plot, but it is complicated by a presidential visit that has traffic backed up all across town, vast throngs of protesters clogging the street in opposition to capitalism or globalization or the bogeyman du jour, and a "credible threat" against Packer's life.

From his backseat, Packer holds forth while getting a prostate exam, which, given the "Twilight" movies, is not the most awkward thing Pattinson has ever done onscreen.

The consensus before director David Cronenberg ("A Dangerous Method") came along to direct this adaptation of Don DeLillo's 2003 novel was that the novel was unfilmmable.

Cronenberg has proven the consensus correct. "Cosmopolis" (DVD and Blu-ray) isn't so much a film as it is a Socratic dialogue in which a buzzword-infected, TED-talk version of what left-leaning intellectuals think capitalism is collides with DeLillo's existentialist meanderings about the world's meaning or lack thereof.

DeLillo is a writer who sees himself challenging the Establishment, yet he is entirely a creature of the Literary Establishment and speaks its language fluently.

If you can't understand what the characters in "Cosmopolis" are talking about, you'll be baffled and probably irritated. If you can, either you'll nod your head knowingly at their alleged profundities, or you'll yell at the screen in a futile attempt to tell the film just how stupid it is. (I yelled. A lot.)

"Cosmopolis" is a critique of what some leftists like to call "late capitalism," the idea that we're living in capitalism's last days and something new is just around the next corner. But we're stuck in traffic, remember?

In his limo, which Cronenberg's camera treats with an antiseptic fetishism, Packer sits in the eye of a financial storm. All around him, there are protests, assassinations and the "creative destruction" of the market. Turning the Marxist slogan on its head, protesters holding dead rats shout, "There is a specter haunting the world!" Only now capitalism rather than communism is the specter, and it haunts Packer, too. He has bet against the Chinese yuan and is rapidly losing his and his company's net worth. (In the novel, it was the Japanese yen, but the focus of the West's "yellow peril" worries has since shifted.)

Yet Packer doesn't care. It's the most exciting thing that has happened to him in ages.

It's the elitist critique of capitalist society — capitalism leads to consumerism leads to nihilism — told by people who haven't bothered to acknowledge the worldwide improvement in living standards over the last several decades.

There is a brief moment early in the film, as Packer is having sex with a character played by the always luminous Juliette Binoche, when it looks like this might not be such a bad trip. Alas, Binoche soon disappears, never to appear again, just like the rest of Packer's disposable traveling companions.

Everything comes back to Packer trapped in his car, with a security guard watching over him, a prisoner of his own success.

At least the whole thing is beautifully shot by cinematographer Peter Suschitzky, who has worked with Cronenberg before, including "Crash." If nothing else, Cronenberg and Suschitzky know how to shoot a car. They could make awesome car commercials together.