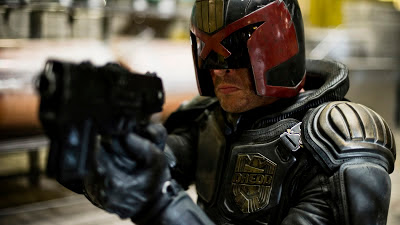 In the near future, Mega-City One stretches across the Eastern Seaboard. Within its concrete and steel canyons, hundreds of millions of people live, walled off from the war-ravaged wastelands to the west. Outside is desolation. Inside is a vast, crowded, chaotic city-state beset by warring gangs.

The only thing keeping law and order are the judges. Each one is judge, jury and, if the punishment fits the crime, executioner. They are the law. And the most feared judge of all is Judge Dredd.

"Dredd" is the second attempt to bring the long-running British comic-book character to the screen. The first, 1995's "Judge Dredd" starring Sylvester Stallone, set new standards for bad decisions and bad acting. The new "Dredd" (Blu-ray and DVD) is at least respectful of its source material, but it never embraces the comic's black humor and subversive critique of authority. It has less ambitious goals in mind.

Take "The Rookie" starring Clint Eastwood and Charlie Sheen, cross it with the first "Die Hard," set it in the future, and you pretty much have "Dredd."

After taking down a van full of gang members high on a new drug called "slo-mo," which makes time appear to move in slow motion, Dredd (Karl Urban of the rebooted "Star Trek") is assigned to give a final pass/fail field test to a trainee judge, Anderson, played by Olivia Thirlby of "Juno."

Anderson is a borderline case who shouldn't even have made it to the field-test stage, but she has a quality that makes giving her a final shot worthwhile: She is a mutant with psychic abilities, the result of her having grown up near the wall separating Mega-City One from the radioactive wastes.

But because this is a movie, it's not going to be a typical training exercise.

Investigating a triple-homicide call leads to Dredd and Anderson becoming trapped in Peach Trees, a 200-story skyscraper slum ruled by Ma-Ma (Lena Headey of "Game of Thrones"), a former prostitute who has built a criminal empire, including control of Mega-City One's slo-mo trade.

With limited ammunition and no backup, Dredd and Anderson must blast their way up and out of Ma-Ma's locked-down fortress, with her army on their heels and hundreds of civilians in the crossfire.

Headey is very good in her stereotypically male role as the ruthless, disfigured villain, and Thirlby gets the movie's best set piece when she goes inside the mind of Ma-Ma's top lieutenant. But most of the credit goes to Urban, who stays true to his character by never removing his helmet, even though it means he can act only with his chin. Urban's enigmatic Dredd, keeping his thoughts and expressions to himself, is a marked improvement on Stallone's screaming buffoon.

Director Pete Travis and his team, with a relatively modest budget, deliver a convincing post-apocalyptic setting and a few first-rate action scenes. In the end, "Dredd" is a perfectly competent and enjoyable action film.

The only problem is it could have been much more, and at no extra cost.

Since its inception in 1977, the "Judge Dredd" comic, appearing in the British magazine 2000 A.D., has been filled with political and social satire. It has attracted some of the British comics industry's top talent, and it helped inspire the politically aware comic books that took America by storm in the 1980s, from Alan Moore and Dave Gibbons' "Watchmen" and Howard Chaykin's "American Flagg" to Mike Baron and Steve Rude's "Nexus" and Frank Miller's "The Dark Knight Returns." But you'd never get that impression from the movie "Dredd," which plays the absurd, madcap universe Dredd inhabits almost totally straight.

"Judge Dredd" co-creator Carlos Ezquerra says that when he created Dredd's costume, with its hints of fascist iconography, he intended it to be futuristic, but now some police actually dress the same way.

So, maybe "Dredd" the movie doesn't bother with satire because it's beside the point?