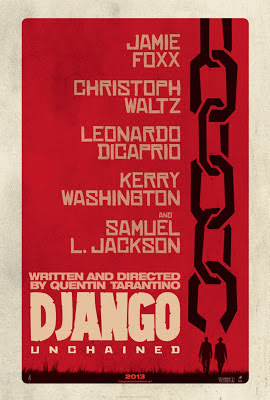 There is a pivotal scene in "Django Unchained" in which Dr. King Schultz, the charming, dapper German bounty hunter played by Christoph Waltz, explains the ways of bounty hunting to the title character.

Yet as callous and cold-blooded as it may seem to gun down a man in front of his child — even when the man is a murderer who has it coming — it still pales compared to the random, everyday brutality of slavery in the plantation South before the Civil War. When confronted with that, it's Dr. Schultz who is a little "green around the gills," and Django (Jamie Foxx) who remains detached and focused on his mission. Besides, it's nothing the ex-slave hasn't seen — and lived — before.

In his followup to 2009's "Inglourious Basterds," Quentin Tarantino again uses the formula of an old-fashioned revenge movie to address one of humanity's darkest periods. And again he shows that while his skill and ingenuity as a director and screenwriter may transcend the talents of most filmmakers who populated drive-ins with exploitation fare in the 1970s, he remains fluent in their language, including their ability to cloak social commentary in blood and bullets.

But just so there's no mistake, Tarantino opens with retro-style opening titles and the theme song to the original "Django," the 1966 spaghetti Western directed by Sergio Corbucci and starring Franco Nero, who shows up here for a cameo.

"Django Unchained" is a rousing exploitation film through and through. And I mean that as a compliment. Dress it up or deconstruct it however you like, it's a blaxploitation Western, like the ones the seemingly immortal Fred Williamson starred in 40 years ago, only far more ambitious. Much like Williamson's characters, Django scandalizes Southern whites by doing such things as riding a horse. But that's only the beginning, and like "Inglourious Basterds," it can only end in fire.

When he has a contemporary setting, Tarantino litters his scripts with pop-culture references. With a story set two years before the Civil War, he relies on mythology. Django's wife (Kerry Washington) is improbably named Broomhilda, a corruption of Brunhilde from Germanic legend.

Like the hero Siegfried, Django will have to walk through fire to save her. At least Django doesn't have to face a dragon, merely a snake in the form of reptilian plantation owner Calvin Candie (Leonardo DiCaprio), a smooth-talking fraud who subjects his strongest slaves to blood sport and likes to be referred to as "monsieur" but can't speak French.

The bigger threat, however, is Candie's house slave and confidant Stephen, played as a literal Uncle Tom by Samuel L. Jackson, who reminds us what a great actor he is when he's not just playing himself with an eye patch or a lightsaber. Jackson's Stephen is as complex as he is despicable, and Jackson doesn't hold back.

Surrounded by flamboyant performances by DiCaprio, Jackson and especially Waltz, who again steals the movie just like he did with his Oscar-winning turn in "Inglourious Basterds," Foxx has a hard time standing out. Yet over the film's nearly three-hour running time, his Django evolves from skittish slave to bewildered freeman to confident avenger, each convincing and all accompanied by simmering rage that subsides only with thoughts of his wife. It's not flashy, but it's the hardest role to pull off.

Tarantino, meanwhile, is trying to top himself. "Pulp Fiction" is still his masterpiece, and the "Kill Bill" films are still the ones that deliver the most pop-art enjoyment, but with "Django Unchained," Tarantino splits the difference between the extremes. That may make it the most Tarantino of all of Tarantino's films.

This could be the one he's remembered for.
Posted by Franklin at 12:29 AM