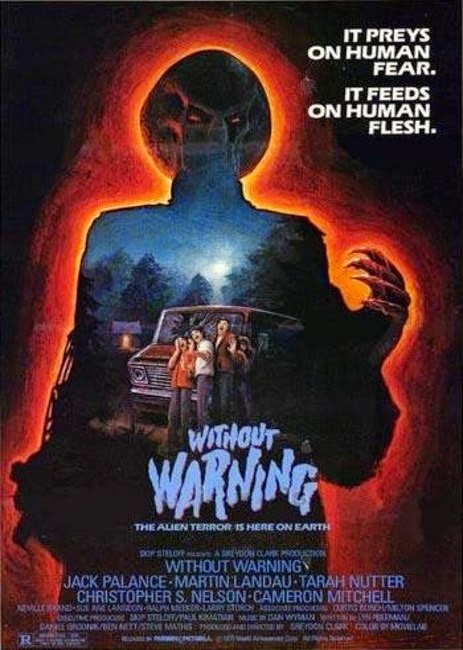 Released the same year that "Friday the 13th" kicked the slasher genre into high gear, "Without Warning" wastes no time putting a different spin on the soon-to-be-cliched formula of teenagers venturing into the woods where an unstoppable killer awaits to pick them off one by one.

This time, the killer is not of this Earth.

Greydon Clark directs this pre-"Predator" sci-fi movie about an eggplant-headed alien who comes to Earth to hunt "the most dangerous game." Only instead of Arnold Schwarzenegger, Jesse Ventura and Carl Weathers, the alien targets Palance, Landau and a young David Caruso (in his first role, unless you count an uncredited bellboy in an episode of "Ryan's Hope," and who does?).

Cult movie label Shout! Factory brings this 1980 drive-in classic to home video with a shiny Blu-ray/DVD combo set that includes interviews with the crew and an audio commentary with the director.

The movie starts with two young couples (including Caruso) heading to the woods for a day of fun and relaxation, probably because it's 1980 and YouTube cat videos haven't been invented yet.

Surprisingly, they think this whole going-to-the-woods thing is a good idea despite the scary warning they get from the creepy taxidermy enthusiast who runs the gas station (Palance) and the foreboding graffiti scrawled on the station's restroom walls.

Technically, that makes the movie's title a lie. Clearly there is a warning. Just because you ignore the warning doesn't mean there isn't one. That's just logic, plain and simple.

Anyway, by the time our young victims get to the crystal-clear lake in the middle of the woods, our extraterrestrial Elmer Fudd has already declared hunting season on Golden Age TV actors.

Maybe Clark has a fetish for typecasting actors based on their most famous roles.

Ralph Meeker, who portrayed Mike Hammer in Robert Aldrich's brilliant 1955 film noir "Kiss Me Deadly," has a small role as a bar patron.

Classic television informs more than just Clark's casting choices. The alien (Kevin Hall), looks like he just walked in from the set of "The Outer Limits." And speaking of typecasting, Hall went on to portray the extraterrestrial big game hunters in "Predator" and "Predator 2."

The alien's preferred method of attack it to throw small, star-shaped aliens — blood-sucking little critters that vaguely resemble the face-huggers from "Alien" — at his intended victims. This makes for some pretty cool and squishy kill scenes.

But the real stars of the show are Landau and Palance. Both still more than a decade away from their Oscar triumphs, these old pros can chew scenery with the best of them, and they do.

Landau plays a Vietnam vet who came back from the war a little funny in the head. He's been convinced aliens are invading for years, so when they actually are, no one believes him. Not that they would have believed him anyway, what with him being funny in the head.

Meanwhile, Palance's trophy-hunter character naturally is the first to realize what the alien's game is and think up a way to fight back. Palance delivers the gasping, wheezing, snarling performance that always made him a terrifying bad guy and, on rare occasions, an even more terrifying hero.

Clark helmed two movies that ended up targets of a good-natured "Mystery Science Theater 3000" ribbing: "Angels Revenge" (aka "Angels' Brigade") and the Joe Don Baker vehicle "Final Justice." But "Without Warning" — like some other Clark movies, such as "Satan's Cheerleaders" and the arcade-culture sex comedy "Joysticks" — is plenty of fun without anyone talking over it.
Posted by Franklin at 12:00 AM