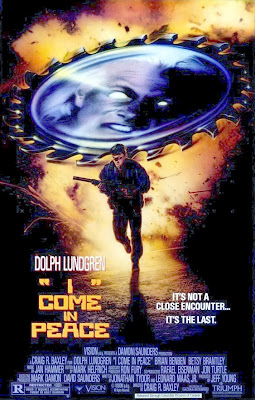 "I Come in Peace," also known as "Dark Angel," is far more entertaining than it has a right to be.

It's a star vehicle for Dolph Lundgren, but this 1990 action flick is probably best remembered for its trailer. It features the film's bad guy, a 7-foot extraterrestrial with a raspy voice, milky-white eyes and long white hair, slashing people left and right while repeating his ironic catchphrase, "I come in peace." To which Lundgren quips, "And you go in pieces."

It's a simple idea, coming at the tail end of the 1980s action movie cycle: "Lethal Weapon" meets "Predator." Mismatched cops must come to terms with each other while tracking down the bad guy, who in this case just happens to be an unstoppable drug dealer from outer space.

The sci-fi twist keeps this from being a generic buddy-cop movie, and with the talent behind the camera, it's more than enough to keep things interesting. "I Come in Peace" is fun and surprisingly well made, with action scenes and cinematography well served by Shout! Factory's new Blu-ray release, issued under the film's boring alternate title, "Dark Angel."

Lundgren ("Rocky IV") is Houston police Detective Jack Caine, a loose-cannon cop who goes with his gut and delivers a mean roundhouse kick. After a drug bust goes wrong, leaving his partner dead and a briefcase full of heroin missing, Caine partners with FBI Special Agent Smith, portrayed by Brian Benben ("Private Practice"). Smith is officious, irritating and strictly by-the-book. So we all know how this is going to play out: The odd couple will eventually become best buddies.

Their quarry is an alien — "not from Mexico" — played by 6-foot-5 German track-and-field athlete Matthias Hues. As the "Bad Alien" — there's also a Good Alien pursuing him — Hues attacks drug dealers and steals their heroin, which he injects into random victims, who then produce a mother load of endorphins, which the Bad Alien extracts, with fatal consequences.

Where the Bad Alien hails from, endorphins are the drug of choice.

By 1990, the drug war was just about played out as far as the movies and TV were concerned. "Miami Vice" had been canceled, "Just Say No" was a punchline, and not even James Bond could make the drug war interesting. Drug pushers from space was about the only card yet to be played.

It turns out to be an ace in the hole. Hues' Bad Alien steals the show, mercilessly killing drug dealers with what is essentially a razor-sharp compact disc, which flies around like a heat-seeking missile. Sure, it sounds silly, but it looks cool onscreen, with a camera's eye view following the spinning disc on its murderous flight.

The Bad Alien is usually one step ahead of the Good Alien (Jay Bilas) and two steps ahead of Caine and Smith. But when they do cross paths, mayhem and explosions ensue.

Director Craig R. Baxley knows a thing or two about mayhem and explosions, having served as stunt coordinator on "Predator" and TV's "The A-Team," and the showdown between the Bad Alien and the Good Alien in a parking garage is one of the film's highlights. The scene requires Hues to hurdle over one car after another as each blows up behind him — no stunt double and no CGI.

These are real stunts, with real explosions going off just a few yards away from the actors, and cinematographer Mark Irwin (David Cronenberg's "The Fly") captures it beautifully. I'm sure actors today appreciate green screens and CGI, but explosions put together in a computer are still no substitute for the real thing captured live in camera.

Shout! Factory's "Dark Angel" Blu-ray ($19.97) includes a trailer and a documentary featurette with Lundgren, Benben and Baxley. "I Come in Peace" is even more impressive when you know Baxley had a budget of less than $7 million to work with. Michael Bay can't blow up a go-cart for that little money.