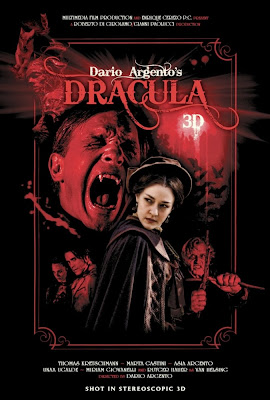 As soon as the falsetto warble of a theremin wafts into the opening titles, "Dracula" begins to feel more like an Edward D. Wood movie than an Argento movie. Is this how far Italy's reigning maestro of the macabre has fallen?

But I exaggerate. It's not really as bad as that. Unfortunately it's not as good as that, either. An Ed Wood film can be so bad it's good. Argento's "Dracula," playing on demand and in limited 3-D theatrical release, is merely bad in the uninteresting way.

Like fellow horror auteur John Carpenter, Argento is a filmmaker who has lost his moorings. His filmography, built on early masterpieces such as "Deep Red," "Suspiria" and "Tenebre," is now more misses than hits. Nowadays when he makes a good film, it is by accident. "Mother of Tears" (2007) works only because it is so ridiculously excessive it plays like a middle finger aimed at critics who thought Argento's previous films were excessive, a kind of "you haven't seen anything yet."

Argento's "Dracula" doesn't have that going for it, and period costume dramas have never been his strength. Before "Dracula," he had directed one period piece, 1998's "The Phantom of the Opera," and even his staunchest defenders throw up their hands at that one.

As "Dracula" opens, Argento and cinematographer Luciano Tovoli ("Suspiria") tease us with visual reminders of Argento's earlier films, but what Argento really seems to be going for is the look of Hammer's "Dracula" films starring Christopher Lee. It's more than coincidental that Argento's version of Jonathan Harker, like the one in Hammer's "Horror of Dracula," is a librarian rather than a solicitor.

Yet Hammer's Dracula isn't the only one to which Argento turns for ideas. Dracula, played by Thomas Kretschmann, looks like Jack Palance in Dan Curtis' 1972 TV movie "Dracula," and the film's final act takes a romantic turn borrowed from Francis Ford Coppola's "Dracula," although without bothering to set up the twist properly.

Argento is counting on our having seen these earlier movies so that we'll accept Kretschmann's dour, unlikable Dracula as a romantic antihero and won't think twice about the sudden revelation that Mina Harker (Marta Gastini) is the reincarnation of Dracula's long lost love.

As portrayed by Kretschmann, Dracula is so stiff and uncharismatic you'd think he's still in rigor mortis. He doesn't seem capable of mesmerizing anyone. Ironically, Kretschmann is cast as Dracula's nemesis, Van Helsing, in NBC's upcoming "Dracula" TV series. Here, however, Van Helsing shows up in the tired form of Rutger Hauer ("Blade Runner"), who knows he's on a sinking ship and seems resigned to go down with it.

Argento's daughter, Asia Argento ("The Last Mistress"), is wasted in the thankless role of Lucy, and would have been better suited for the meatier (pun intended) role of Tania, the peasant girl Dracula turns during the film's opening.

The most unfortunate performance is Unax Ugalde as Jonathan Harker, who will leave you wistful for Keanu Reeves. Only Gastini, who looks eerily like a young Meg Tilly, escapes with her dignity intact.

Lazy scripting and questionable casting aside, where "Dario Argento's Dracula" really falls flat is with its cheap, cartoonish CGI effects, which include the least convincing wolf since Lon Chaney Jr. and CGI blood where practical effects would do just fine.

Still, maybe Argento's "Dracula" is worth seeing for one thing: just so you can say you saw a movie in which Dracula transforms into a giant, CGI praying mantis.