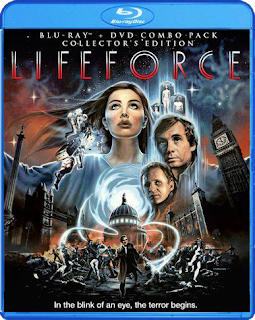 How to describe "Lifeforce"?

For years, when anyone asked, I summed up Tobe Hooper's 1985 science fiction/horror film as a "Doctor Who" story where the Doctor never shows up to set things right. That summation is especially true if you have in mind early-1970s "Doctor Who," with Jon Pertwee's Doctor stranded on 20th century Earth and a full-time supporting cast of UNIT soldiers and scientists.

"Lifeforce" has all the same trappings, only, as I said, minus the Doctor: an English setting, an extinction-level menace from outer space, and principals who include a guilt-ridden astronaut, an eccentric scientist who specializes in the study of death and a no-nonsense Special Air Service officer.

Then there is the other, more blunt way "Lifeforce" may be summarized: It's the movie with the naked space vampire.

I'm not entirely sure "Lifeforce" is a good movie, but it never fails to entertain, which is the only measure that really counts, and say what you will about it, "Lifeforce" isn't a movie that does anything halfway. That is why it has earned a small but devoted following, and why Shout! Factory has given it a stunning combo Blu-ray/DVD re-release.

The film opens in 1986 with a joint U.S./British mission to Halley's Comet that unexpectedly encounters an alien spacecraft hiding in the comet's tail. Before you can say, "I don't think this is such a great idea," the astronauts, led by Col. Carlsen (Steve Railsback, aka Charles Manson in the 1976 TV movie "Helter Skelter"), are exploring the alien ship, where they find and retrieve three apparently human bodies.

The alien humanoids make it to Earth, but most of the astronauts don't, and before long, one of the aliens — the aforementioned naked space girl, played by French actress and dancer Mathilda May — is on the loose and racking up a body count as she feeds on the life force of unwary humans, who easily fall under her vampiric sway.

They don't make movies quite like this anymore, and it's amazing "Lifeforce" was made in the first place, but no one ever accused producers Menahem Golan and Yoram Globus of subtlety.

On the space girl's trail are Carlsen, the mission's lone survivor, and SAS Col. Caine, portrayed with scene-stealing intensity by Peter Firth ("MI-5," "Equus"), who track her across Britain while "thanatology" expert Dr. Hans Fallada (Frank Finlay) tries to discover her weakness.

Fallada shares a name with the real-life author of "Every Man Dies Alone." Take that for what you will.

"Lifeforce" culminates in a deliriously chaotic final act, with hapless Londoners attacked by cadaverous vampires while the space girl, having finally put on some clothes, prepares to zap everyone's life energies up to her orbiting spaceship.

The new Blu-ray/DVD combo set from Shout! Factory is a marked improvement on the non-anamorphic DVD released by MGM in 1998 and worth the upgrade, and not just for experiencing Ms. May in high definition.

At times absurd, at times thrilling, propelled by an energetic Henry Mancini score and featuring an early supporting performance by Patrick Stewart, "Lifeforce" is the sort of film you must see once just to know such things exist.
Posted by Franklin at 12:00 AM