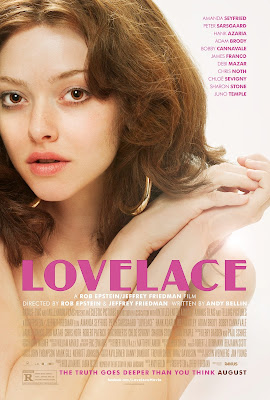 The first half of "Lovelace" is an airbrushed portrait of the sexual revolution in the early 1970s, as seen through the lens of the adult film business.

With the free-flowing fashions, Earth-tone hues, shag carpeting and a soundtrack of "AM Gold" hits, it's a comforting, almost nostalgic trip to a time that is simultaneously seedier yet more innocent than today.

It was a time when a movie called "Deep Throat" could upend middle class sensibilities while at the same time drawing audiences that lined up around the block, lines filled with celebrities, critics and just plain folks. When it was all done, "Deep Throat" had become the first pornographic film to become part of the national conversation, from talk shows to Johnny Carson monologues to Watergate informants.

The woman at the center of it was Linda Boreman, soon to be known to the world as Linda Lovelace, and the subject of Rob Epstein and Jeffrey Friedman's biopic "Lovelace" (rated R), now on video on demand and in limited theatrical release.

When we meet her, Linda (Amanda Seyfried, under a frizzy brunette wig and freckled makeup) is a naïve 21-year-old, living with her parents in Florida, where, we learn, they've fled in shame after Linda's out-of-wedlock pregnancy. The Boremans are a conservative, Catholic family. Linda's dad, John Boreman (Robert Patrick), is a former New York cop, and her mom, Dorothy, played by an almost unrecognizable Sharon Stone, believes the man in the family is the head of the household, and what he says goes.

Obviously, Dorothy's attitude will lead to trouble later on.

Soon, Linda meets Chuck Traynor (Peter Sarsgaard), who says he runs a restaurant and bar but tells Linda not to ask about what he really does. He provides an easy escape from Linda's stifling home life, and the next thing you know, they're married.

The film breezes through the couple's money problems, Chuck instructing the novice Linda in the ways of love and Linda apparently solving their money woes by parlaying her new skills into a career in adult films, culminating in her becoming a household name and partying with the likes of Hugh Hefner (James Franco, playing James Franco playing Hugh Hefner).

Linda Lovelace ceases to become the protagonist in her own movie. Even how she finally summons the courage to leave Chuck is lost as the movie flashes ahead several years to find Linda now happily married and a mother.

Seyfried again proves she is an underrated actress, as does Stone, who here completely sheds her femme fatale image. Both deliver performances better than "Lovelace" merits.

Ironies abound. "Deep Throat" launched a major free speech battle, in which Lovelace fought on the opposite side. But this look at the "Deep Throat" star lacks the depth to explore it, or her.
Posted by Franklin at 12:00 AM