For a film inspired by actual events, there is surprisingly little about "Hysteria" that rings true. 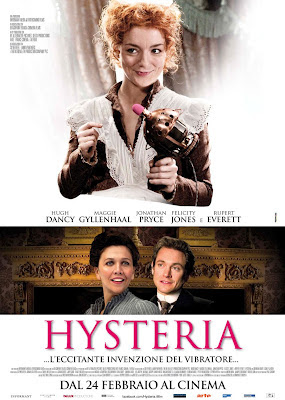 Director Tanya Wexler’s third and most ambitious movie is a romantic comedy set in the 1880s, when Queen Victoria reigned and Victorian values ruled. Unfortunately the romance is painfully obvious and the comedy is sorely lacking.

But what we get with "Hysteria," new to DVD and Blu-ray, is yet another uninspired entry in the genre I like to call "Making Fun of the Victorians."

It goes like this: "Oh, those silly Victorians and their silly ideas about sex and medicine and politics. It’s all so laughable, but thank goodness we’re far more sophisticated now."

Well, yes, people in Victorian times did believe lots of things that turned out to be wrong, and sometimes laughable, just as people who lived before them did. And, one day, 100 years from now — or sooner — people will look back at us, and they’ll point and laugh, too. It’s the way of things. But I’m not sure I’d try to build a movie around it.

Perhaps if the screenplay by Stephen Dyer and Jonah Lisa Dyer, from an original story by Howard Gensler, had stuck closer to the actual events rather than merely being inspired by them, then going off on the rom-com tangent, "Hysteria" wouldn’t be a limp, cliched snoozer that wastes the considerable talents of its cast.

Hysteria is a catch-all diagnosis, purportedly explaining everything from unladylike temperaments to thoughts of sex. And the treatment?

Manual stimulation. Unsurprisingly, the handsome Dr. Granville quickly becomes popular with Dr. Dalrymple’s patients. And soon, Dalrymple is eager to keep his medical practice in the family by marrying off his younger daughter Emily (Felicity Jones) to his protege.

Yet where there’s a younger daughter there must be an older one, and that’s the idealistic, headstrong Charlotte (Maggie Gyllenhaal), who may be suffering from hysteria herself, what with all her outlandish notions of helping the poor. And already you can guess where things are going.

Gyllenhaal does her best, but there’s no escaping the fact that as a character Charlotte is a cheat. Every time she goes off about how the world should be or will be, she’s speaking with the anachronistic knowledge of the screenwriters’ 130 years of hindsight. After a while, it doesn’t matter if she’s right; the whole exercise is tedious.

My prescription: Give "Hysteria" a rest.
Posted by Franklin at 1:26 AM