When "The Master" begins, Freddie Quell is already a broken man.

It's the end of World War II, and Freddie (a gangly Joaquin Phoenix) is getting ready to reenter civilian life. Along with a room full of fellow vets, he's told he can do whatever he wants — start a business, go to college, become a farmer, whatever. But his true prospects don't seem as inviting as all that. 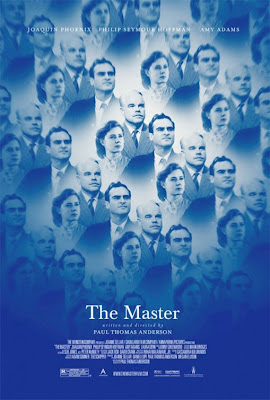 Freddie appears to suffer from what we today would call post-traumatic stress disorder. Back then it was just shell shock, and if you had it, some people thought that made you less of a man.
Directionless and prone to violent outbursts, Freddie is looking for something, but he doesn't know what. Then he meets a man who promises to show him a better way, to free him of the doubts, fears and uncertainties that prevent Freddie from being happy.

Writer/director Paul Thomas Anderson has said "The Master" has nothing really to do with Scientology, and that's true. While Philip Seymour Hoffman's Lancaster Dodd looks and sounds the part of L. Ron Hubbard, and while his ideas seem a lot like Scientology, especially in its earlier iterations, "The Master" isn't really about any of that. It could be almost any new religion or upstart movement.

Dwell on the Scientology similarities, and you miss the real story, Freddie's story. And his story is easy to miss, getting lost as it does in the film's 2 hour, 17 minute running time. It's a simple tale of one psychologically damaged man's ill-fated quest to find meaning in all the wrong places. But the epic length of the movie combined with Anderson's undeniable skill as a director are a temptation to over analyze "The Master." The film is so good in parts, you don't want to admit that maybe Anderson the screenwriter doesn't have as much to say as Anderson the director thinks he does, which becomes obvious as the final third drags slowly to a close.

"The Master" is less than the sum of its parts. It's filled with beautiful scenes, first and foremost a long and complex tracking shot of Freddie as he walks along a pier to Lancaster's boat, with Lancaster and company visible dancing on the upper deck. And the acting is superb, especially from Hoffman, who can go ahead and clear his schedule for the Oscars.

For anyone who wonders how some people can fall so thoroughly for seemingly obvious con men and snake oil salesmen, Hoffman has the answer. Lancaster Dodd is egotistical and can't tolerate being challenged, but he's also charismatic and genuinely cares about helping others, even if that's mostly because he regards their failures as his own, which he can't abide. What Lancaster isn't is a caricature, and Hoffman never lets him become one. Some of Lancaster's early auditing sessions even seem to help Freddie — for a while, anyway.

Equally good is Amy Adams as Lancaster's wife Peggy, whom Anderson has cast in what amounts to a Lady Macbeth role. Where Lancaster is sentimental, Peggy is practical and in control. When Freddie's presence becomes a distraction, she's the first to say he needs to go.

As for Freddie, Phoenix plays him broken physically as well as emotionally. We're never told he was injured during the war, but Freddie moves like he's pieced together out of other bodies' parts, a kind of Frankenstein monster demanding answers from a father figure who has no answers to give.

The acting and direction are enough to recommend "The Master," but if you're looking for great truths and insights, you, like Freddie, are looking in the wrong place. That seems to be the punchline; there's no more meaning here than there is in Lancaster Dodd's books.

Maybe that is the only point Anderson is trying to make.