My favorite 1980s teen angst comedy with a body count is being turned into a TV show. And no one — not the CIA, not the FCC, not the PTA — can stop it. 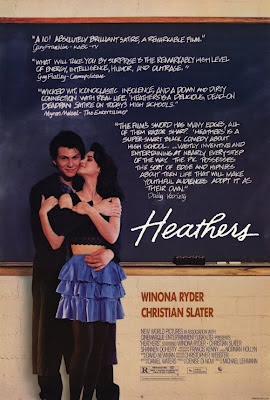 OK, it's not exactly a sure thing — yet. But Bravo announced last week that it is developing a TV series based on the 1988 movie "Heathers" starring Winona Ryder, Christian Slater and Shannen Doherty.

The series would pick up 20 years after the original, with Ryder's character, Veronica, returning to Sherwood, Ohio, with her daughter only to encounter a new, all-powerful high school clique, the Ashleys, who happen to be the daughters of the surviving Heathers, Veronica's frenemies from the original film.

The question is, has someone at Bravo had a brain tumor for breakfast?

You don't mess with perfection. And "Heathers" is pretty close to perfection.

Recently, "Sight & Sound" magazine asked more than 800 critics, filmmakers, academics and others to name the greatest movies of all time. The results created a stir when, after a 50-year reign, Orson Welles' "Citizen Kane" was deposed as the No. 1 movie by Alfred Hitchcock's "Vertigo."

The "Sight & Sound" list was outrageous for two reasons. First, neither "Vertigo" nor "Citizen Kane" is even its respective director's best film, much less best overall.

Second, I was not one of the 846 people asked to participate. So, I crafted my own top 10 list. And before you question my choices, just be aware that two critics who were part of the poll submitted "Zoolander." So there.

All, naturally, are debatable, and I'm told it's scandalous that I don't share the rest of the world's fawning appreciation for the first two "Godfather" films. (They're not even my favorite mob films. That's the Coen brothers' "Miller's Crossing.")

But my only admittedly oddball picks are "Lisa and the Devil," which I'll leave for another time, and "Heathers."

While Lehmann's borderline surreal direction is not to be underestimated, it's Daniel Waters' screenplay that makes the movie.

He delivers a world-weary broadside against the absurdities and hypocrisies of class, fashion, pop psychology and the education establishment. It's Generation X's manifesto, and it has inspired lesser imitators, from 1999's "Jawbreaker" starring Rose McGowan to 2004's Millennial Generation knock-off "Mean Girls" with a pre-meltdown Lindsay Lohan.

Change the clothes and hairstyles, and "Heathers" could be made today, which is probably one reason Bravo sees this as fertile territory to revisit. The social divisions of high school more and more seep into the world of allegedly responsible adults. The accessories change — I don't think Swatches are still in fashion, although I could be wrong — but the show goes on.

If you've never seen "Heathers" or you just haven't seen it lately, it's available on DVD, Blu-ray and Netflix instant. And, if Bravo's TV sequel goes forward, at least it'll have the side effect of getting this masterful film a larger audience. As Heather No. 1 might say, that would be very.
Posted by Franklin at 12:59 AM