By the early 1970s, the old-fashioned gothic horror that was Hammer Films' stock-in-trade for nearly 15 years was looking dated. Period pieces about vampires and mad scientists' monsters were out. 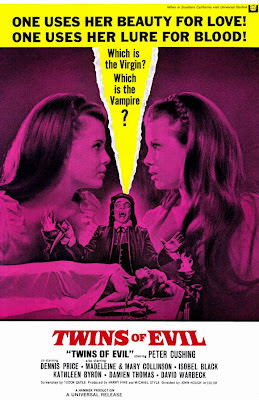 Contemporary films about joining a satanic cult and having the devil's baby were in.

Hammer tried, unsuccessfully, to get in on the act with 1976's "To the Devil a Daughter," which is best known today for it's revealing final scene featuring a young Nastassja Kinski.

But in 1971, Hammer took one of its last stabs at the period vampire story, and the result was one of the best films of Hammer's late period: "Twins of Evil."

Long unavailable in the U.S., "Twins of Evil" has been brilliantly restored by cult-film distributor Synapse Films and released as a Blu-ray/DVD combo. It's a fair bet the finished product looks as good if not better than when "Twins of Evil" was originally released.

"Twins of Evil" is the third and final installment in Hammer's loosely connected "Karnstein trilogy," three films all based, to one degree or another, on Irish author Sheridan Le Fanu's "Carmilla."

His tale of a female vampire stalking female victims, with its strong sexual themes lurking just below the surface, was perfect for Hammer, which was looking for stronger, sexier content in the face of lessened censorship and increased competition.

Yet, ironically, given it's Playboy Playmate leads, "Twins of Evil" is the tamest of the trilogy.

The story begins with orphaned twins Frieda and Maria (Madeleine and Mary Collinson, Playboy's first twin Playmates) arriving to live with relatives in 19th century Central Europe. But their uncle Gustav (Hammer mainstay Peter Cushing) is the leader of a Puritan sect seeking to rid the land of all forms of vice. And that doesn't sit well with the more adventurous twin, Frieda, who is quickly drawn to ribald tales of the local nobleman, the debauched Count Karnstein (Damien Thomas).

Unknown to the villagers, Karnstein is a vampire, and he easily entices Frieda with the promise of an eternal life away from her strict uncle, setting up the inevitable conflict with her virginal sister, who, we must not forget, is also her twin. So you know where this is going.

What sets "Twins of Evil" apart is its rejection of simple, either/or dichotomies. Earlier vampire films, including Hammer's, paint vampires as a threat to good and decent Victorian morality. Many of Dracula's female victims only come alive, metaphorically speaking, as vampires — Barbara Shelley's Helen in "Dracula: Prince of Darkness" is a prime example. But then it is up to strong, heroic, Victorian menfolk to put stakes through their hearts and save their souls.

For much of "Twins of Evil," however, it's hard to tell who is the real villain, the moralist Gustav Weil or the immoralist Count Karnstein. Fortunately, this time they don't represent the only options. 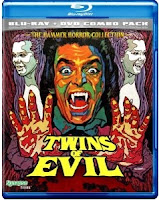 Although overshadowed by Cushing's other Hammer roles, notably Baron Frankenstein and Professor Van Helsing, Weil is a brilliant performance. Cushing plays him with unquestionable conviction. Even if he is a misguided crusader with a simplistic view of what is righteous, one thing Weil is not is a hypocrite. And he is never such a caricature that it's impossible to feel sympathy for him. For fans of the horror master, this is an essential performance.

For fans of classic horror, Synapse's restored "Twins of Evil" is an essential release, not the least for the bonus documentary feature "The Flesh and the Fury: X-Posing Twins of Evil." At 84 minutes, it's nearly as long as the film itself, and it covers everything from Le Fanu's original story, to the first two Karnstein films, "The Vampire Lovers" and "Lust for a Vampire," to the final days of the original Hammer Films.

"Twins of Evil" is one vampire movie that has been left in the crypt far too long.