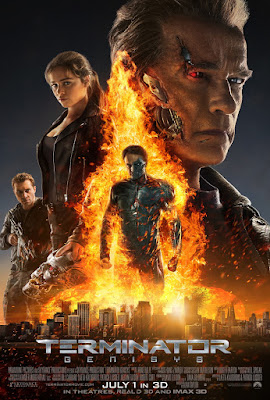 By all rights, “Terminator 2: Judgment Day” should have been the end of the line. The machine apocalypse had been averted, the loop in time had been closed and the audience was left, quite unexpectedly, with a happy ending.

But if there’s one thing the Hollywood studios hate more than reasonable copyright laws, it’s happy endings. Leaving the audience wanting more is the same as leaving money on the table, and that just won’t do. So we got seven “Saw” movies in as many years. Hollywood will dish it out until you’re sick of it, and then some.

That’s why, despite the fact “Terminator 2” left no room for a sequel, 2003 brought us director Jonathan Mostow’s “Terminator 3: Rise of the Machines,” which was all about that thing “Terminator 2” prevented happening. And that was just where the trouble started.

You might think Arnold Schwarzenegger taking time away to play the Governator of California would spare us yet another unnecessary “Terminator” installment, but you’d be wrong. The franchise hit its lowest point yet in 2009 with “Terminator: Salvation,” directed by “Charlie's Angels: Full Throttle’s” McG and starring “Avatar’s” charisma-challenged leading man Sam Worthington at the height of his inexplicable rise to fame.

With Schwarzenegger back to making movies, yet another “Terminator” sequel was inevitable. So we now have “Terminator: Genisys,” directed by Alan Taylor, whose other credits include “Game of Thrones” and Marvel’s most disappointing movie to date, “Thor: The Dark World.”

The good news is “Terminator: Genisys” is better than its two immediate predecessors. The bad news is that’s still not nearly good enough to justify its existence.

“Genisys” starts with the events leading up to James Cameron’s original “The Terminator.” That means we get to see John Conner (Jason Clarke) send his father Kyle Reese (Jai Courtney) back in time to save his mother Sarah Conner (“Game of Thrones’ ” Emilia Clarke) from Schwarzenegger’s T-800 so that John can be born and lead humanity to victory over the machines.

Only this time when Reese arrives in 1984 Los Angeles, he doesn’t find the past we know. Instead he finds a Sarah who is prepared for both him and the T-800, as well as a second T-800 that was sent back to an even earlier point in time and programmed to protect Sarah. And that’s before the shape-shifting T-1000 (Byung-hun Lee) from “Terminator 2” arrives — 11 years ahead of schedule.

It’s a premise that requires a lot of mostly nonsensical plot exposition. Unfortunately, there are few things more awkward than Schwarzenegger portraying a robot tasked by the script with explaining quantum physics and temporal paradoxes. Such things are better left to eccentric Time Lords.

Speaking of which, Matt Smith (“Doctor Who”) has what amounts to a cameo, no doubt meant to set up a larger role for his character in future unnecessary sequels.

Basically, humans and Terminators have jumped through time so many times they’ve managed to break time itself, which is as good a metaphor as any for what all this time hopping has done to the “Terminator” franchise. In other hands, “Terminator: Genisys” could have been a sly, tongue-in-cheek commentary on Hollywood’s financial dependence on sequels and remakes, always repeating itself with minor variations. But screenwriters Patrick Lussier and Laeta Kalogridis play it all depressingly straight, littering their script with callbacks to the other “Terminator” entries without a hint of irony.

The result is “Terminator: Genisys” plays like a greatest hits album, only the hits are all performed by cover bands. We’ve heard them before, and they were better the first time. Nothing in “Genisys” tops “Terminator 2’s” stunts, while Clarke and Courtney have the impossible task of following in the footsteps of Linda Hamilton and Michael Biehn, and doing so with inferior material.

The lesson here is if time travel ever is invented, it’s probably too dangerous to use. But if we do use it, we should send someone to the past to stop all these unnecessary “Terminator” sequels. With any luck, the Terminator won’t be back.
Posted by Franklin at 12:00 AM