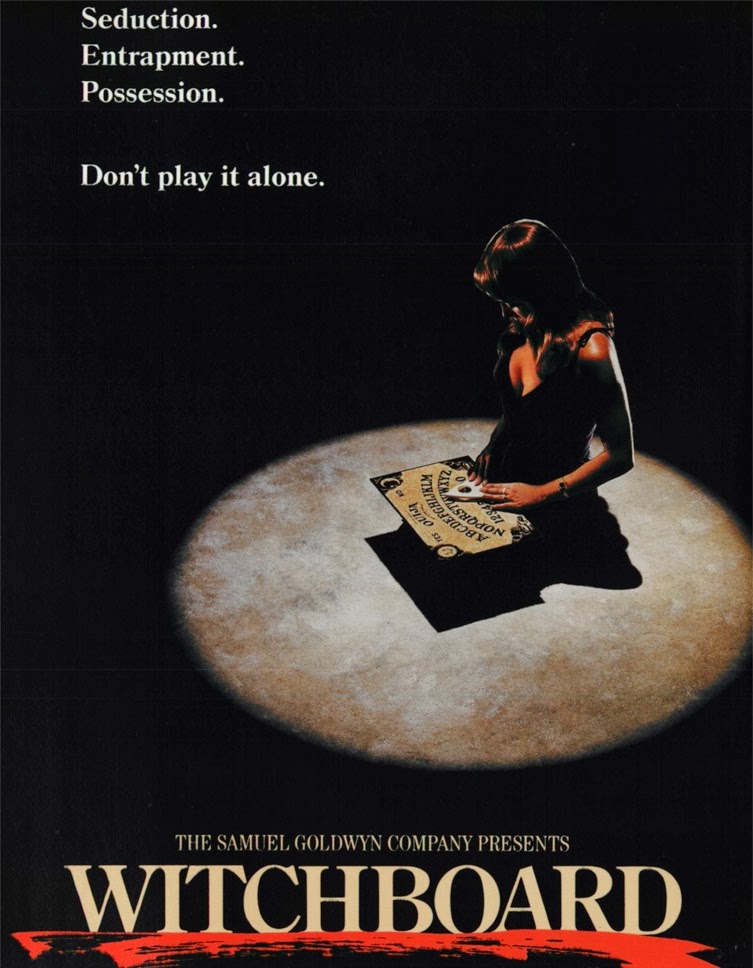 The best movie based on a board game is "Clue." The worst is "Battleship." Somewhere in between is "Witchboard," based on the popular Parker Brothers game Ouija, in which players pretend to communicate with the dead.

Think of Ouija as the home version of such television shows as "Crossing Over with John Edward" or "Ghost Hunters." It's a lovely parting gift for the dearly departed.

Some people will believe anything, including that a $19.99 novelty item available at Toys R Us is a good way to carry on conversations with ghosts. In my experience, Ouija boards are mostly a good way for tipsy partygoers to get a shriek out of their more gullible, more inebriated friends.

When it comes to shrieks, Ouija boards are more successful than 1986's "Witchboard," which is disappointingly timid when it comes to delivering the goods. Chalk it up as another movie that was better when I was a teenager. Twenty-eight years later, the chill is gone. But "Witchboard" is back, new to Blu-ray and DVD from Shout Factory as part of the label's deep dive into 1980s horror.

"Witchboard" opens at (where else?) a party, where we meet our three leads. There's Jim (Todd Allen), his girlfriend Linda (Tawny Kitaen, of Whitesnake music video fame and "Celebrity Rehab" infamy) and her ex, Brandon (soap star Stephen Nichols of "Days of Our Lives").

"Jim, His Girlfriend and Her Ex" almost sounds like an Italian sex comedy, or a sitcom set in a pizza parlor, maybe. But I digress.

Jim and Brandon are also former friends, and there's so much simmering resentment in the room you wonder how Brandon got invited to the party in the first place.

That's when Brandon breaks out his Ouija board, because demonstrating one's occult prowess is always a good way to prove that your ex picked the wrong guy. Anyway, Brandon makes contact with the spirit of a 10-year-old boy, which Jim immediately ticks off by asking stupid questions.

Linda, however, is impressed. The next morning she starts fooling around with the Ouija board on her own, which, as it turns out, is something you should never, never do. (Don't board games come with instructions?) Before long, she's exhibiting strange behavior, such as using profanity. As "The Exorcist" taught us, talking dirty is a sure sign of a woman possessed.

It comes down to a race against time. Can Linda's boyfriend and her ex put aside their differences before she ends up the host of an evil spirit? More importantly, why would she date either of these jerks in the first place? (Spoiler: They eventually act less like jerks, but the question stands.)

Writer/director Kevin Tenney hit pay dirt with "Witchboard," which was popular enough to spawn two sequels, one of which he directed. Tenney is currently seeking to finance a remake.

But nostalgic fondness aside, the film has not aged well. It's not suspenseful, the jump scenes barely register and the comic relief falls flat.

The comedy mostly comes from Zarabeth (Kathleen Wilhoite), a psychic whom Brandon enlists to exorcise Linda's apartment. Imagine if Steve Urkel died and was reincarnated as a white woman. That's Zarabeth. After she awakes from her exorcism trance, you expect her to look around the room, see the resulting mess and ask, "Did I do that?" Now that's scary.

Even the unintentional humor doesn't go far. At best, we get to snicker at the '80s hair. There are so many mullets in "Witchboard" you might think you're at a hockey game in Manitoba.

But on to what you really want to know: Does Kitaen take her clothes off? Yes, yes she does, in a shower scene that exists just for that purpose. But if a topless Tawny is what you want, you're better served tracking down a copy of 1984's "Gwendoline," with Kitaen in the titular role. Believe me, in "Gwendoline" she can hardly Kitaen herself.

I apologize for the previous paragraph. I was briefly possessed by the spirit of Gene Shalit.

What do you mean Gene Shalit isn't dead?
Posted by Franklin at 12:06 AM