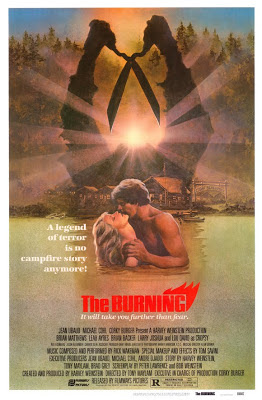 In a classic "Seinfeld" episode, "The Opposite," George Costanza, realizing his instincts are always wrong, decides to do the opposite of what they tell him. When his instincts say lie, he tells the truth. When his gut reaction is do nothing, he does something. The strategy works miracles.

Now apply it to slasher movies, where kids, campers and promiscuous teenagers have been doing the wrong thing for roughly 35 years. When your instinct says wander away from everyone for a skinny dip, don't. When your gut says make out with your boyfriend in the woods, don't. When you think you should go down to the basement alone, don't.

That would make for a slasher movie with a very low body count. Fortunately for us, kids in slasher movies always go with their guts, even if that means their guts end up on the floor, and especially when one of those kids is "George Costanza."

Long before he was George, Jason Alexander was Dave, one of the unlucky campers in the 1981 horror flick "The Burning," slickly promoted with a trailer in which the announcer gravely intones lines like, "If you're looking forward to midnight swims, don't."

Without an endless stream of sequels and remakes to keep its name alive, "The Burning" has fallen into obscurity. That's a shame because it's not only one of the best slasher movies to come out of the '80s, it has a pedigree that's pretty remarkable. It's the first film produced by the now powerhouse team of Bob and Harvey Weinstein, it features makeup effects by Tom Savini and a creepy electronic score by Yes keyboardist Rick Wakeman, and it's the first screen credit for not only the future George Costanza but also Fisher Stevens ("Short Circuit") and future Oscar winner Holly Hunter.

It's now been rescued from the vault by Shout! Factory, which has released "The Burning" in a DVD/Blu-ray combo "collector's edition" that looks great without bleaching away the film's lo-fi roots.

The story, which the Weinsteins co-wrote, draws from campfire tales counselors told to scare young New Yorkers at Hudson Valley summer camps in the 1960s and '70s. When a prank goes awry, Camp Blackfoot's creepy handyman, Cropsy (Lou David), is burned alive. He survives, barely, but returns as a horribly disfigured boogeyman to have his revenge.

It's not exactly a plot-heavy movie. Even "Friday the 13th" has it beat on that count. But it is character-heavy for a slasher flick, taking its time to let us care about some of these stock characters (the good girl, the bad girl, the jock, the dweeb) before they are gruesomely dispatched.

Unlike the "pure evil" Michael Myers but like the childlike Jason Voorhees, Cropsy flirts with being a sympathetic figure. Even if it's largely misdirected, his rage is born of mistreatment. He's the teased and humiliated outsider who is ignored, except as a subject of ridicule, and treated as something less than human even before his transformation into an unstoppable killer.

As far as the campers who accidentally set Cropsy on fire are concerned, he's a monster even before he comes back seeking vengeance. But when we see their contorted faces watching through the window as Cropsy awakes screaming, we wonder who the real monster is. When it comes to monsters, kids can be the cruelest of all.

But apart from drive-in sociology, "The Burning" delivers where it really counts.

Cropsy's garden-shears killing spree serves up several great kills, which are the main reason we're watching, and the rules of the slasher genre were still in flux in 1981, so some of the attacks still can surprise. They're not all variations on the kill scenes we've seen in the "Halloween" and "Friday the 13th" sequels.

So maybe there is an upside to being virtually forgotten: No one spends the next three decades ripping off your best tricks.
Posted by Franklin at 12:00 AM