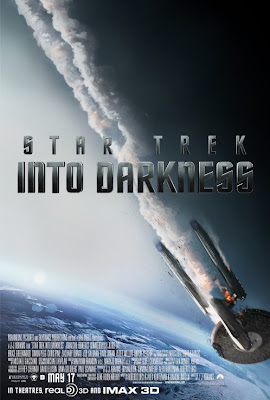 "Star Trek Into Darkness" is like a greatest hits album of all your old favorites, only rerecorded by Muzak. It's turbolift music.

It's called "Star Trek," the characters have the same names as the "Star Trek" characters who appeared on TV in the 1960s, and the plot borrows liberally from where many "Star Treks" have gone before. But this is a "Star Trek" Gene Roddenberry would barely recognize.

Director J.J. Abrams — already jumped ship to the "Star Wars" franchise — has put his distinctive mark on the "Star Trek" universe. Well, I say "distinctive," but how distinctive is a generic summer action movie with nothing to set it apart from the competition except Abrams' bizarre obsession with lens flares?

I'm not sure who the intended audience is. From beginning to end, "Star Trek Into Darkness" is a patchwork of allusions, in-jokes, and red herrings that depend on a working knowledge of the "Star Trek" mythos. Yet Abrams, his regular screenwriting collaborators Roberto Orci and Alex Kurtzman, and co-writer Damon Lindelof have so warped everything they've pilfered from Treks past that I can't imagine many longtime Trekkies (or Trekkers) being happy with the results.

And the movie's emotional high points are completely unearned. We may have known these characters for years, but as far as they're concerned, they just met.

Meanwhile, an unschooled viewer isn't likely to get much besides motion sickness.

When last we left the crew of the USS Enterprise, they had just been placed under the command of a smug rookie captain with almost no experience outside of the academy, because Starfleet will apparently hand over its newest ship to just about anyone. To its credit, "Star Trek Into Darkness" starts out addressing that issue, with Capt. Kirk (Chris Pine) so flagrantly violating Starfleet protocols that he is relieved of command.

There is a fine line between Kirk as charming proto-"Mad Men" womanizer (as played by William Shatner) and Kirk as oversexed fratboy douchebag. Pine's Kirk crosses it like the Kobayashi Maru crosses the neutral zone. But even that is easy to take compared to the lovebird bickering between Spock (Zachary Quinto) and Uhura (Zoe Saldana). I wonder if Uhura will remember she's dating a Vulcan? I wonder if Spock will remember it's illogical to date a junior officer? Eh, guess not.

Of course, Kirk isn't out of the captain's chair long before a terrorist attack aimed at Starfleet's senior officers puts him back on the Enterprise bridge, with orders to hunt down and kill the terrorist, allegedly a rogue Starfleet officer named John Harrison (Benedict Cumberbatch).

It's hardly a spoiler to give away that Harrison is actually Khan in disguise, because apart from the name, this character is nothing like the one Ricardo Montalban portrayed in "Space Seed" and "Star Trek II: The Wrath of Khan." Cumber-Khan, as I call him, is some sort of ridiculous super-ninja with magic healing blood. His midi-chlorians must be off the scale. Why call the character Khan when he's nothing like Khan, except as a bone to fans who would rather just watch "Star Trek II" again?

Well, this is, in part, a Lindelof script, and as he showed us with "Prometheus" and "Lost," stories that make sense and characters who behave somewhat rationally are not his forte. Ask yourself why anyone in "Star Trek Into Darkness" does what he does, and you'll unravel the tapestry.

And as brilliant and fun to watch as Cumberbatch is in the BBC's "Sherlock," he's simply tiresome here, as are most of the performances, apart from Karl Urban's underused Dr. McCoy, who does recall DeForest Kelley's cantankerous but humanistic portrayal.

Abrams has said he was never a "Star Trek" fan, and it shows. His two films play like a reconstruction from a CliffsNotes synopsis. Well, whatever. He is "Star Wars" fans' problem now.