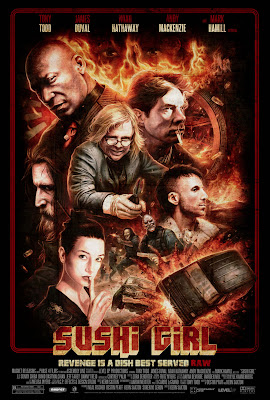 Sushi is also a dish best served cold, and "Sushi Girl" makes it a buffet of both.

The debut feature film by director, co-writer and co-producer Kern Saxton, "Sushi Girl" (DVD, Blu-ray and streaming on Netflix and Amazon) is probably the best Quentin Tarantino movie Quentin Tarantino didn't make. Admittedly, that's a low bar. QT has many imitators, some of whose films he even produced, but imitation has become the sincerest form of failure.

Saxton doesn't fail, but he doesn't entirely succeed either, delivering what basically is a remake of  Tarantino's "Reservoir Dogs" in all but name. It even opens with a classic Tarantino trope: another movie's title song, in this case Shirley Bassey's "Diamonds Are Forever."

Six years after a diamond heist gone bad, Fish, the one thief who didn't get away, is unexpectedly released from prison — time off for good behavior — and whisked away to a gathering in his honor.

If Fish seems vaguely familiar, that's probably because he's portrayed by Noah Hathaway, who as a child played Boxey in the original "Battlestar Galactica" before becoming a teen heartthrob as Atreyu in 1984's "The Neverending Story."

The other four attendees are his former partners in crime. And the big boss, Duke, played by Tony Todd ("Candyman") has set out a feast to celebrate the prodigal son's return: sushi served on the nude body of a beautiful woman, paid not to react to anything she sees or hears.

This silent, unmoving "sushi girl" (Cortney Palm) is our window into their world.

So, after a little bit of reminiscing about old times, Fish's old crew has only one question for him: Where are the diamonds?

Best just to say that what follows involves a chair, duct tape and lots of everyday household implements both sharp and blunt. And while Duke and his gang try to get answers out of Fish, the film dribbles out a few answers of its own, in flashback.

An imposing 6-foot-5 with an even more imposing voice, Todd, who also served as executive producer, brings much-needed gravitas to the proceedings, while Hathaway plays on our sympathy by working those expressive brown eyes of his. Hathaway hasn't been in front of a camera in nearly 20 years, but he hasn't lost a step since he was a kid actor having to react to imaginary creatures just off-screen.

Rounding out the gang without making much of an impression are James Duval as the one member who has sympathy for Fish and Andy Mackenzie as the team's muscle.

That leaves only the resident psycho, Crow, played as a gay stereotype by Luke Skywalker himself, Mark Hamill. Hamill has spent so long as a voice actor for cartoon characters it seems to be his default mode, and he plays Crow as a cross between his own Joker from "Batman: The Animated Series" and Heath Ledger's Joker from "The Dark Knight," complete with a tangled mop of greasy blond hair.

You get the feeling Hamill is not acting in the same movie as everyone else. He'd be more at home in Gotham, perhaps discussing the merits of market fresh strawberries with Bane. And that's got to make anyone looking forward to Hamill possibly appearing as Luke in the upcoming "Star Wars: Episode VII" just a little bit nervous.

Tarantino veterans Jeff Fahey, Michael Biehn and Danny Trejo show up for glorified cameos, as does the legendary Sonny Chiba as the sushi chef, who might as well be — and probably is meant to be  — Chiba's Hattori Hanzo character from QT's "Kill Bill."

Overall, "Sushi Girl" is a pleasant enough diversion, with a twist you'll probably see coming. But its main fault is that nothing lives up to the promise of the stylish opening titles.