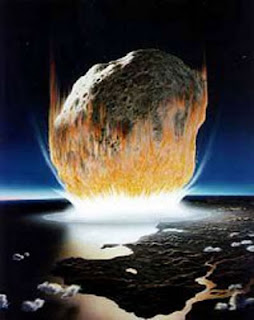 I was flipping channels Sunday night and happened upon the end of the world.

Jason Alexander of "Seinfeld" fame was in a military command post trying to help the Air Force — at least I think it was the Air Force — shoot down a huge asteroid that was threatening to wipe out all life on Earth.

The fate of the Earth in the hands of George Costanza? We're doomed.

Fortunately, it was just the first half of NBC's two-part miniseries "Meteor: Path to Destruction." Unfortunately, the second part airs Sunday, and at this point, I suspect many viewers would just as soon it not.

The gratuitous subtitle, "Path to Destruction," may be to avoid confusion with the 1979 feature film "Meteor," which starred Sean Connery and Natalie Wood. Or maybe not, since I'm one of only three people who remember that James Bond has already dealt with this exact same plot device.

Disaster epics like NBC's "Meteor" always seem to come in pairs. Last month, ABC aired its own ludicrous miniseries, "Impact," in which the moon ends up on a collision course with Earth. This recalls the summer when "Deep Impact" and "Armageddon" dueled it out at the box office, with the louder and sillier of the two, "Armageddon," reaping the bigger take, thanks to Bruce Willis' star power and Liv Tyler's ability to pout on cue.

There must be an audience for movies about big rocks falling from the sky or else Hollywood wouldn't keep making them. And why not? After all, it's a certainty that the Earth will end up in the crosshairs of a devastating comet or asteroid — eventually. It's happened before. Just ask the dinosaurs.

In fact, we have a close call in our near future. According to some calculations, there is a 1 in 45,000 chance that the asteroid Apophis — named for the Egyptian god of chaos and darkness — will strike the Earth on April 13, 2036. And while 1 in 45,000 may seem like pretty long odds, it's enough to make some astronomers sweat just a little.

With Apophis and other near-Earth objects looming in space, scientists have begun putting a lot of thought into how we might divert any that could become potential planet killers. Most of the ideas so far involve shifting the threatening meteor off course by a few degrees, either by attaching a rocket engine to it or by maneuvering a probe close enough that the probe's gravity can tug the meteor off target.

But nothing on the drawing board resembles Hollywood's preferred method of dealing with threats from space. Call it the Michael Bay Method, after "Armageddon" director Michael Bay.

From "Bay Boys" to "Transformers: Revenge of the Fallen," Bay has demonstrated that there is one solution to every problem — blow something up.

Yet despite what you may have seen in "Armageddon," blowing up an asteroid or comet is probably the last thing you want. Instead of one big rock, you end up with a lot of smaller rocks raining down on you with almost the same mass, minus the pieces that are small enough to burn up in the atmosphere.

George Costanza didn't get that memo, which is why he and the military are launching every nuclear missile they can get their hands on, plus Patriot missiles to shoot down anything that survives the big boom.

If that seems absurd to you, that's because it is absurd. But you haven't seen anything until you've seen a soldier shoot down a small meteor with a shoulder-fired Stinger missile. Yes, "Meteor: Path to Destruction" is full of comedy gold. They should have called it "Meteor: Path to Wackiness."

I don't ask for much from network television. But is it too much to ask that each new movie about a big rock from space not be dumber than the one that came before it?
Posted by Franklin at 12:32 AM