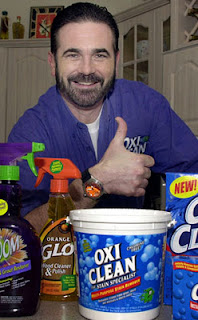 It has been a bad summer for 1970s celebrities.

Ed McMahon, Farrah Fawcett and Michael Jackson, all of whom reached the heights of their popularity during the '70s and early '80s, pulled a celebrity-death trifecta last week, dying within days of each other. They followed David Carradine, star of the cult-favorite TV series "Kung Fu," who died early last month.

But the Grim Reaper's reign of terror didn't end there. Even lesser-known celebrities were not immune. Impressionist and frequent "Late Show with David Letterman" guest Fred Travalena and TV pitchman extraordinaire Billy Mays died during the past few days, too.

(Sky Saxon, lead singer for the 1960s band The Seeds, also died. But I'm only counting celebrities I had heard of beforehand.)

But Paul Lynde has been keeping heaven's center square warm since 1982, so I figure the afterlife needs only two more.

Mays' death also briefly brought to mind actress Natasha Richardson's passing earlier this year. She died hours after sustaining a head injury while skiing, and early reports suggested Mays might have suffered a similar fate. Not long before his death, Mays took a blow to the head when the commercial airliner he was aboard experienced a hard landing. Preliminary autopsy results released Monday, however, ruled out head trauma in Mays' case.

Media reaction to this epidemic of celebrity deaths has been a bit strange. A lot of my friends noted Jackson's death happened just in time to overshadow Fawcett's. Her passing could have topped newscasts all weekend long, but in Jackson's wake, it was almost an afterthought.

Then Mays died, and he seemed to get a lot more attention than a TV pitchman normally would, as if to give people something to talk about besides the King of Pop.

I was surprised to learn Mays actually had a compelling life story. He was discovered while selling products on the famed Boardwalk in Atlantic City, N.J. For a TV pitchman, that has to be the fairytale equivalent of a would-be movie star being discovered at a drugstore soda counter at Hollywood and Vine.

Has Mays upped the ante? When Ron Popeil, the most famous TV pitchman of all, dies, will CNN devote wall-to-wall coverage to him? I can see it now: Even the History Channel could get involved, devoting an entire episode of "Modern Marvels" to Mr. Microphone and the Pocket Fisherman.

The weird thing about celebrity deaths is how so many people take them personally. A conversation about Fawcett's death inevitably turns to "Hey, when I was young, I used to have that poster of her in the swimsuit." Any discussion of Jacko will eventually lead to someone talking about owning "Thriller" — on vinyl — and doing the moonwalk.

Of course, virtually all of Generation X owned that poster and had a copy of "Thriller" — on vinyl — and did the moonwalk. Or at least tried to do the moonwalk. All of these "personal" experiences are as close to universal experiences as American culture gets. Yet people feel some strange urge to personalize the deaths of celebrities they probably never met and certainly didn't really know. It's probably a primal, instinctual reaction. After all, death is supposed to mean something, and we all feel like we know these people simply because we've invited them all into our living rooms.

So what if Ed never came around anymore and we hadn't seen Farrah in years and Michael wasn't the Michael we all used to know? They were the old friends we hadn't really thought about for a long time — until we learned they were gone.

And Billy was the sitcom neighbor who always let us borrow a tub of OxiClean.
Posted by Franklin at 12:00 AM