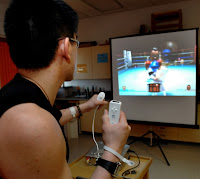 After years of being an also-ran, Nintendo is riding high again with its new Wii video game console, which has become the must-have system by breaking all the rules.

Gamers can be fiercely partisan when it comes to their favorite game systems, so I'll start by saying I don't have a Mario Kart in this race. I haven't owned a console game system since the Atari 2600, and the last PC game I bought was Diablo II. My idea of a killer application is Pitfall.

I know. I'm showing my age.

Currently, sales of Nintendo's Wii have outpaced by about 2-to-1 those of Sony's new PlayStation 3. In January, Wii sales also surpassed sales of Microsoft's Xbox 360.

How did Wii become the No. 1 game system?

It wasn't by beating PS3 and Xbox at their own game. Rather, it was by starting a whole new game. Wii hit the "reset" button in the console wars.

Before Wii came along, Nintendo, Sony and Microsoft were locked in an arms race. Each new game system was faster, more powerful and more versatile than the one that came before it. But after PS2 and the first version of Xbox trounced Nintendo's GameCube, Nintendo had to find a new strategy or risk going the way of Sega, which abandoned the console business after its Dreamcast failed to catch on.

That would have been a sad end for Nintendo's game console division, which had reinvigorated the home video game market in the mid- and late 1980s, after the early '80s Atari boom went bust.

But with Wii, Nintendo has changed the playing field. Wii forces players to get off their sofas and truly interact with the games. When you play Wii bowling or tennis, you're literally going through the motions of playing the game in real life. This has the added advantage of making game play simple enough for even the least tech-savvy player.

So, I wasn't really surprised to read a Reuters story last week about a retirement community where residents organized their own Wii bowling tournament.

When 80-year-olds are playing video games, something strange is going on. After all, these are people who didn't even play Pac-Man when they were young.

Wii making players more active participants in the game experience is a natural evolution. And we can see where it's heading — toward the sci-fi dream of virtual reality, in which players don't merely play a game, they're part of it.

Don't expect Sony and Microsoft to sit back while Nintendo gobbles up market share. They'll develop responses to Wii just like they came up with bigger and better consoles to compete with the Nintendo Entertainment System and the Super NES back in the 1990s.

Imagine a game with the intuitive, immersive game play of the Wii combined with the cutting edge graphics of the PS3. And if you can't imagine it, someone at Sony probably already has.

And when someone comes up with a role-playing or fighting game that plays like one of the sports games for Wii, Nintendo may find itself back on the defensive.

In the breakneck world of technological innovation, video game companies are the ones that can least afford to rest on their last big breakthrough.
Posted by Franklin at 12:00 AM