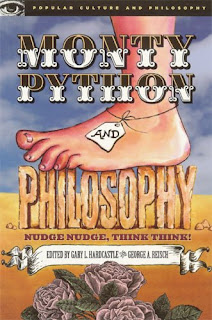 For some academics, it's symbolic of a commercial culture that trivializes important subjects. But for others, it reflects how popular culture translates big ideas into a language the average person — who has never so much as cracked open a copy of Aristotle or Wittgenstein — can understand.

You can find pop-philosophy books dealing with everything from "Star Trek," "Harry Potter" and "Buffy the Vampire Slayer" to "The Simpsons," "The Sopranos" and the films of Woody Allen.

Chicago-based Open Court Publishing dominates the market with its Popular Culture and Philosophy series. Open Court is a mainstream philosophy publisher. The company's editorial director, David Ramsay Steele, is author of the heady tome "From Marx to Mises: Post-Capitalist Society and the Challenge of Economic Calculation." (I've read it, and it's serious stuff.)

But as the company's chief executive officer told a Forbes Small Business reporter in 2004, Open Court stumbled onto a financial bonanza in 2001 with its first pop-culture volume, "Seinfeld and Philosophy." It sold 7,000 copies its first year, which doesn't sound like much but is a respectable figure for a philosophy book.

Success breeds imitation, which is why there are two books titled "South Park and Philosophy," one from Open Court and one subtitled "You Know, I Learned Something Today" from Blackwell Publishing, which has its own philosophy/pop-culture imprint.

No pop-culture subject is immune from serious philosophical scrutiny. Superhero tales are, for the most part, morality plays dressed in capes, and "Superheroes and Philosophy" spends a lot of pages examining the ethical and political implications of vigilante justice. The book's best chapter is former Auburn University professor Aeon J. Skoble's essay on the graphic novels "Watchmen" and "The Dark Knight Returns."

Of course, some works of popular culture are explicitly philosophical, like "The Matrix" and its sequels.

The sequels get bogged down in self-importance, but the original manages to touch on several major philosophical controversies without forgetting to entertain. "The Matrix and Philosophy" examines many of them, my favorite being the question of whether living in a virtual-reality simulation is a rational alternative to life in the real world.

Nozick calls his thought experiment "the experience machine." He asks that we imagine ourselves as disembodied brains connected to a machine that can give us any experience we want. As he sketches his argument, he shows that such experiences, however pleasurable, are inferior to life in the real world because there are things like truth that are more important than mere pleasure.

But I know of at least one philosophy professor who, year in and year out, has freshmen classes who overwhelmingly say they'd prefer to spend their entire lives hooked up to Nozick's experience machine. That alone tells me we need philosophy books aimed at a popular audience. Otherwise we'll have a generation of college students who welcome their robot overlords!
Posted by Franklin at 12:00 AM