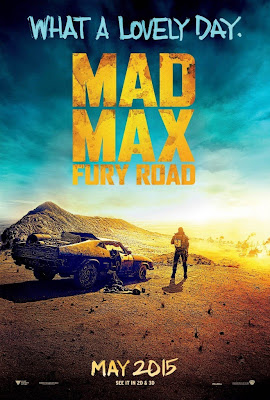 With its minimal plot and intricately staged mayhem, George Miller’s “Mad Max: Fury Road” is an action movie made into a Las Vegas hotel’s resident show. Think of it as Cirque du Apocalypse.

Cars, motorcycles and tanker trucks — all outfitted for war — spin, jump and collide as they speed across a landscape rendered cinematic by nuclear holocaust. This goes on for roughly two hours.

Miller’s return to the world he last visited in 1985’s “Mad Max: Beyond Thunderdome” is a feature-length car chase executed with uncommon visual flair. At age 70, Miller retains his sense of style.

Also, an estimated budget of $150 million will buy you a lot of crashes and explosions.

The lavish praise most critics have heaped upon “Fury Road” is understandable, as is the moviegoing public’s relative indifference. Any action movie that isn’t in the style of Michael Bay’s poorly shot, badly edited and generally incoherent mode of filmmaking is a welcome respite. Critics have rewarded Miller accordingly, with a 98 percent fresh score on the Rotten Tomatoes meter.

Most moviegoers, however, seem content with the usual Bayhem, and they aren’t much interested in a film franchise that went dormant before most of them were born.

It isn’t just that Miller is a better action director than virtually anyone else handed a $150 million budget nowadays. It’s that his deceptively simple story leaves us with a lot of ideas to unpack.

Max, played by Tom Hardy, is a supporting character in his own film. With his story already told in the three previous installments starring Mel Gibson, Max is now our entry point for other characters’ stories. In “Fury Road,” those other characters are Charlize Theron’s Imperator Furiosa and the women she is helping to escape lives as sex slaves and broodmares to monstrous cult leader Immortan Joe (Hugh Keays-Byrne).

“Fury Road” will seem familiar to aficionados of post-apocalyptic cinema. The film’s plot is a reworking of 1987’s “Hell Comes to Frogtown,” starring pro wrestler Rowdy Roddy Piper (“They Live”). Both movies feature a reluctant hero forced by circumstance to help women escape from a hideous mutant’s harem, and both wear their sexual politics on their sleeves.

While “Hell Comes to Frogtown” plays the war between the sexes for laughs, “Fury Road” plays it straight, which can be jarring for a movie in which so much else is deliberately absurd.

Immortan Joe and his followers are cartoon characters. Wearing a face mask that renders his speech a bellowing mumble, Immortan Joe might well be a parody of Hardy’s Bane in “The Dark Knight Rises.” Joe and his “war pups” ride into battle spurred on by thundering drums and a screaming electric guitar — a leather-and-chains update of the fife and snare that led 18th century armies into battle. It’s a send-up of hyper-masculinity, contrasted with the earnest feminism of Furiosa and the other escapees.

“Fury Road’s” feminism is unavoidable. It’s in the title and in Furiosa’s name, which both recall the Furies of Greek myth — female spirits of vengeance.

Yet the feminism of “Fury Road” isn’t the feminism currently in fashion in academia or at websites such as Jezebel. “Fury Road” takes as given innate differences between men and woman that can’t be explained by alleged patriarchal social conditioning. In “Fury Road,” men are naturally more aggressive and women naturally more nurturing. Furiosa has shaved her head and become more physically masculine to survive, but she seeks to escape to the matriarchal paradise of her childhood, where women safeguard seeds and hope to restore life to the barren wasteland.

The movie’s climax then adds another wrinkle. Matriarchy ends up being just as much an illusion as patriarchy. In the end, men and women work together, and women redeem the civilization men have already started to rebuild from the rubble of the one they destroyed.

Action movies this simple yet this layered are rare. “Fury Road” is a film to be emulated, not a road less traveled.
Posted by Franklin at 12:00 AM