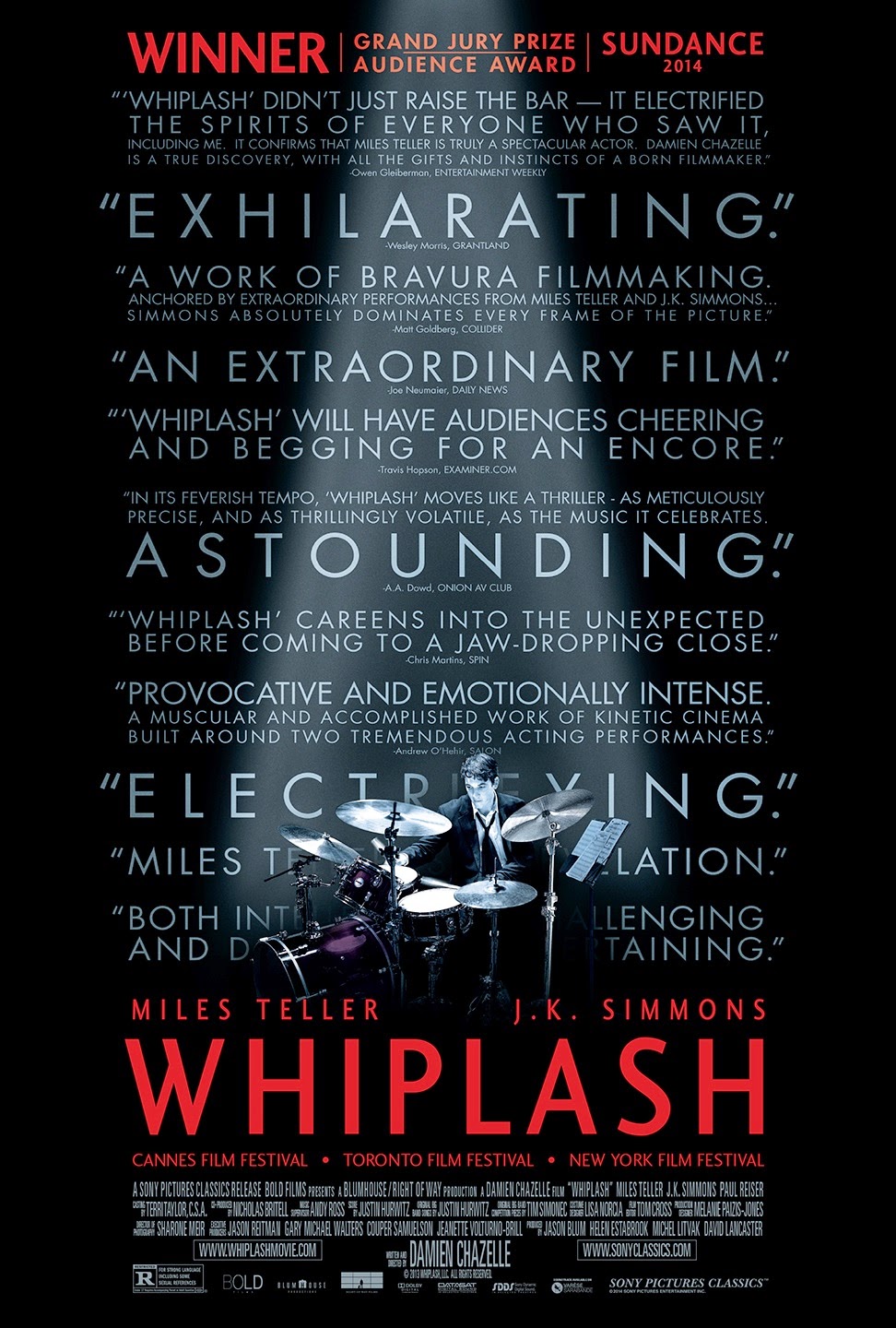 A famous tale in jazz circles involves a young Charlie Parker screwing up during a performance with Count Basie Orchestra drummer Jo Jones and Jones becoming so incensed he throws a cymbal at him. In the more flamboyant versions of the story, Jones "nearly decapitates" the young saxophonist.

It is a transformative moment for Parker. Afterward, he practices. He hones his skills. A few years later, the legend of Charlie "Bird" Parker, one of the greatest sax players ever, is born.

It's a good, strong story, and one we hear repeated throughout writer/director Damien Chazelle's "Whiplash." Yet even within jazz, Bird's story is an outlier, a kind of origin myth.

Before long, we realize Bird's is the only story Chazelle knows, and "Whiplash," for all its virtuosity, is simply variations on a theme. Chazelle turns it into a campfire tale to frighten children.

One supposes Chazelle thinks he's making a movie about music, drive and the correct ratio of inspiration to perspiration needed to create an artistic genius. What he has made is something more primal — a monster movie for performing arts school students.

Watching "Whiplash" is an intense, even harrowing experience, insofar as watching any movie can be said to be "harrowing." It's an experience I'm happy to have had but not one I'm eager to repeat, and it all comes down to the monster that Chazelle and J.K. Simmons create, for which Simmons claimed a deserved Best Supporting Actor Oscar.

And there is no doubt Simmons' jazz instructor Terence Fletcher is a monster. He stalks his prey like a vampire, seduces with manufactured charm and sweet lies, then destroys. To say Simmons delivers a literally mesmerizing performance is only a minor abuse of the world "literally." There is a bit of Svengali here in both the Fletcher character and Simmons' portrayal.

Seen another way, Fletcher is an abusive spouse, although he never claims he will change or do better. He is too subtle for that. With a smile, a laugh and that Charlie Parker story, he lures his victims into giving him just one more chance without ever asking for it. It's seduction at its most insidious.

Fletcher's perfect mark arrives in the form of first-year student Andrew Neimann (Miles Teller), a green recruit with more ambition than sense, aspiring to be the next Buddy Rich and to avoid the fate of his father (Paul Reiser), a failed writer who has settled into a life of domesticated mediocrity.

Neimann's instrument of choice is the drums, and his quest to master jazz drumming reduces to more speed and greater technique. You can't get soul out of the drums the way a talented musician conjures the soul of a trumpet or sax or piano. The drums seem like a lark, or, at most, Neimann's all-too-blunt method of taking out his frustrations. That makes it all the more difficult to believe Neimann's motives are pure. Does he want to be a great drummer, or does he want just not to be his father? Fletcher probably senses what we do when he quizzes Neimann early on and learns no one else in Neimann's family has any musical inclinations. But for Fletcher's purposes, any motivation will do as long as it becomes an obsession. Taunting Neimann about his dad is just one of Fletcher's strategies. Fletcher doles out psychological and physical abuse so extreme it's impossible to believe it could fly under the radar today at any real fine arts school.

But we must remember: "Whiplash" is a fantasy, and the school is the monster's hunting ground.

One can't overstate what an imposing presence Simmons is. The 60-year-old actor makes Fletcher  all muscle and sinew, powered by rage. Neimann never stands a chance. Each time he seems to take initiative or notch a victory, Fletcher is there to end it. Even when we finally reach the Screenwriting 101 happy ending, we can't take it at face value.

Thanks to Simmons, Chazelle has made a great if hard-to-watch movie, just probably not the one he thought he was making. If there were still video stores, "Whiplash" would belong in the horror aisle.
Posted by Franklin at 12:00 AM