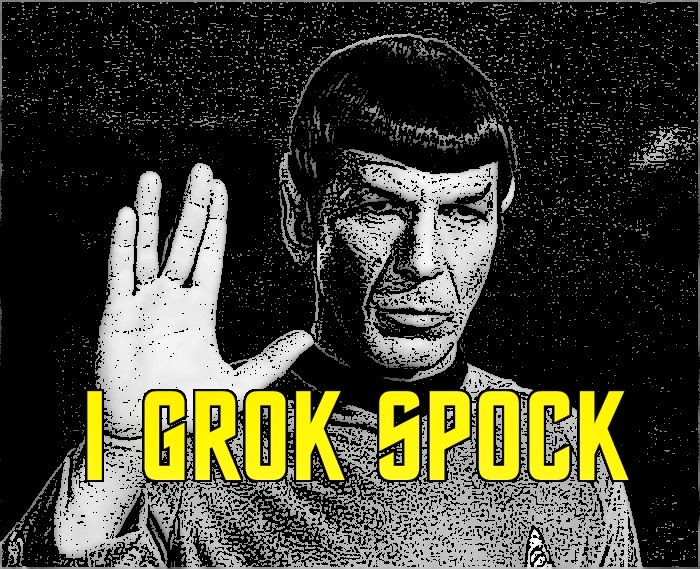 In a season 5 episode of "Star Trek: Deep Space Nine," "Trials and Tribble-ations," the crew of Deep Space Nine travels back in time to the events depicted in one of the original series' most beloved episodes, "The Trouble with Tribbles."

Seeing Capt. Kirk and Mr. Spock walking down an Enterprise corridor, DS9's Dax (Terry Farrell) says, "I had no idea. ... He's so much more handsome in person. Those eyes!"

Avery Brooks' Capt. Sisko says, "Kirk had quite the reputation as a ladies' man."

To which Dax replies, "Not him. Spock!"

Three decades after the fact, "Star Trek" acknowledged what fans had long known: Kirk may have been the "ladies' man," but Leonard Nimoy's Spock was "Star Trek's" real sex symbol.

Nimoy died last week of chronic obstructive pulmonary disease at age 83. The emotional outpouring that followed from fans worldwide was swift and overwhelming. No doubt Mr. Spock would have found the reaction fascinating but also logical.

Like most of his "Star Trek" co-stars, Nimoy was a working actor, paying the bills by taking guest roles in some of the 1960s' most popular TV shows before "Star Trek" came along. Mr. Spock was both a regular paycheck — every working actor's dream — and just another character role.

By the decade's end, Spock was on his way to becoming a cultural icon.

For a certain audience, Mr. Spock made being a geek cool decades before being a geek actually became cool. William Shatner's Kirk was for many of us a fantasy, the guy we'd like to be but knew we never could. He wasn't just a ladies' man. Kirk could go toe-to-claw with a Gorn and still trick a computer into self-destruction. The rest of the Enterprise crew were a multicultural collection of aspirational role models. Yet it was Spock — half-Vulcan, half-human — who most spoke to viewers.

Spock was aspirational, too. He was the smartest member of the Enterprise crew, famously logical, meticulous and curious. Yet he was also an outsider. He was the lone Vulcan on a ship crewed by Earthlings, but as half-human, he was also an outsider even on his home planet. His relationship with his father was strained, his love life was complicated and while he claimed to be in control of his emotions, it's more accurate to say Spock was emotionally repressed by choice.

Spock went beyond being a role model for aspiring science nerds. Here was an adult who embodied all of the fears and insecurities of adolescence, no matter how well he hid them.

It was a role Nimoy embraced. Google "Nimoy fan letter" and you'll find his response to a fan letter he received in 1968 from a biracial girl who couldn't fit in among either whites or blacks. Nimoy speaks for his fictional character, but he could easily be drawing on some of his own experiences, growing up the Jewish kid in an Irish Catholic neighborhood.

He titled his 1975 memoir "I Am Not Spock" in part to show the distance between himself and the character he and many talented writers, especially D.C. Fontana and Theodore Sturgeon, had worked over three seasons to create. But Nimoy and Spock proved inseparable.

Nimoy returned to play Spock in eight movies (counting the two J.J. Abrams-directed reboot films) and in a couple of episodes of "Star Trek: The Next Generation." Even killing off Spock in "Star Trek II: The Wrath of Khan" didn't last. Nimoy also directed two Trek movies as well as the comedy "Three Men and a Baby." He took up writing and photography, and he took on other roles, from Paris in "Mission: Impossible" to, most recently, the enigmatic William Bell in "Fringe." He eventually wrote a second volume of memoirs, this time titled, "I Am Spock."

On Twitter, he invited us to think of him as our grandfather and dispensed grandfatherly advice, always concluding with Spock's Vulcan salutation, "LLAP" — "live long and prosper."

In the end, there is perhaps no better epitaph for Nimoy than the one Kirk provided Nimoy's alter ego in "Star Trek II": "Of all the souls I have encountered in my travels, his was the most — human."
Posted by Franklin at 12:00 AM