Released the same weekend, "Fifty Shades of Grey" and "Kingsman: The Secret Service" look like a classic case of counter-programming. One is a romance — of sorts — that appeals to a largely female audience. The other is a violent, explosion-filled action movie taking dead aim at a young, male and testosterone-charged demographic.

It's like a TV network putting figure skating up against the competition's pro football broadcast.

But looks are deceiving, and "Fifty Shades" and "Kingsman" are as much alike as they are different.

Both movies are wish-fulfillment fantasies. To judge either as a straightforward drama is absurd. Critics realize as much when it comes to "Kingsman," but many do not when it comes to "Fifty Shades." It's an easy mistake to make, because "Fifty Shades of Grey" takes itself far too seriously, which is why it fails to satisfy the way "Kingsman" does.

"Fifty Shades" director Sam Taylor-Johnson has her hands tied. She must, above all else, please a core audience of "Fifty Shades of Grey" readers as well as the book's author, E.L. James, with whom Taylor-Johnson reportedly clashed, if the Hollywood trades are to be believed.

At times, we can see Taylor-Johnson struggling against her constraints. An early scene in which leading man Christian Grey (Jamie Dornan) surprises our heroine, Anastasia Steele (Dakota Johnson), in the hardware store where she works is funny and playful. It's also the one scene where Dornan and Johnson display any real chemistry. It gives us false hope. Otherwise, the only scene where either character feels like a real person is when Ana is partying with her friends — far away from Christian. (Naturally, Christian shows up to ruin the moment.)

If "Fifty Shades" is too serious to succeed as entertainment, it's too tame to succeed as erotica. The average HBO or Showtime series is more daring. The MPAA's habit of branding a commercially crippling NC-17 on virtually any movie that takes sex seriously guarantees that most movies — and especially wide-release films — won't. Anyone hoping "Fifty Shades" will rival Steven Shainberg's enchanting "Secretary" or Adrian Lyne's "Nine ½ Weeks" — or even Zalman King's feature-length fragrance commercial "Wild Orchid" — is in for a disappointment.

The best one can say for "Fifty Shades of Grey" is it dispenses with James' terrible prose. The play-by-play from Ana's "inner goddess" would have rendered the movie an unintentional farce.

The much-publicized scenes of R-rated bondage and discipline are beside the point. "Fifty Shades" isn't about kinky sex. That's window dressing. "Fifty Shades" is a more domesticated fantasy, one in which an ordinary woman tries to heal a damaged man with her love. 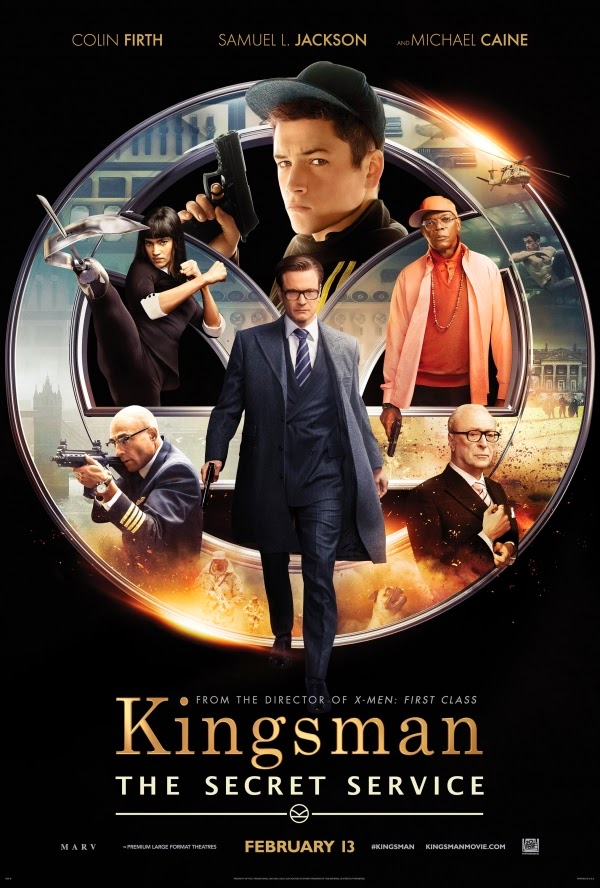 "Kingsman's" wish fulfillment is slightly less far-fetched. It's the fantasy of the boy of modest means plucked from the slums and given a life of gentlemanly excitement and adventure, along with beautiful women falling at his feet.

Eggsy (Taron Egerton) is the clever, good-hearted street tough recruited by Colin Firth's agent Galahad to join a secret organization of super spies who jet around the world looking fabulous, drinking fine Scotch and bedding the occasional femme fatale, all in the service of queen and country.

In this case, it means facing off against a technology tycoon and environmentalist crackpot played hilariously against type by a lisping, blood-averse Samuel L. Jackson.

Like "Fifty Shades," "Kingsman" improves upon its source material. For the second time, "Kick-Ass" director Matthew Vaughn has taken a grubby, unpleasant comic book written by enfant terrible Mark Millar and turned it into a joyously subversive movie. The result is a love letter to the Roger Moore era of Bond movies, mixed with gleefully cartoonish violence and garnished with a raised middle finger pointed at the capital-E Establishment. (How many movies dare imply President Obama is in league with a supervillain?)

"Kingsman" works because it embraces the fantasy "Fifty Shades" merely flirts with. Audiences deserve a movie that goes all the way.
Posted by Franklin at 12:00 AM