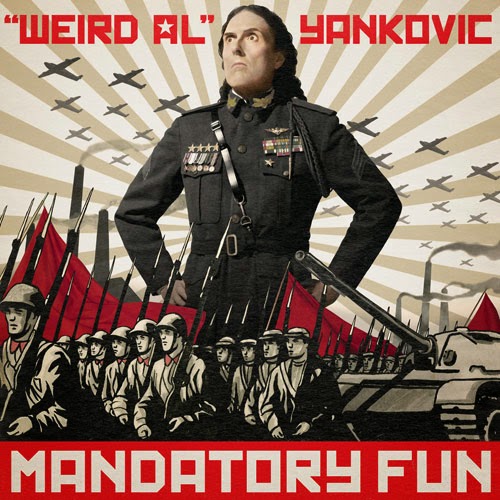 Who would have thought going into it that 2014 would turn out to be the year of one Alfred Matthew "Weird Al" Yankovic?

Weird Al burst onto the music scene in the 1980s with a string of hits, from "Eat It" and "Fat," which parodied the King of Pop, Michael Jackson, to "Like a Surgeon," inspired by the Material Girl, Madonna. But as the age of music videos faded into the past, so too, it seemed, did Weird Al.

Now the King is dead, and whenever Madonna tries to be naughty and outrageous, her longtime fans beg her to stop.

Through it all, though, Weird Al was still out there, parodying everything from grunge to hip hop, and quietly producing albums, some of which charted in Billboard's top 10. We just weren't paying as much attention. Now we are.

Promoted with a batch of music videos released online, "Mandatory Fun," Yankovic's 14th studio album, peaked at No. 1 on the Billboard 200 chart. It became the first Weird Al album to take the chart's top spot and the first comedy album to do so since Allan Sherman's "My Son, the Nut" in 1963. (Hey, hipster! Now there's an album that's probably missing from your vinyl collection.)

Creatively, Yankovic still has it. "Mandatory Fun" is his cleverest, most listenable album since those halcyon days when MTV still played music.

As is his habit, Weird Al doesn't satirize the songs he parodies but uses them instead to poke fun at other things going on in the culture.

"Tacky," Weird Al's parody of Pharrell Williams' inescapable mega-hit "Happy," takes the prize as the track you're most likely to listen to on an infinite loop until your roommate goes insane or smashes your speakers. As the name implies, "Tacky" targets people with the bad taste to wear socks with sandals or twerk in public.

Robin Thicke's controversial "Blurred Lines" becomes Weird Al's wickedly funny "Word Crimes," which lists in detail all the grammatical sins of which you are no doubt guilty. And "Foil," performed to the tune — what there is of it — of "Royals" by Lorde, starts out as a simple ode to the freshness-preserving properties of aluminum foil before taking a sinister turn into the necessities of wearing a tinfoil-lined hat to protect oneself from the Illuminati's mind-control rays.

Other targets of Yankovic's wit include corporate jargon and people who gripe about their "First World Problems." But Weird Al's most biting satire is also his most subtle.

"Now That's What I Call Polka!" is a polka-style medley of pop songs with their lyrics largely unchanged. It segues through Miley Cyrus' "Wrecking Ball," One Direction's "Best Song Ever" and "Thrift Shop" by Macklemore and Ryan Lewis, among others. Stripping them of their catchy hooks and dope beats, and leaving only their banal lyrics, Weird Al — deliberately or otherwise — exposes the extent to which pop music has regressed to the naïve bubblegum infantilism of the late '50s and early '60s. The lyrics are often raunchier but just as trite. They amount to sub-Monkees gibberish. 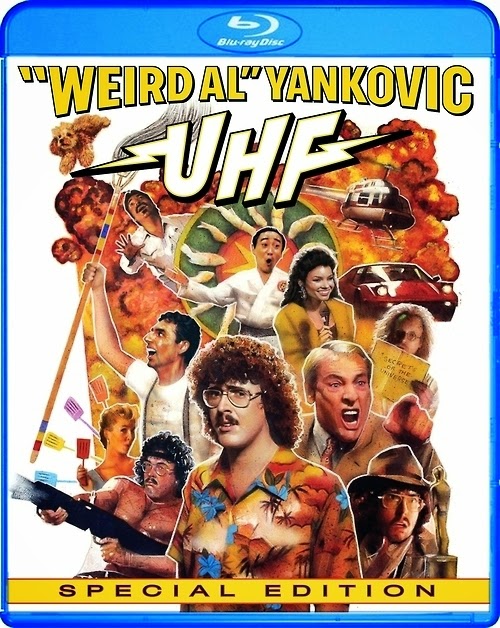 As if delivering the biggest album of Weird Al's career weren't enough, 2014 also delivered an anniversary. This year marks the 25th anniversary of Weird Al's cult-favorite movie "UHF," which makes its Blu-ray debut for the occasion. And, in conjunction, making its DVD debut is Weird Al's 1985 straight-to-video mockumentary "The Compleat Al."

It's all a reminder that, ironically, Yankovic's career has gone on longer and stronger than many of the acts he has satirized. Most pop stars are here today, gone tomorrow. Parody is immortal.

By year's end, floundering electronics retailer RadioShack — whose latest last-ditch strategy to remain solvent bizarrely entails capitalizing on 1980s nostalgia while telling everyone the company is hip and modern — was putting Yankovic in its TV commercials.

I guess if anyone combines hip and modern with '80s nostalgia, it's Weird Al.
Posted by Franklin at 12:00 AM