Culture Shock 04.17.14: 'Oculus' is a clever chiller that exceeds expectations 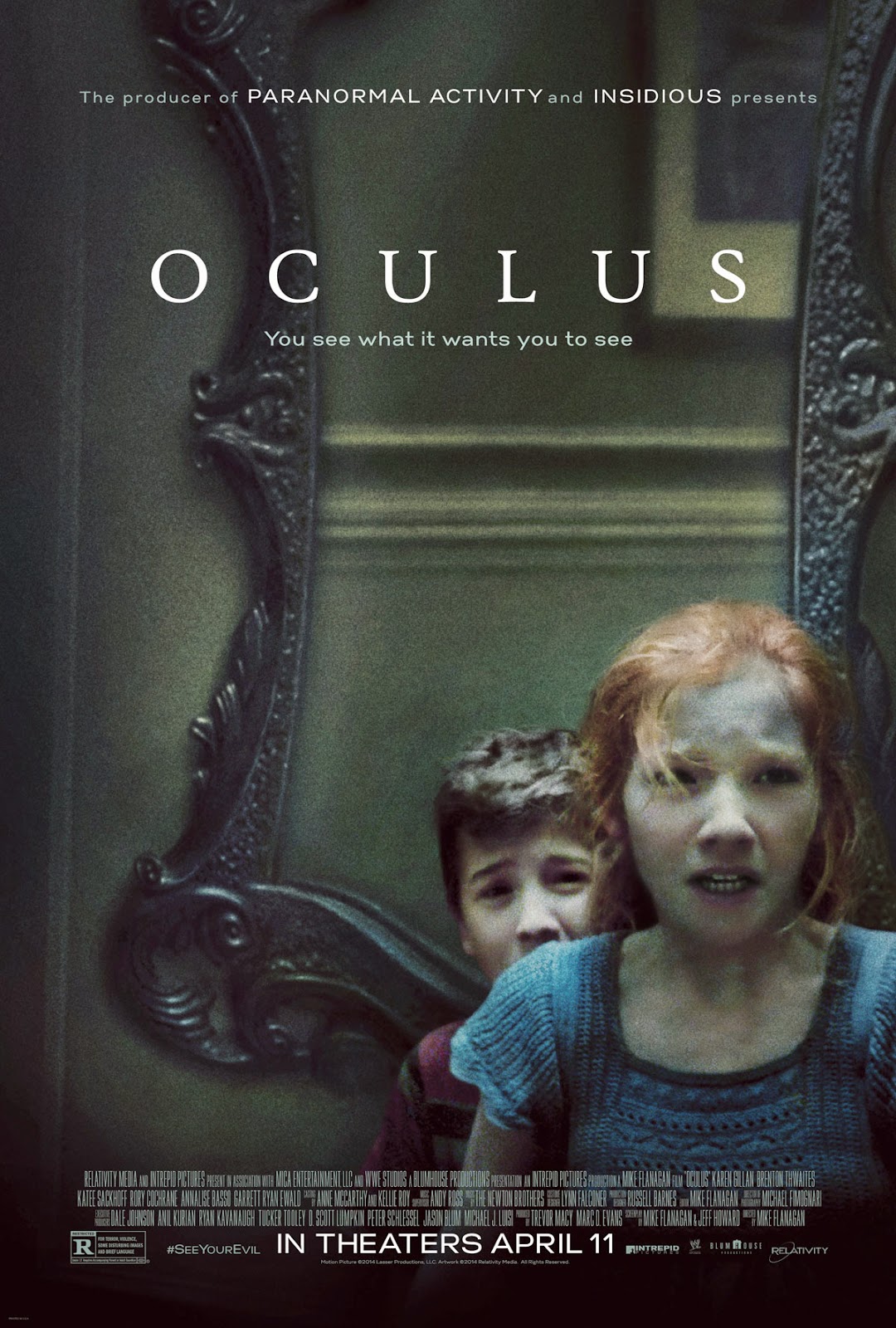 "Oculus” is a creepy, clever horror film that challenges both its cast and the audience to keep up.

The story unfolds half in flashback. We learn that 11 years ago, Alan Russell (Rory Cochrane, "CSI: Miami”) tortured and murdered his wife Marie (Sackhoff). He then tried to kill the couple's two children, 12-year-old Kaylie (Annalise Basso) and 10-year-old Tim (Garrett Ryan).

But Tim managed to grab his father's gun and kill him first. That's the official story, anyway.

Ever since, Tim has been in a psychiatric hospital, where the doctors have helped him come to terms with what he had to do.

In the present day, the now 21-year-old Tim (Brenton Thwaites of the upcoming "Maleficent”) is ready to leave the hospital and start living his life, as near normal as he can. But his older sister (Gillan) expects him to help take care of unfinished business first.

That unfinished business involves an antique mirror their father kept in his home office – a mirror Kaylie believes is possessed by an evil that drove both of their parents mad. But that's exactly the ghost story Tim's doctors convinced him was a delusion, a fantasy concocted by a frightened boy to avoid the reality of his having killed his father.

"They really did a number on your head,” Kaylie tells Tim when she learns he no longer believes in the magic mirror, the ghosts inside it, or that it possessed their father and turned him into a deranged killer.

As far as Tim is concerned, that's crazy talk. What's more likely, he asks, that a couple of scared kids made up a story or that a mirror is haunted? He has a point. Then he repeats the psychological explanation his doctors gave him, how memories aren't like recordings. Instead, they're as much invention as reality. Another good point, and one to keep and mind, if you can.

For Kaylie, who bounced between foster homes and endured the taunts of classmates, the mirror is an obsession. It's implied she took a job in an auction house just so she could track down the mirror, which was sold off following her parents' deaths. Now the mirror is in Kaylie's possession at last, and she has just a few days before it goes off to its next unlucky owner.

That's a few days to prove the mirror is evil and her father wasn't a murderer but a victim.

Some of the film's most harrowing moments come during the flashbacks, and Sackhoff delivers most of them. The mirror plays with Marie's head almost from the start, toying with her insecurities even as one of the spirits inside it (Kate Siegel) seduces her husband.

Gillan is equally good as the confident and determined older Kaylie, whose ingenious plan to make the mirror reveal itself may be just a bit too ingenious for her and Tim's own good.

Basso and Ryan, as the young Kaylie and Tim, are a pleasant surprise. In a genre where children usually run the gamut from grating to insufferable, they deliver emotional performances that elicit our sympathy rather than our annoyance.

While "Oculus” shouldn't be confused with Oculus Rift, the virtual reality headset recently acquired by Facebook, it does much the same thing. It makes the unreal seem real. Where "Oculus” excels is in making us almost as disoriented as the characters onscreen.

Flanagan's Escher painting of a narrative jumps between past and present, illusion and (maybe) reality. If you come away thinking the story has resolved into a neat conclusion, think again.

Is the mirror even haunted, or is it all a delusion? And if it is a delusion, whose delusion is it?

Even the final scene should keep you guessing. We see through the movie darkly.
Posted by Franklin at 12:09 AM