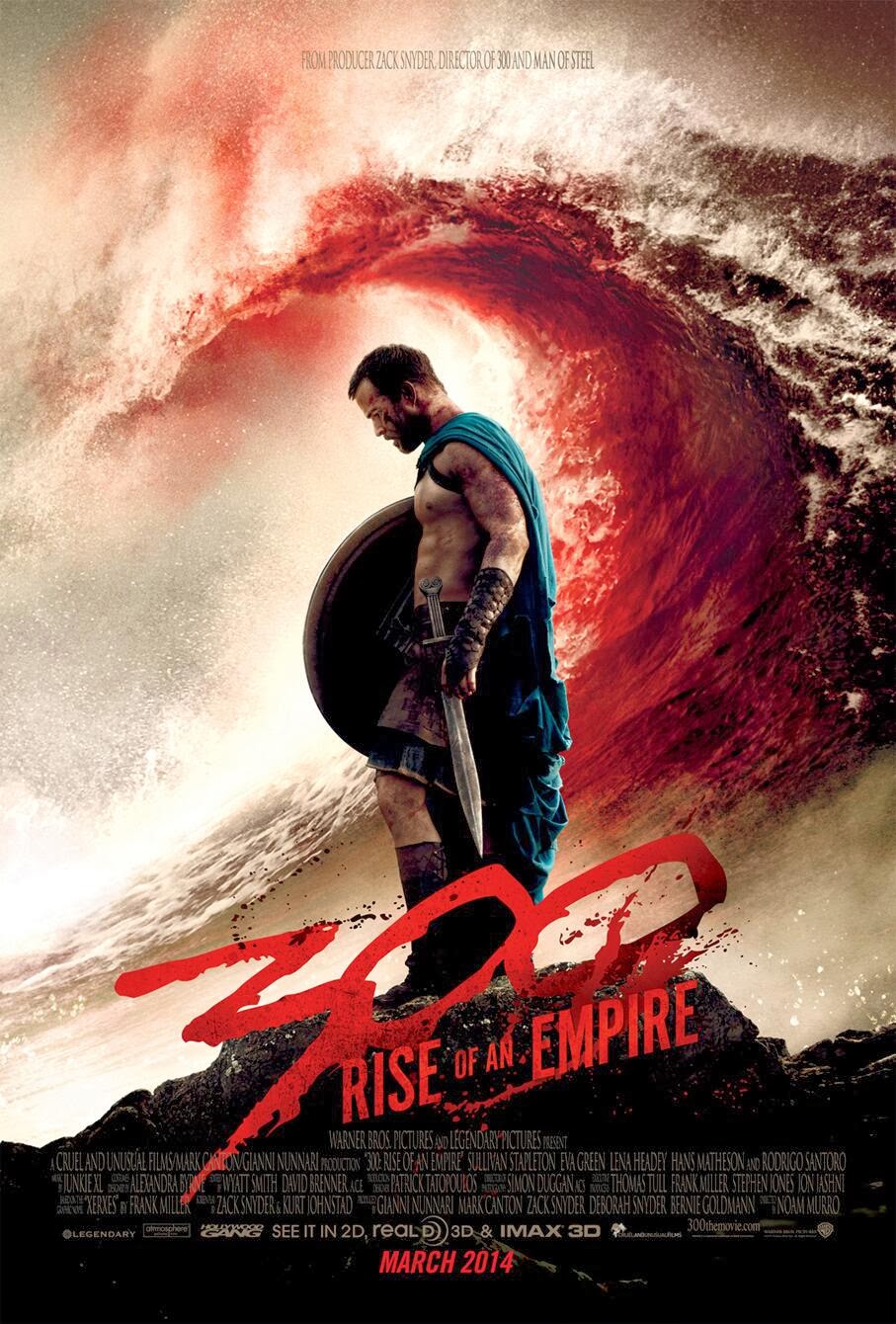 "The Rise of an Empire" could refer to the Persians, led by the "god-king" Xerxes, ruler of history's largest empire up to that time. But this is a tale of the Persian Empire at its greatest extent, not during its rise to glory.

Maybe "Rise of an Empire" refers to the rise of the Athenian Empire? That would make sense.

After defending its freedom from the encroaching Persians, the Athenian democracy would go on to lord it over most of the other city-states in the Athenian sphere of influence. That would precipitate a disastrous war with Sparta and ultimately leave Greece vulnerable to the Macedonians, who conquered Greece, then Persia and finally all of the known world.

History is full of ironies like that. Nations become what they most hate and fear, then fall because of it. One might even draw parallels to the present day, if one were moderately ambitious.

But "300: Rise of an Empire" isn't ambitious at all. It's a movie about people hacking other people to bits in slow motion, while director Noam Murro splashes CGI blood on the screen like a homicidal Jackson Pollock. Either that is your sort of thing or prepare to be bored after the first five minutes. Like the "Matrix" films' "bullet time," the slow-fast-slow butchery of the "300" franchise gets old fast.

There's no shame in making a mindless action movie, even if a little extra effort could produce something more. But there is something shameful about making a mindless action movie that takes itself far too seriously. "300: Rise of an Empire" never cracks a smile, much less a joke. It's all deadly serious business, no matter how absurd it gets. And boy does it get absurd.

When the Spartan Queen Gorgo (Lena Headey) recounts Xerxes' origin story, it sounds like the prologue to one of Stephen Sommers' "Mummy" films. Xerxes (Rodrigo Santoro) goes on a vision quest and returns a bald giant who thinks he's a god. This Xerxes, a caricature created by comic-book auteur Frank Miller, is more supervillain than historical figure. Yet Murro and co-screenwriter/co-producer Snyder intend us to think of Xerxes as terrifying rather than laughable.

Also too serious for his own good is the Greek leader Themistokles (Sullivan Stapleton). In "300," the Spartan King Leonidas (Gerard Butler) is so over the top he explodes into scene-chewing camp. Stapleton's level-headed Athenian is too sober for that. He's a better leader and also a more introspective one, although that isn't saying much. But he isn't exactly interesting to watch.

He's a bundle of warrior cliches, and Snyder's script calls on him to give not one, but two "rally the troops" speeches. Even Shakespeare’s King Henry V wasn't so bold as to give more than one.

None of the characters are developed, and we don't care who lives and who dies. We know the Greeks will win despite the odds, relying on their faster ships, superior strategy and seemingly divine luck. But Murro reduces all that to severed limbs and smashed ships.

The one thing that stands out is Eva Green's portrayal of the Persian naval commander Artemisia.

Green's feral warrior queen, a Greek with a grudge against the Greeks, is a welcome change from the first film's overbearing machismo. Artemisia prowls through every scene like a great cat, owning each second of her screen time. Alone among the cast and crew, Green knows "Rise of an Empire" is a joke. She brings a delightful madness to Artemisia's quest for revenge.

Artemisia has no time for hollow platitudes about democracy or freedom, and when she gleefully kisses the severed head of a general who has failed her, it almost makes enduring the rest of the movie worthwhile. Almost.
Posted by Franklin at 12:02 AM