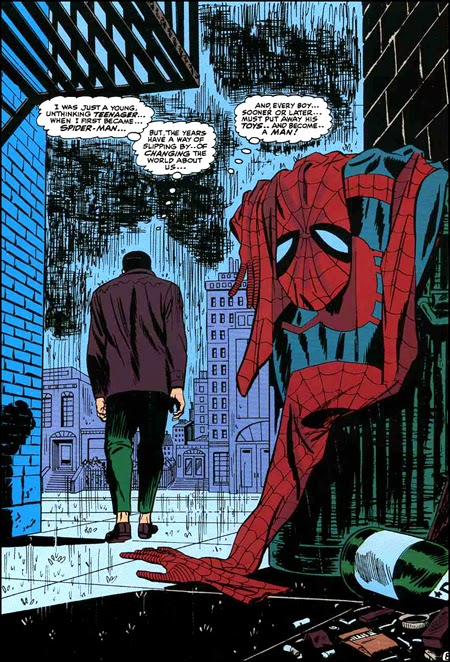 Spider-Man's defining moment isn't one of heroism. Rather it's when he fails to do the right thing.

In an online discussion last week about remakes that miss the point of the original, io9.com's Charlie Jane Anders singled out 2012's "The Amazing Spider-Man" starring Andrew Garfield. Anders wrote, "Amazing Spider-Man was pretty great, but lost the whole 'Spidey tries to make money off his powers' element of the (Sam) Raimi film and the original comics."

Without that element, "The Amazing Spider-Man" resorts to giving Spider-Man the Batman motivation: the not-so-accidental deaths of his parents. That misses the point even more than Anders lets on. It's Spider-Man's moral failing and his reaction to it that make him who he is.

In the origin story Stan Lee and Steve Ditko crafted, Peter Parker, recently bitten by a radioactive spider, uses his new powers the way most of us would. He uses them to make money.

As he leaves a TV studio with his earnings in hand, he refuses to stop a robber, although he could have done so easily. What business is it of his, anyway?

Then his Uncle Ben is killed, and Peter dons his Spider-Man costume to track down the killer, who turns out to be the robber he failed to apprehend when he had the chance.

That's the moment he learns his lesson: "With great power comes great responsibility." He stops trying to profit from his powers and instead uses them to protect the weak and innocent. That's what makes Spider-Man the hero he is. He's brave and selfless — and a sap.

It's not as if he doesn't need the money, and he does have responsibilities he can't fulfill with a punch and a wisecrack. Not a month goes by that he couldn't use some money to pay for his elderly Aunt May's rent or medicine. With a sickly parental figure comes everyday responsibilities.

But no. Peter Parker gives up profiting from his powers because he thinks that is what got Uncle Ben killed, when really it was just being a jerk.

That this is Spider-Man's origin story is ironic given that Ditko was one of his co-creators.

It was during his run as Spider-Man's artist and co-plotter that Ditko became a devotee of Ayn Rand's philosophy, which she dubbed "Objectivism."

Objectivism promotes the virtue of selfishness, in the sense of enlightened self interest. It doesn't rule out helping others, but it certainly doesn't put it at the top of its ethical hierarchy. In her novel "Atlas Shrugged," Rand even has a character explain the virtue of making money.

Money isn't everything in Objectivism. Ditko would go on to pass up more lucrative opportunities in comics in exchange for the freedom to make the comics he wanted to make. But money isn't evil, either. If Ditko were a more subtle storyteller — and I don't think anyone has ever accused him of that — I might think he deliberately intended Spider-Man as a bad example.

Spider-Man is always selfless, and what does that get him? A sick aunt, overdue bills, a dead-end job, a rogues gallery of villains who exist just to kill him and a tabloid newspaper publisher bent on making him New York City's public enemy No. 1.

Maybe if he weren't so selfless, his life wouldn't suck so much. In Ditko's world, Spider-Man is a tragic hero, sacrificing himself for no good reason.

Yet as it happens, Peter does make a little money off being Spider-Man. He takes photos of himself in costume and sells them to The Daily Bugle, passing them off as news. So, when Spider-Man does profit from his powers, he does so under false pretenses and makes the least amount of money possible. How ethical is that?

Maybe the real lesson is with great power comes great stupidity.
Posted by Franklin at 12:12 AM