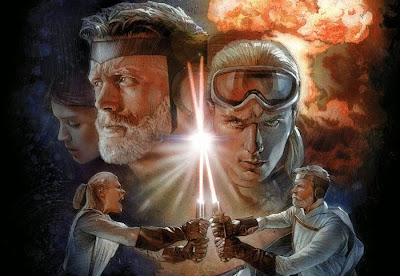 There is something a little bit different about Dark Horse Comics' latest "Star Wars" series, "The Star Wars."

Many of the names are the same, but they belong to different characters. Some of the places are familiar, but they go by different names. A few of the characters look like the ones we know and love, but as Obi-Wan Kenobi once said, "Your eyes can deceive you. Don't trust them."

And what is the deal with that extra "The" in front of "Star Wars," anyway?

"The Star Wars" isn't just any tale from George Lucas' sprawling space saga. It's the original, the "Star Wars" that could have been. It's Lucas' rough draft dated 1974, and despite some half-baked ideas and a lot of clunky dialogue (even by Lucas' standards), it's a fascinating glimpse at what was going through Lucas' head during the early stages of what evolved into his 1977 blockbuster.

Writer J.W. Rinzler and artist Mike Mayhew have adapted "The Star Wars" into an eight-issue miniseries, using Lucas' draft screenplay and some of the original concept designs by Ralph McQuarrie. (Those are the same designs Lucas used to sell 20th Century Fox on making what would become "Star Wars.") The first three issues are now on sale at comic book retailers and via the Dark Horse Comics app for Android and iPad.

In the '74 draft, "Star Wars" isn't yet its own thing. Lucas' influences are still too obvious, and "The Star Wars" reads like a patchwork. The debts to Akira Kurosawa's 1958 movie "The Hidden Fortress" — still apparent in "Star Wars: Episode IV — A New Hope" and more so in "The Phantom Menace" — are glaring. The heroes' hideout is even called "the hidden fortress," making "The Star Wars" seem like almost a remake of Kurosawa's film.

The influence of Frank Herbert's "Dune" novels is also pronounced. In this draft, the Jedi are called the "Jedi-Bendu," a name that recalls Herbert's Bene Gesserit Sisterhood, who, like the Jedi, train from childhood to master superhuman abilities. The Bene Gesserit have "the voice," and the Jedi have their "mind trick."

As for the characters' costumes, with their flowing capes and headpieces, they look like they could have come from the set of an old "Flash Gordon" serial.

The most interesting thing about "The Star Wars," however, is it's as much like the prequels as it is the original trilogy. "A New Hope" and its sequels are the outgrowth of Lucas' best ideas, while the prequels sprang from the leftovers, the stuff that didn't make the cut the first time around. It's no wonder the prequels are so disappointing.

Luke Skywalker is still at the center of the action, but in the form of an older, wiser General Skywalker, who is more Obi-Wan Kenobi prototype than restless farmboy. That fits because he ends up paired with a brash, reckless young padawan named Annikin Starkiller, setting up the Obi-Wan/Anakin Skywalker pairing of the prequels.

The Death Star appears, although it isn't called that, as a launching pad for a planetary invasion rather than as a planet killer. Darth Vader is a battle-scarred warlord in a black suit, but not yet a cyborg Sith lord. The resident Sith is Prince Valorum, whose name Lucas would reuse in the prequels. And Han Solo? Well, he's a lizard-like alien who looks like he might have gone a couple of rounds with Capt. Kirk on Cestus III. (Oops. Sorry. Wrong franchise.)

At least Princess Leia is mostly her spunky self, and Lucas has the bickering between Artoo and Threepio — proof he can do good dialogue when he really tries — nailed from the start.

Because it's a mix of ideas from both the original and prequel trilogies, "The Star Wars" feels more like "Star Wars" than the prequels do. All we need now are some action figures.
Posted by Franklin at 12:00 AM