Culture Shock 11.07.13: How 'Smokey and the Bandit' ended Reconstruction 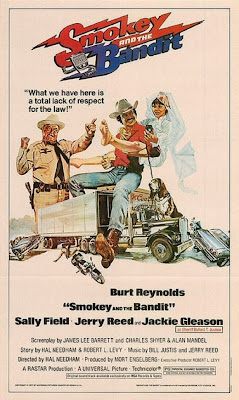 Jackie Gleason's portrayal of Sheriff Buford T. Justice in "Smokey and the Bandit" is so ridiculously endearing, you almost forget what a backward, bigoted, bullying character Sheriff Justice is: Archie Bunker with a badge.

The coyote to the Bandit's road runner, Justice is the Old South reduced to a subject of ridicule. His dogged pursuit of Burt Reynolds' Bandit is the "lost cause" of the Confederacy, and by the film's end, there's not much left of it. Like the sheriff's patrol car, it's gone to pieces. To the extent Sheriff Justice is a lovable curmudgeon, it's because he's also a lovable loser. He's harmless and destined to keep losing ground both to the Bandit and to the New South that the Bandit represents.

Memphis-born stuntman/director Hal Needham, who died last month at 82, probably didn't set out to make anything more ambitious than a car chase movie, but "Smokey and the Bandit" is something far more. It is a quintessentially Southern movie and also a quintessentially American movie, and no film before or since has so excelled at being both.

It was America's No. 4-grossing film of 1977, behind "Star Wars," "Close Encounters of the Third Kind" and "Saturday Night Fever." Like those films, it touched a nerve. On playgrounds across the nation, when not reenacting adventures from a galaxy far, far away, kids imagined what it would be like behind the wheel of a black Trans Am. Answer: pretty cool, actually.

Jerry Reed's infectious song, "East Bound and Down," tidily sums up the plot: "The boys are thirsty in Atlanta / and there's beer in Texarkana / and we'll bring it back no matter what it takes."

To win an $80,000 bet and buy a new rig, Bo "Bandit" Darville and his truck-driving friend Cledus "Snowman" Snow (Reed) have to pick up 400 cases of Coors and deliver them back to Atlanta within 28 hours. Never mind that's bootlegging, which is illegal, it's never been done. So why even try?

"For the good old American life," the Bandit says. "For the money, for the glory and for the fun. Mostly for the money."

"Smokey and the Bandit" hit at just the right time, the year after America's bicentennial celebration and the election of America's first president from the former Confederacy who hadn't first assumed office following an assassination. The history books say Reconstruction ended in 1876, but the South's cultural reintegration into the Union wasn't confirmed until Needham told us it was.

While Needham's South is still home to racist sheriffs, his everyday folks are able to get along regardless of race, gender or creed. They're united by a cause and by the Bandit's larger-than-life reputation.

To stay ahead of the law during his high-speed tour of the Deep South, the Bandit relies on the kindness of friends and strangers alike, whether it's an African American hearse driver who helpfully pulls his funeral procession in front of Sheriff Justice's car or a Japanese truck driver who slices off Justice's driver's side door.

Needham's most meticulously choreographed scene occurs when the Bandit hides from an Alabama state trooper by joining a convoy. The truck drivers who come to his rescue are a cross section of the nation, male and female, young and old. "This isn't a convoy. It's a dream," the Bandit says, and he's right: It's the American Dream.

In this light, the Bandit's "opposites attract" romance with Carrie (Sally Field), a wannabe Broadway dancer who prefers Stephen Sondheim to Tammy Wynette, takes on deeper importance. They don't just come from different worlds, their coming together represents the healing of the nation.

That it's accomplished by fun-loving outlaws and their friends in defiance of official authority seals the deal. Needham brings the nation back together in the same manner it first came together 200 years earlier: thumbing its nose at The Man.
Posted by Franklin at 12:14 AM

Email ThisBlogThis!Share to TwitterShare to FacebookShare to Pinterest
Labels: culture shock, movie reviews, smokey and the bandit, the south