"This series presents information based in part on theory and conjecture. The producer's purpose is to suggest some possible explanations, but not necessarily the only ones to the mysteries we will examine."

From 1977 to 1982, that was your weekly warning to take the next half hour of television with a heaping spoonful of salt. It was the disclaimer that introduced each episode of "In Search of... ." 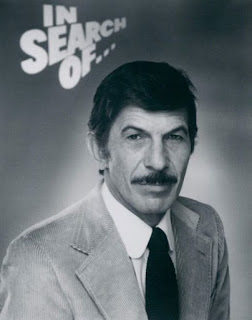 Hosted by Leonard Nimoy, "In Search of..." ran for six 24-episode seasons, and by the time it was done, it had become, in a bizarre way, a record of America's fears and obsessions in the years following Vietnam and Watergate. Before "The X-Files" spelled it out for us, here was a show that dealt in alleged conspiracies and cover-ups, while in search of a truth that was certainly "out there."

Now, for the first time, "In Search of..." is available on home video: a mammoth 21-disc DVD box set containing all six seasons of the original series, all eight episodes of the 2002 Sci-Fi Channel revival hosted by Mitch Pileggi of "The X-Files" and the two pilot episodes hosted by Rod Serling.

Before "Ghost Adventures" and "Ghost Hunters," "Ancient Aliens" and "Finding Bigfoot," even before Art Bell first took to the overnight airwaves with "Coast to Coast A.M.," "In Search of..." brought ghosts, UFOs, the Loch Ness Monster and other paranormal phenomena into homes across America. It caught the zeitgeist of the era, when interest in strange phenomena and the boundaries of science, pseudoscience and fantasy seemed to reach a peak, spurred on by the publication in 1968 of Erich von Däniken's best-selling hodgepodge of mythology and UFO lore, "Chariots of the Gods."

Casting Nimoy as host was a stroke of genius. Then as now associated with his role as the sober-minded and logical Mr. Spock, who better was there to get viewers to take seriously notions like "animal ESP" and the lost civilization of Atlantis?

Almost as important was the show's music, by disco producers Laurin Rinder and W. Michael Lewis, which gave the proceedings an appropriately creepy atmosphere. (That's a soundtrack, issued on vinyl in 1977, begging to be re-released.)

If you believe in the paranormal, this DVD set is like Christmas. Yet even if you are a skeptic — as I am — it is a fascinating, if frustrating, look at persistent myths in earlier stages of their evolution. While Mr. Nimoy's fashions are dated, most of the subjects the show investigates are still fodder for basic cable. They still haven't found bigfoot.

But some "In Search of..." topics are one with their time. If you were born after 1980, you probably don't remember when Americans were terrified of killer bees making their way to the U.S. from South America. Nor do you remember when looming climate change wasn't global warming but "The Coming Ice Age." "In Search of..." tackles both, and makes them seem truly terrifying.

Then there's the Bermuda Triangle. Almost no one talks about it anymore, but the area defined by Miami, the island of Bermuda and San Juan, Puerto Rico, was once known for strange goings on and vanished boats and aircraft. Now, with hindsight and better record keeping, we know this heavily traveled area of the Atlantic doesn't even have an unusually high number of disappearances.

Yet unlike most of the paranormal and conspiracy-theory shows now on the air, "In Search of..." can still surprise you. An episode about the disappearance of Amelia Earhart flirts with the outlandish before settling on a more prosaic explanation. And an episode about the Trojan War is actually too skeptical. The latest archaeological evidence indicates the conflict remembered in Homer's epic poem probably did happen, in some form.

In retrospect, "In Search of..." does give us important insights, just not the ones its producers imagined. It's a slice of life from America at its most paranoid and neurotic.