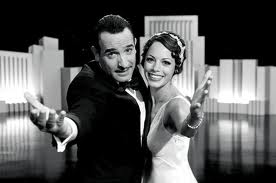 "The Artist" is nominated for 10 Academy Awards and is favored to win at least a couple of the top prizes, including Best Picture and Best Director for Michel Hazanavicius.

That's good because "The Artist" is easily the best of this year's nine Oscar-nominated films.

Otherwise, Uggie, who steals "The Artist" as easily as he might steal a sausage, would end the streak of supporting actor wins Christopher Plummer has racked up this awards season.

The Oscars always say more about Academy voters than they do about the year's best films, so it's best not to take them too seriously — or seriously at all most years.

When the Academy recognizes the year's best film as such, it's usually a happy coincidence. I think the last time that happened was "Silence of the Lambs" in 1991.

We're due for another happy coincidence, and "The Artist" — backed by the Weinstein Company's hype machine — just might provide it. Never mind all that Weinstein hoopla, "The Artist" is a magnificent, magical piece of work.

"The Artist" is set during Hollywood's transition from silent films to talkies, an era Hazanavicius and cinematographer Guillaume Schiffman capture beautifully in sparkling black and white, taking full advantage of the narrow, old-style 1.37:1 aspect ratio to give us gorgeous vertical scenes such as one taking place on a staircase.

George Valentin (Best Actor nominee Jean Dujardin) is one of the silent era's biggest stars, with a trusty canine sidekick (Uggie) and admiring fans such as Peppy Miller (Best Supporting Actress nominee Bérénice Bejo), herself an aspiring actress working her way up from bit parts in chorus lines.

Peppy's timing is perfect. She has a voice for sound, and the studios are looking for new talent to usher in the dawn of talking pictures.

Meanwhile, George's star is fading, and when his studio drops him, he sinks his own money into making a silent movie — just as the Great Depression looms. Not the best of timing for long-shot bets.

"The Artist" features a solid supporting cast, including John Goodman as a cigar-chomping mogul, Penelope Ann Miller as George's disillusioned wife and, especially, James Cromwell as George's faithful chauffeur. But this is Dujardin and Bejo's movie to carry. And because "The Artist," like the movies it honors, is a "silent" film, they do so without saying a word.

Yet the artist isn't really a silent movie. It uses music, sound and silence to create an alternate universe where everyone "speaks" in title cards and spoken conversations are some scary, science-fiction monster from the future, ruthlessly invading the present.

In that silence, too much is left unsaid. George's wife keeps her unhappiness and disappointments mostly to herself. George and Peppy remain quiet about their mutual attraction. And the secrets they keep from each other could lead to disaster for them both.

Hazanavicius may have a nostalgic fondness for the silent era, but in the end he and "The Artist" side with the talkies — and with talking.

If Uggie could talk, he'd say he deserves that supporting actor award.
Posted by Franklin at 1:12 AM