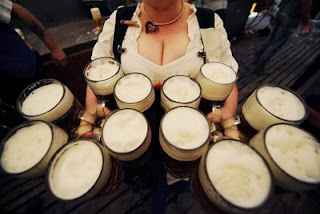 A proposal that state lawmakers once considered dead on arrival now has beer connoisseurs toasting victory.

Last week, Gov. Bob Riley signed into law a bill raising the alcohol content of beer sold in Alabama from 6 percent by volume to 13.9 percent. That has opened the door to a new world of beers that will finally be available here legally.

According to Free the Hops, the grass-roots organization that lobbied for the higher limit, only a couple of the 100 top-rated beers in the world were available in Alabama before the law took effect.

Distributors and stores still have some bureaucratic paperwork to sort through, but the new limit comes in time for the Magic City Brewfest on June 5 and 6 in Birmingham, which will feature a number of previously forbidden brands. Unfortunately, the bill passed too late for Huntsville's Rocket City Brewfest earlier this month.

This victory for beer lovers in Alabama follows years of setbacks. At the end of the Legislature's 2007 session, a similar bill to raise the beer alcohol limit won the Shroud Award as the "deadest bill of the legislative session."

In 2008, another attempt to raise the limit led to one of the most bizarre episodes of political theater ever to play out on the floor of the state House of Representatives. Questioning why anyone would want to allow gourmet, craft-brewed beer into Alabama, Rep. Alvin Holmes, D-Montgomery, uttered the now infamous line, "The beer we got drink pretty good, don't it?"

When informed that some Free the Hops supporters were German employees at the Mercedes plant in Vance, near Tuscaloosa, Holmes exclaimed, "From Germany!"

Mind you, the Germans are serious about their beer. Local legend has it that Cullman County lost the Mercedes plant to Vance because Cullman County is dry.

But this year, the Free the Hops bill finally passed, no thanks to Holmes, who voted no, of course.

Apart from his apparent grudge against the Germans, Holmes is a staunch defender of "the beer we got" — mass-produced brands like Budweiser, Miller and Coors. I guess you could say he's a blue-collar beer guy. And that isn't surprising, given that beer has, until recently, been mostly a blue-collar beverage.

When you think about beer's place in popular culture, you probably think about Homer Simpson chugging mugs of Duff at Moe's bar, or maybe you think about the Bandit hauling 400 cases of bootleg Coors from Texarkana, Texas, to Atlanta while trying to elude Sheriff Buford T. Justice.

Class may have played a role in prolonging the fight to raise Alabama's beer alcohol limit. Overcoming the state's usual religious objections to anything related to beer, wine and spirits would have been easier if all of the state's beer drinkers had thought they had a stake in it. But most probably agreed with Rep. Holmes, and they didn't care about expensive, craft-brewed beers with hard-to-pronounce names.

With most of the state's beer drinkers sitting on the sidelines drinking their Bud Lights, it was up to just the connoisseurs to get the bill passed. But now the fight is over, and Alabama is open to the best beers in the world.

Personally, I'm not too bitter that it took so long, and I'm willing to share the spoils. There'll soon be enough good beer for everyone.
Posted by Franklin at 12:00 AM