Culture Shock 05.14.09: There's no escaping the legacy of being a Trekkie 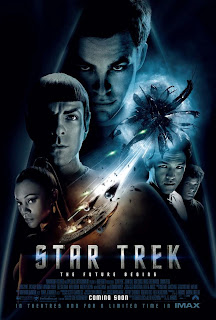 I suspect that no matter what I say about the new "Star Trek" movie, I'm going to come across like a deranged Trekkie.

If I say I love it, that means I'll lap up anything with the name "Star Trek" attached. If I say it sucks, however, that just means I'm an obsessive fanboy who can only nitpick the new movie for failing to live up to the sainted Gene Roddenberry's vision.

All of you newcomers to the "Trek" franchise have it easy. If the new movie is your first encounter with the USS Enterprise and its crew, no one is going to fault you for either liking it or hating it. But if you're an old-timer like me, there is no getting away from the past.

Regardless of what I think about director J.J. Abrams' reboot of the "Trek" franchise, it's seemingly impossible for me to escape all of the stereotypes built up in the past 43 years of "Trek" fandom. Middle-aged men who wear Spock ears. A woman who showed up for jury duty wearing her homemade Starfleet uniform. Couples whose wedding ceremonies were conducted in Klingon. Trekkie obsessions take the form of "infinite diversity in infinite combinations," as the old Vulcan saying goes.

As for me, I've never been to a "Star Trek" convention. I've never worn a Starfleet uniform, and I can barely read Klingon, much less speak it. I'm just a guy who has seen every episode and every movie and maybe read a "Star Trek" comic book or 20. So what if I can quote "The Wrath of Khan" pretty much verbatim? I can do the same thing with "Smokey and the Bandit" and "Raiders of the Lost Ark." Does that make me a freak?

If you prick me, do I not bleed? Is my blood green?

This is my Kobayashi Maru — the "no-win scenario" made legendary in "Star Trek II: The Wrath of Khan." But like Capt. James T. Kirk, I don't believe in the no-win scenario.

So, what's my verdict on the "Star Trek" reboot? It's OK. It's not terrible, like "Star Trek V: The Final Frontier" or the two last "Next Generation" films, "Insurrection" and "Nemesis." But don't let the hype fool you because it's no "Wrath of Khan" or "First Contact," either. Abrams has given us a film that, by "Trek" standards, is pretty much middle of the pack.

The new "Trek" gets a lot of things right. Zachary Quinto ("Heroes") gives a credible performance as the young Mr. Spock, and Karl Urban is near perfect as Dr. McCoy. After a while, even Chris Pine's Capt. Kirk starts to grow on you, even if he doesn't attempt to channel any of William Shatner's staccato delivery and Canadian accent, which is almost certainly for the best. No one is going to out-Shatner William Shatner.

Still, these are not exactly the same characters I grew up with. The plot involves an insane Romulan captain (Eric Bana), who travels from the 24th century to the 23rd century and changes history, creating an alternate timeline. The main fallout is that Kirk grows up without his father and seems destined never to become captain of anything — until, that is, he's challenged to enter Starfleet Academy.

Fortunately, the original Spock (Leonard Nimoy) arrives to from the future to set things back on track and, ironically, add a touch of the old-style "Trek" humanism to the proceedings.

But — and you knew there was a "but" coming — Abrams' "Star Trek" suffers from plot holes so large even a cadet could pilot a starship through them and science that's dodgy even by "Trek" standards.

And those are minor faults compared to some of the decisions Abrams and the screenwriters make. Turning the young Chekov (Anton Yelchin) into a hyperactive Wesley Crusher clone is not a good idea, nor is giving Scotty (Simon Pegg) an Oompa Loompa for a sidekick. Meanwhile, poor Eric Bana's Nero will go down as one of the least inspired villains in "Trek" history. He has no good lines and almost nothing to do but growl occasionally.

Still, "Star Trek" is an enjoyable thrill ride, and it sets up sequels that have a brand new "Trek" universe to play in.

Anyway, those nagging faults probably won't bother anyone but deranged Trekkies — like me. And who am I kidding? That's what we Trekkies live long and prosper for.
Posted by Franklin at 12:00 AM