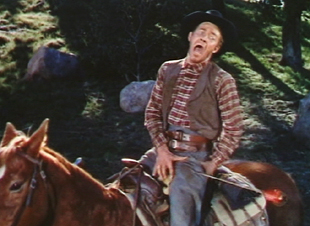 What would the movies be without screams?

The thought of it is almost too terrible to entertain. It's like imagining Sonny without Cher, Oats without Hall or Garfunkel without Simon. And we don't have to imagine any of those. We know exactly how bad they are.

Often, screams make the movie, especially horror movies, where bloodcurdling screams of sheer, abject terror are a necessity. A subset of Hollywood actresses is even known for their ability to scream on screen. "Scream queens," they're called.

But one scream has taken on a life of its own. You've heard it. In fact, you've heard it probably dozens of times, even if you've never heard of it.

Among Hollywood sound editors, the scream is legendary. It even has a name. It's the Wilhelm scream.

The Wilhelm scream was originally recorded for "Distant Drums," a 1951 Warner Bros. film starring Gary Cooper. It makes its debut when a character is eaten by an alligator.

The scream is, needless to say, distinctive. Unfortunately it's impossible to get across in print. But I'll try. It goes something like "aaaaAAAAuuuuhhhh!"

If, however, you prefer a more lifelike — or, in this case, death-like — example, an audio file of the scream is available on the Wilhelm scream's Wikipedia page.

The scream didn't get its name until its second appearance, in the 1953 Western "The Charge at Feather River." In that film, an arrow strikes a minor character, named Wilhelm, in the leg. Wilhelm, of course, screams, as people with arrows in their legs tend to do. The rest, as they say, is history.

Today, the Wilhelm scream is more famous than either of the first two movies in which it appeared. A band is named after it, YouTube videos celebrate it and nearly 150 movies feature it in one way or another. And the list is growing.

I was reminded of the Wilhelm scream last weekend, as I was indulging in a marathon viewing session of the British sci-fi series "Primeval," which is currently airing on the Sci-Fi Channel. Wilhelm gives a big shout-out once every episode. If you're playing a "Primeval" drinking game, taking a shot whenever you hear the Wilhelm scream is a must — along with taking a shot whenever a character goes in search of a dangerous prehistoric predator without taking along a firearm. But that is another column.


The Web site Hollywood Lost and Found has done an excellent job of uncovering the Wilhelm scream's history, along with cataloging the films in which the scream appears. Over the years, the Wilhelm scream has become something of an inside joke among sound editors, who insert the scream, where appropriate, as a way of saying "hi!" to their peers.

At first, the scream appeared only in Warner Bros. films, but by the 1970s it was seemingly everywhere. It's used in the "Star Wars" films and the "Indiana Jones" movies. You say you have a Nazi falling out of a truck and onto the hood of a jeep? That sounds like a job for the Wilhelm scream. A stormtrooper falling down a Death Star shaft or an alien falling into the Sarlacc pit? That calls for a Wilhelm scream.

In space, no one can hear you scream. Unless it's a Wilhelm scream.

Cropping up mostly when movie characters fall from great heights or die in explosions, the Wilhelm scream, unlike those characters, refuses to stay down. And sometimes it even shows up in a situation like the one for which it was originally intended. In "Indiana Jones and the Temple of Doom," the third and final time the Wilhelm scream appears is when the villain is eaten by alligators.

The scream has been a part of films as diverse as "Kill Bill, Vol. 1" (in which it appears at least twice during the same fight scene) and "Toy Story" (Buzz Lightyear knocked through a window).

But what of the man who recorded the scream in the first place? No one knows for sure, but the best evidence suggests the real-life "Wilhelm" was Sheb Wooley, who is best known for the song "The Purple People Eater."

I bet if someone were eaten by a Purple People Eater, the last thing out of that person's mouth would probably sound like a Wilhelm scream.