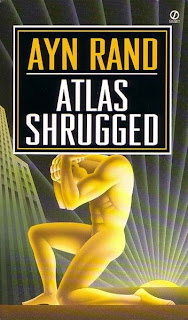 More than 50 years after its publication, Ayn Rand's bestseller "Atlas Shrugged" is again moving up the sales charts.

According to The Economist, "Atlas Shrugged" has reached as high as No. 33 on
Amazon.com's best-seller list, briefly topping President Barack Obama's "The Audacity of Hope."

Renewed interest in the novel began with the economic downturn, starting with the Federal Reserve's interest rate cuts last year. Sales spikes then coincided with the mortgage and bank bailouts, and the passage of the president's economic stimulus package.

Every time the economy takes a hit or the federal government grows larger, new readers flock to Rand's novel. But why, after all this time, is Atlas still shrugging?

Although set in the 1950s and somewhat dated by its focus on the railroad industry, "Atlas Shrugged" still reads like dystopian science fiction, describing a near-future world on the brink of economic collapse as governments restrict, regulate and expropriate private businesses in a failed attempt to keep the system going. To a lot of people, apparently, that near future seems a lot like now.

In the novel, the few businessmen, artists, thinkers and other producers who have not compromised their principles or been co-opted by the government go on a "strike of the mind." Tired of being taxed and regulated, they abandon their companies and other projects. They deprive the world of their creative talents. And, eventually, they join the book's mysterious hero, John Galt, in a secret hideaway. There, they watch as the world crumbles and plan their return, when they will rebuild along lines that respect the individual, creativity and, by implication, laissez-faire capitalism.

Over the years, Rand has taken a beating both for her literary talents and her philosophy of rational self-interest, which she called Objectivism. A small number of academic philosophers treat Rand's ideas seriously, and I was a student of one of them at Auburn University in the early 1990s. But the official Objectivist movement, led by the Ayn Rand Institute, hasn't served Objectivism well, instead treating Rand's novels and essays as holy writ.

Yet, as a literary figure, Rand endures, to the consternation of the literary establishment. She was born in Russia, and her novels, especially "Atlas Shrugged" and "The Fountainhead," combine the scope of Russian epics with a distinctly American pulp style. They are an odd mix of both highbrow and lowbrow sensibilities that continue to enthrall and inspire readers. Rand even weaves science fiction into her works, especially "Atlas" and her novella "Anthem," which was reprinted in a 1953 pulp sci-fi magazine.

Rand's sometimes unlikely admirers include Angelina Jolie and Brad Pitt. Jolie is among the contenders to star in a movie version of "Atlas Shrugged," which is in development at Lionsgate for a tentative 2011 release. Perhaps the novel's newfound popularity will finally get the long-delayed project in front of the camera.

There is a bitter irony to Rand's resurgence. Most if not all of the blame for the U.S. economy's woes lies with former Federal Reserve Chairman Alan Greenspan, a former acolyte of Rand's. Many of Rand's other followers — and economists sympathetic to Rand's pro-capitalist politics — have denounced Greenspan as a sellout, some warning beforehand that his policies would lead to trouble. Certainly, the Greenspan who wrote in favor of the gold standard and against the Fed in the 1960s, when he was part of Rand's inner circle, is hard to square with Greenspan the Fed chairman.

It makes you wonder if Greenspan ever imagined himself as one of Rand's villains, because he makes for a pretty convincing one.
Posted by Franklin at 12:00 AM