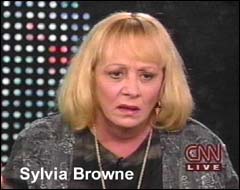 Shawn Hornbeck's parents received the best possible news when their son was found alive more than four years after his abduction.

For self-proclaimed psychic Sylvia Browne, however, the news was not so good.

In February 2003 on "The Montel Williams Show," Browne told the Hornbecks that their son was dead. She described his killer and even said where his body could be found.

Yes, as it turned out, Shawn Hornbeck wasn't dead, his abductor looked nothing like the man Browne described, and Shawn's body, obviously, wasn't buried anywhere. That's three strikes right there.

Of course, Browne's standard disclaimer is that she isn't perfect and only God is right 100 percent of the time. But you would at least expect a person with true psychic powers to be able to predict the future with greater accuracy than you'd get by pure chance.

For years, James Randi, a professional magician and debunker of paranormal claims, has offered a $1 million prize to anyone who can demonstrate psychic abilities under scientific, controlled circumstances. So far, he's had no takers. Browne once agreed to take Randi's test but later backed out, he says.

But in her book "Prophecy: What the Future Holds for You," Browne claims an accuracy rate of near 90 percent. So, why the fuss about someone else testing her rate?

Perhaps it's because others who have kept track of Browne's public predictions give her far from a passing score. You'd be better off flipping a coin. Maybe that quarter in your pocket is psychic?

Give credit to CNN's Anderson Cooper for being willing to take on Browne, and for apparently forcing the issue with his colleague Larry King, who too often has given Browne an unchallenged platform for her predictions.

Of course, the Hornbeck case isn't Browne's first high-profile miss. In 1999 on "Montel," she told the grandmother of Opal Jo Jennings that her granddaughter had been abducted by a white slavery ring and taken to Japan. Opal's remains eventually were found not far from where she disappeared, and an autopsy determined she had been killed soon after her abduction.

Browne, of course, is just one of many self-proclaimed psychics claiming the ability to see the future and talk to the spirits of the dead. But there is no evidence any of them, from John Edward to James Van Praagh, is doing anything more than cold readings, an old carnival trick any halfway competent magician can perform.

The trick is to throw out pieces of information and slowly draw more information from the person being "read," allowing the cold reader to make educated guesses based on the information he has learned.

With practice, you can learn cold reading, too. But being a good cold reader doesn't mean you have paranormal powers. In fact, it probably means you don't.

Only Browne knows if she really believes she is psychic. But if she does, she shouldn't object to having her abilities submitted to a scientific test. Hopefully, there won't have to be another Hornbeck case before TV personalities like Montel Williams decide to stop giving people like Browne a free ride.
Posted by Franklin at 12:00 AM